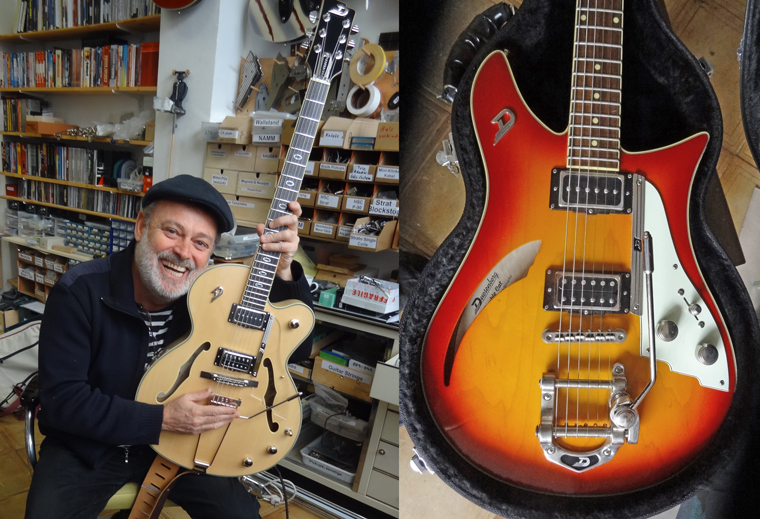 Here's Pablo Carbonell with his new Imperial Custom and his long-loved Double Cat.

Pablo not only comes from the highly respected olive oil family of the same name, but is a very well known musician, singer and comedian in Spain, and a very likeable person to boot. He had once written a song that he himself did not want to publish. So he got Raimundo Amador to record it, and it was a great success for both of them. The refrain of this song was: Que gustito para mir orejas! In German: What joy for my ears! So you can't imagine anything yet, but in the context of the lyrics it comes out that the singer's head, or rather his ears, are pressed between the thighs of a woman during the act of love. Oh how wonderful, these Spaniards!

There is another story about Pablo: He lived in Zahara de las Atunes in the house next door to the Gran Wyoming, which Paloma and I were allowed to occupy during the renovation of our new domicile in Cadiz. One day, upon arrival, we noticed that something was amiss: noodles on the front steps, the door unlocked, the big TV no longer in the living room. No signs of burglary, but various things scattered on the floor. Strange. I opened the patio door, stepped out onto the lawn that lines the swimming pool, looked to my left at Pablo's patio, and discovered that the door window had been smashed. I cautiously entered and suddenly found myself in total chaos. Everything torn out of the drawers, scattered on the floor up to the top floor. In addition, leftover food on a table in the basement. The burglars were certainly not here for a short time. 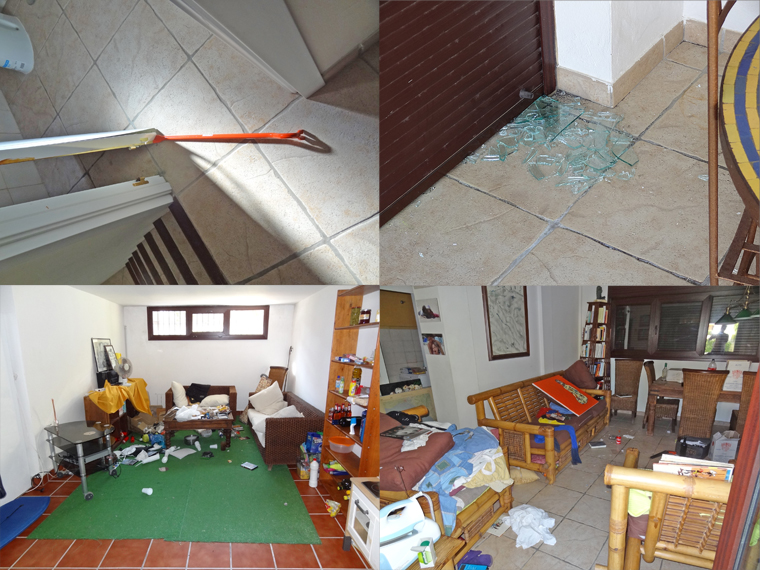 So we immediately called the Gardia Civil in Barbate (Atun y chocolate - (representing tuna and hashish), which moved in about an hour later. And of course I called Chechu (Wyoming) and told him that quite obviously someone had broken into his house. And at the very least, the television had been stolen. "Is the guitar still there?" was his first question. "None to be found in the house" I returned curtly. It was not exactly a cheap classical guitar, annoying. Chechu gave us Pablo's phone number, saying that he once gave him a spare key to his house.
So, as the Guardias also concluded, the burglars must have used that key to get into Wyoming's house, where they took those two valuables. In addition, during our last stay, for the purpose of repairing a heavy room door, I had bought a solid lifting tool, which was no longer in the basement. They must have used it to lever the television out of the wall. In any case, this lifting tool was now in Pablo's house, where they had apparently used it to pry other things loose. Pablo and Chechu, two extremely prominent Spaniards. So we had daily police visits for the next few days. But neither guitar nor television ever reappeared. And Pablo soon sold his house.

This corner between Cádiz and Tarifa is simply fantastic! 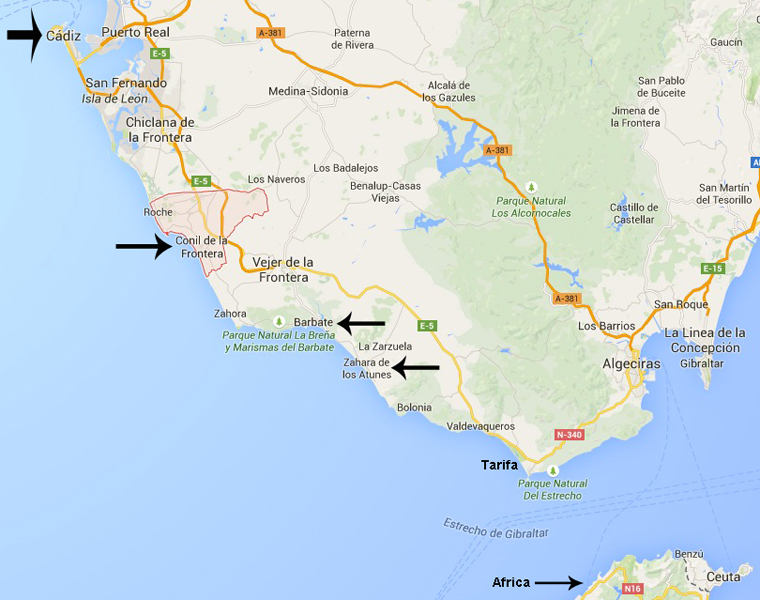 And especially in summer Zahara de los Atunes has its special charm, but between the end of September and the end of April it becomes rather a ghost town. Then, however, the "Almadraba" begins here: The fishermen use a traditional method to get the tuna out of the water, which come to spawn in the Mediterranean Sea around this time. They do this with a sophisticated technique: the tuna are encircled with nets and several smaller boats and then hoisted on board. 85% of them allegedly go immediately to Japanese ships, where the "atun" is frozen and then auctioned off at the fish market in Tokyo at horrendous prices. The act of killing is much more humane than, for example, the Italians. The Spaniards only hit the animals on the head so that their blood remains in the body. The Italians let them bleed out - red colored sea ... 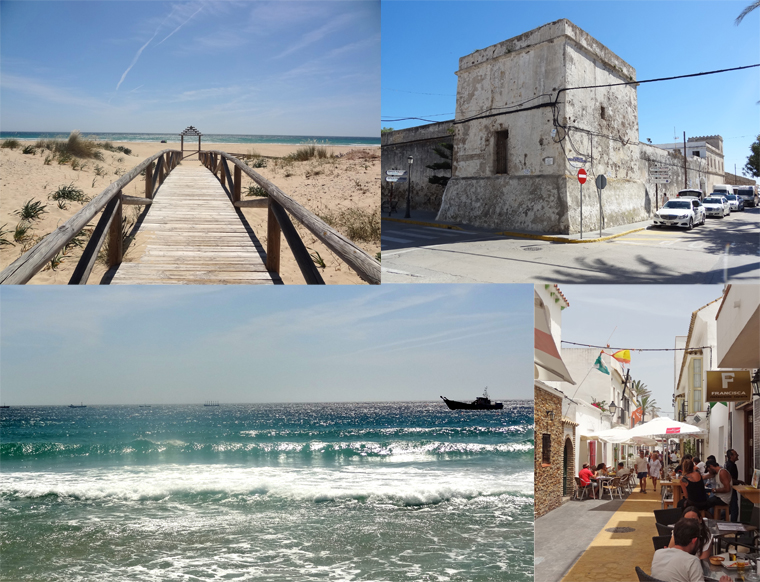 Raw tuna in finest Almadraba quality can be enjoyed here at "TRASTEO". The chef is extremely creative and also runs the restaurant "KULTO" in Madrid. 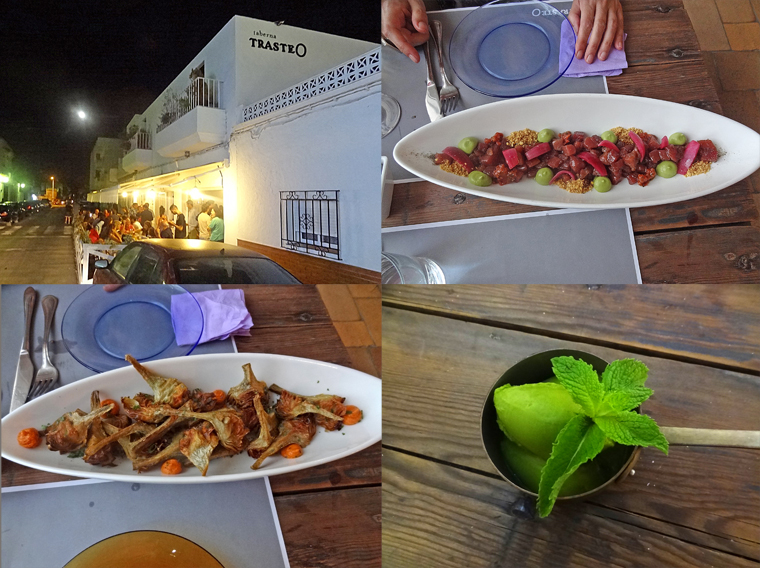