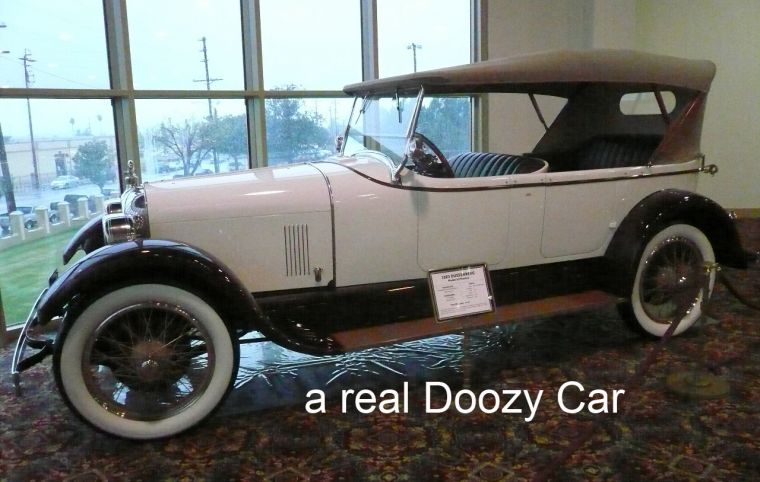 NAMM-Show and Frankfurt, again the usual, but as always an entertaining week. And I found a historical poster on a stand showing Eddie Van Halen with a Kramer double neck guitar, equipped with our old Rockinger Tru Tune tremolo. We also visited a car museum, where you could also see some old Duesenbergs and other impressive design mobiles. 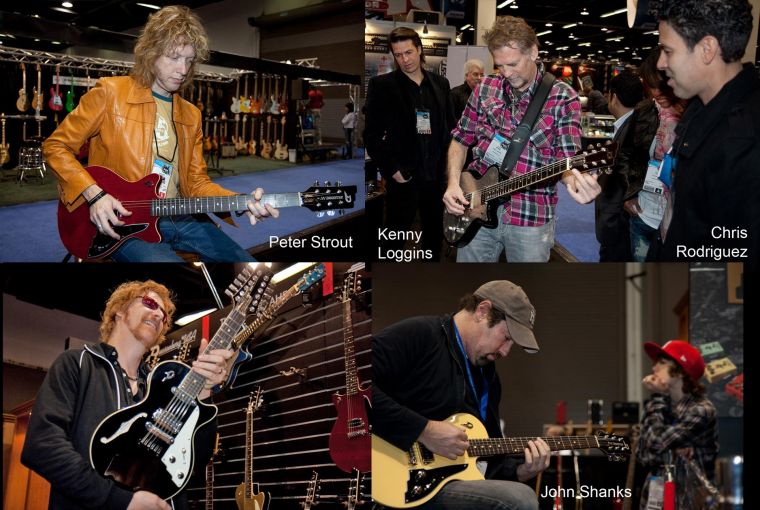 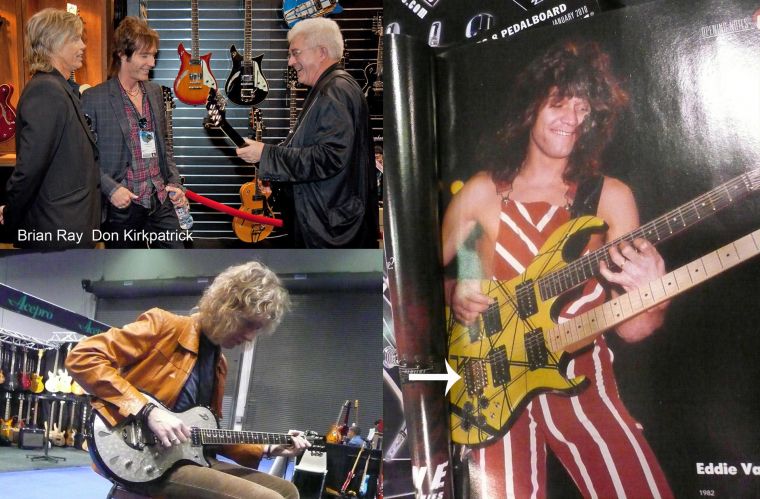 The American is apparently not able to provide reasonable sockets like our Schuko system. Without support it is practically impossible to plug in the charger of an iBook. That simply falls out. But instead we were three steps ahead of Duesenberg-like "Three Steps Ahead". Yes, this slogan elegantly replaced Nathan's "Not Only Works Of Art ...". To complete the picture: our first slogan was "Guitars For Heroes", created by the genius Harald Kadagies. 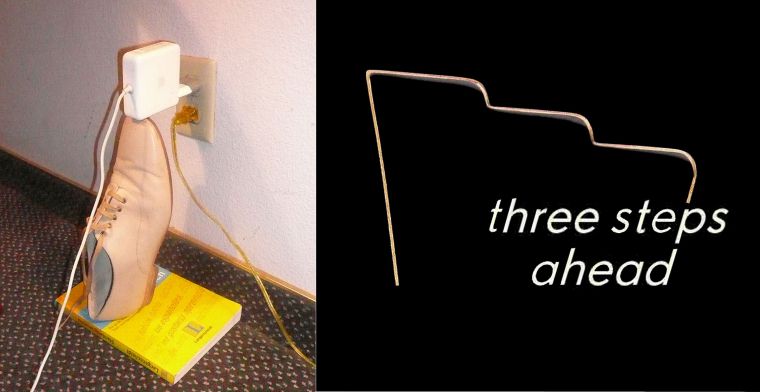 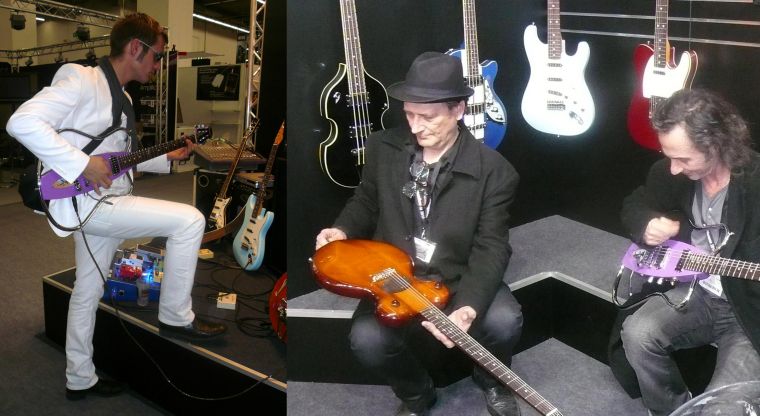 Here our new Roger "Saturn" was admired but not bought. And the "Tittcaster" was more of a decoration piece anyway! 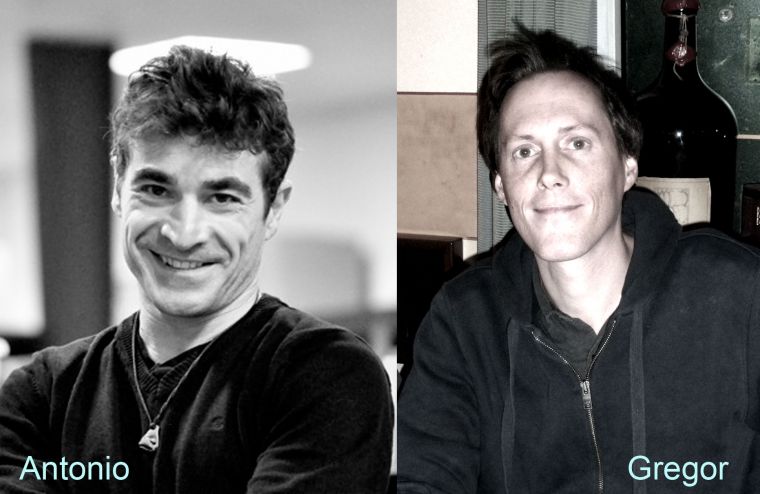 In the meantime, the Viennese Gregor Riefler and the Italian Antonio Ianella had taken up work as luthiers in Hannover. In addition the Hanoverian Andrej Lillak, who always reminds me of the Barça footballer Neymar, as an apprentice. Even more fresh wind in our company.

And when it came to the company, Ines and I were in Hanover from time to time, where I gave her a room in my Oesterley workshop for her artistic work and provided her with the necessary tools and equipment. Meiomei, a sheet metal cutting machine and a huge welding machine with which one could have even welded stainless steel. 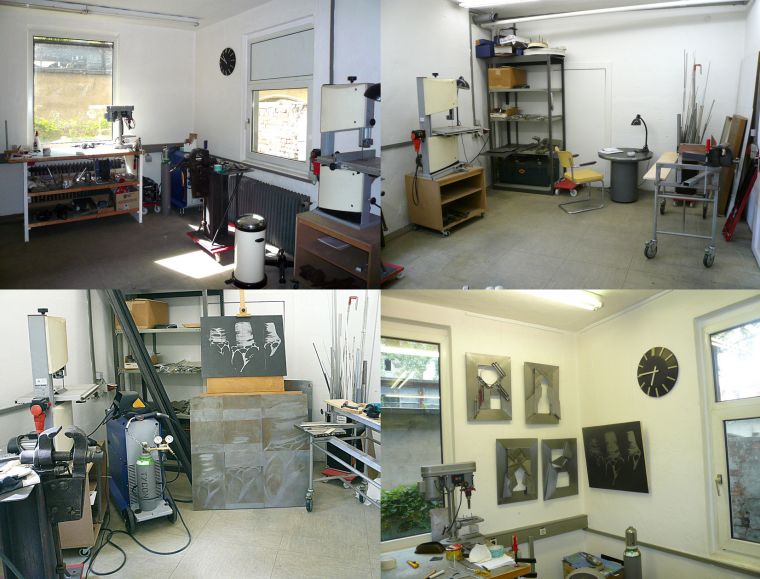 This could have gone on really well, but at some point we got into trouble. Dieter G.: too much noise, too many phone calls, visits from Madrid musicians, too much unrest. It's a very ugly pressure when you don't feel you're suffering in one place anymore. So I said: "If it bothers you, I'll just find my own place nearby. I soon found that, and when I signed the lease, it wasn't right either, and we separated more or less amicably. After a little more than three years. That's just the way it can happen. A pity! Heinz Rebellius had visited us shortly before and wrote this nice story for guitar & bass. You have seen it.

Dieter, el Aleman, the German, all alone in the big Madrid. A restless, but also very creative year. All sorts of useless female acquaintances, nothing really. 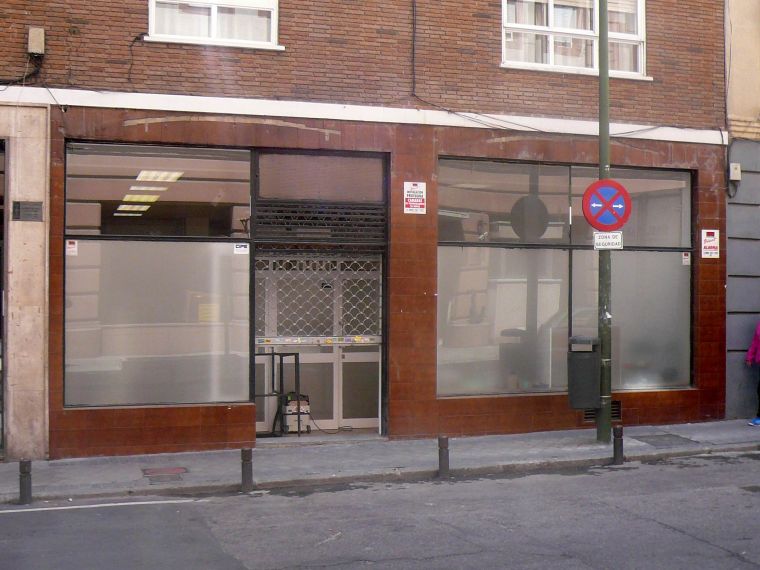 Fortunately I had a favorite pub, the "Cacu", which was very close to my heart. A bunch of crazy people from all over the world hung out in this tiny place. In the barrio) but it went downhill. The neighborhood that had become so familiar to me in the meantime always reminded me a little of "old" Formentera. The best people I loved emigrated or even died. And gradually, the cacu had also lost a lot of its flair. Although a certain positive residual energy could still be felt in this place. Sufficient for my decision: I will stay in Madrid! And I still find Ines' art first class today, and I wish her every success.

I had now found my home and creative space, but it was in a horrible state, and it was empty. First doubts: Had I done everything right? Shouldn't I have gone back to my safe hometown Hannover? But safety, my ass ... safety only lulls, the doing fades. Madrid is not only a capital and a big city, but an impressive, lively melting pot of all cultures. And there was also my second home, this tiny pub.

But first I had to get my new domicile ready. It used to be a store for classic Spanish products like ham, cheese, wine, olive oil etc., but in a street that wasn't really attractive for stores. Also directly opposite the Ministry of the Navy. But the latter guaranteed the possibility of burglary. Everything in the street was monitored by cameras, and the Marineros, in their fear of attacks by the ETA, which had not existed for a long time, even had a kind of "tilt transmitter" that suppressed any radio signals in the immediate vicinity. This meant that Xman could no longer open a modern car by pressing a button on the ignition key. Also starting did not work anymore in some newer stool cars. Luckily I was not affected by this with my 88 BMW.

A whole side wall of my first floor was completely tiled, horrible ornaments, which also generated a horrible echo in the room-reverb. The back part, which was located under an illegally built gallery, I had partitioned off for my bedroom with an integrated bathtub/shower. On top of the gallery I had the kitchen installed. It was not easy, but the best thing you could do with this location. And when it comes to the "kitchen" everything has to be the best, because I love to cook with all these specialties that you can buy here.

All this work was done by a Frenchman named Ludo with the help of some Romanian employees. The Romanians are great people and after a short time they speak perfect Spanish, because Romanian is also a Romansh language, extremely easy to learn for these people. 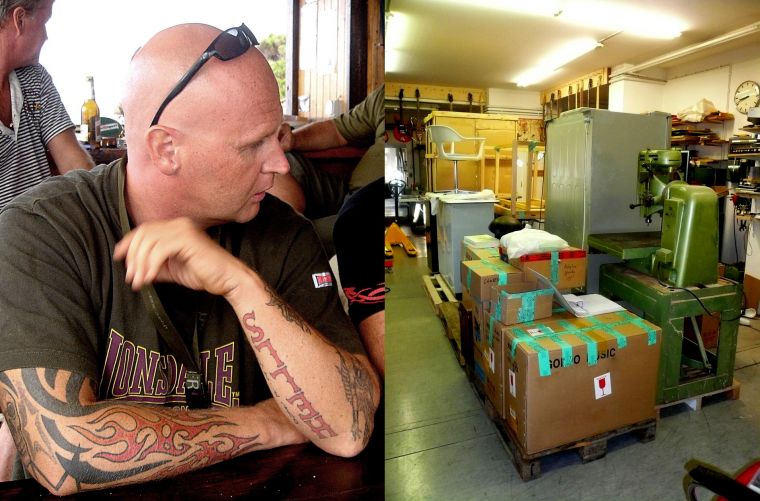 The reconstruction work progressed, but unfortunately not within the time frame I had imagined and planned. On Formentera I had met an exX Hells-Angels guy named Ado who operated a transport company between Düsseldorf and Formentera. A really good and well-read guy with a bald head and lots of tattoos, who finally got away from the Angels. I asked him if he could bring me my stuff from Oesterleystraße to Madrid. Deal perfect, I went to Hannover to pack and load up, his truck arrived in Madrid, but my workshop was far from finished. So we had to put all the stuff provisionally on the first floor, where the Romanians were still plastering and brushing the walls, everything at a distance from the walls, covered with plastic tarpaulins, a constant, nonsensical but unavoidable back and forth. There was even a small freight elevator to the Sotano right at the entrance, which at least saved you a lot of lugging around. Nevertheless: total chaos! And also a fateful characteristic of Dieter G: "I often tend to make early appointments out of pure impatience, which torpedo other work processes that are not definitely scheduled. Take it easy, Dieter! 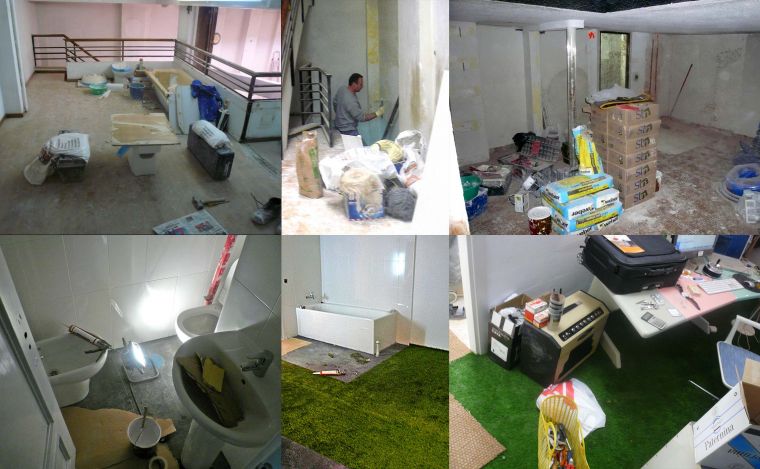 The Sotano was first painted white. But this was too sterile for me, so I asked Ludo and his Romanians to paint some columns and walls in a Panton red-orange. That looked quite passable for a cellar.

Because the Sotano (Southerain or Keller) was where I wanted to position the machinery that was more likely to produce dust and chips. And a sound booth for stress-free practice with the Dooros was out of the question for the time being.

In the meantime, I had gotten to know "Ja-Ja-Javi" ("Yes-Ja-", because he stuttered violently), which always affected me mentally and psychologically, since I had also been a victim of this kind of language defect in young elementary school years. Too much stress at home was my prognosis. Fortunately, I was able to get rid of it very quickly. Ja-Ja-Javi was in any case a good drummer who always had time, lived 200 meters away from me and replaced our first drummer Karim, who was often touring the world as a DJ and therefore was sometimes unable to attend Dooros concerts. No drummer - no concert!
Here you can see Javi and his two adorable rough-haired dachshunds Angelito and Jose-Luis. And on the right in this hot snapshot a French guitar maker Stephan, who ran a store and repair store a few corners away.

And Javi also knew how to design a sound booth and then put this into practice together with the Romanians. Even a double-walled control room window was integrated into a wall. There was only one gloomy part of the work: gluing the thick insulating foam to the DFM walls with spray adhesive. The diluent contained in the glue had a drug-sniffing effect, so that after a short installation time, Javi and one of the Romanians went out into the "outside world" completely drunk. But in the end everything went well, it took much longer than planned, and we had a practice booth of about 14 square meters and could make a lot of noise without having any nerves with the house inhabitants.

In order to fulfill her growing ambition in the field of art, Ines had quit her Isuper job at one of the biggest advertising agencies in Madrid (JC-Decaux - outdoor advertising - also present in Germany e.g. at all airports). However, she only continued to design and produce an annual trophy for the best employees of this company - at the request of her former employer. And since artists - at least in the initial phase - rarely make money, this was a lucrative side business. In order to reduce the production costs of those trophies, I talked to a laser company near Hannover, which already produced metal pickguards for Duesenberg. And the price was hot, cheaper than the previous Madrid supplier.

These trophies were awarded at a huge event. And by the way Ines gave my band our first, sometimes quite triumphant performance shortly after New Year's Eve. My gosh, a real chicky party with all these self-indulgent advertisers.

A real yuppie ball. Who wants to see some of it - Links:
Gimme Some Lovin
https://youtu.be/XSoOYNoNjB4

Break On Through To The Other Side
http://www.youtube.com/watch?v=LoLVSthMpw4&list=UUPH_jCAu4n5hEVMakB_WAJw&index=3&feature=plcpThe thing with "Los Dooros" had of course also its practical aspect: I could test every new guitar creation directly in the structure of my band, so that new insights or deficiencies or advantages could be verified easily.

I had the floor of my bedroom covered with artificial grass. A good foot feeling! Now the most important thing was missing: a decent bed. Best of all in Memphis design, that wonderful creation in the form of a boxing ring! I then had a furniture company reproduce it from DFM board.

Our Lap-Steels were quite expensive due to their construction. So we thought: "Let's put out a cheaper model under "Roger"!" No Bender, no Kapo. There was an interesting model called "Flyte" from the English company Burns. I converted it into the Roger "Rocket". But "Roger" was a brand with the intention to offer replicas like Strats, Teles, Thinlines, etc. The quintessence of all this, however, was that we wanted to concentrate on the largest possible production at Duesenberg, so that all these ideas ended up in the garage for unrealized inventions.

In that troubled year I had met a well-off Spanish woman who owned a country house near Santander (the most bourgeois area of Spain). Her bed had the grandiose dimensions of 1.80 m width, which had brought us all kinds of uninhibited pleasures. My Memphis bed in Madrid with its 1.60m was no longer wide enough for me. In addition, these four posts with the rubber bracing were visually very beautiful. But do you want to catapult yourself into your bed with a pike jump every time? So as a guitar designer I rose above the Memphis design and came up with a more practical solution: mattress width 1.80m and only two posts with gooseneck lamps at the head end. Additionally a frontal bed entrance element made of foam covered with black imitation leather. 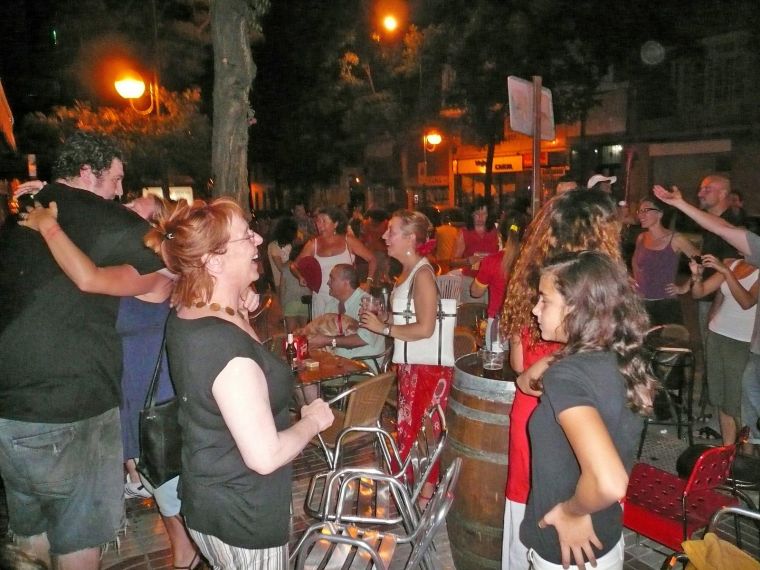