The birth of göldo music GmbH

göldo was a sole proprietorship until the end of 2004. Forced by our success and the constantly increasing sales thanks to Ingo's brilliant activity, I converted the company into a limited liability company with him and gave him a share in it, so that we now became two managing partners. 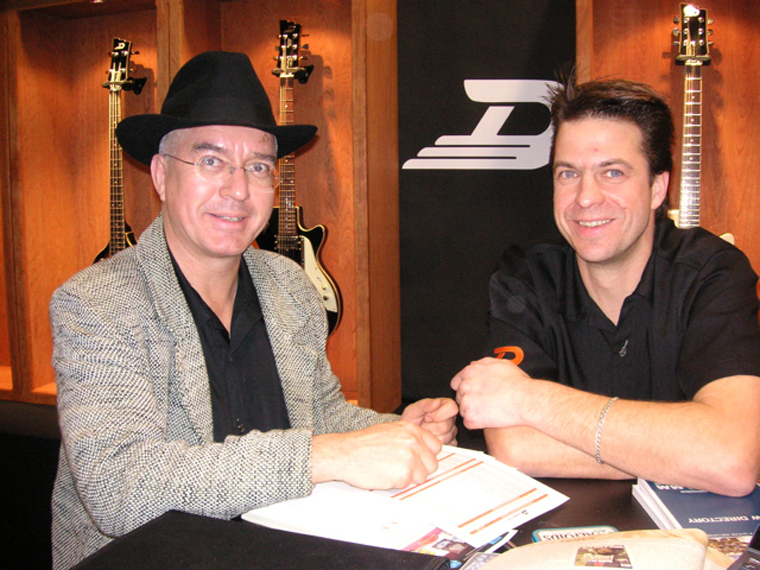 Ingo and me, back on the plane to Los Angeles. This time a representative booth in a well visited exhibition hall was waiting for us. 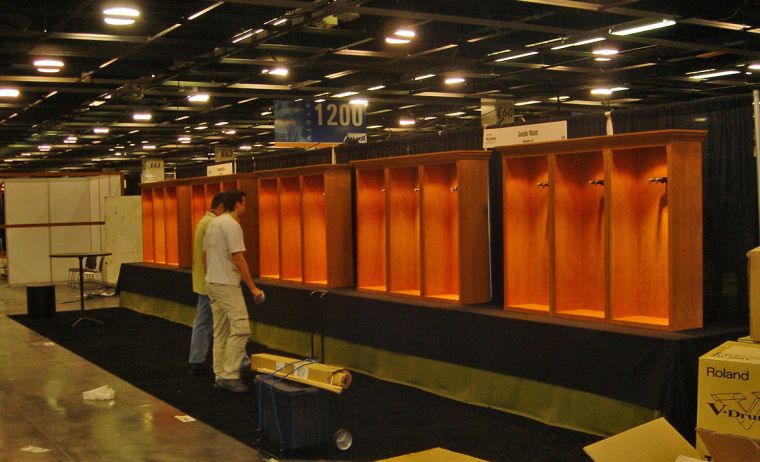 Nathan had a carpenter make five very decorative show cases from walnut for three guitars each.  With these, our 15 guitars were well positioned, and Nathan received more and more orders, especially from boutique stores.  In addition, he had hired some really nice young guitarists from his circle of acquaintances as helpers.  So Nathan and his crew took care of the American market and we took care of our distributors, who all came to visit us.

First NAMM-concert at the „HEROES“:

On Friday, the second day, Nathan guided us to "HEROES". This is a pub in Fullerton with a hundred thousand lights, where they offer about 100 different beers from all over the world on tap. As an appetizer there are mountains of bags of peanuts on the tables, whose shells are thrown on the floor after being shelled under the table. And then huge burgers with so-called "Curly Fries", i.e. 5mm thick, spirally cut potatoes that really suck in the frying fat. Absolute calorie bombs!

And superb: Nathan had organized a band from Fullerton for this evening, who played the finest blues on Duesenberg instruments. And I was also allowed to perform a few songs.

In California most people go home before 11 pm, so we also went back to the Alamo Inn on Katella Avenue. 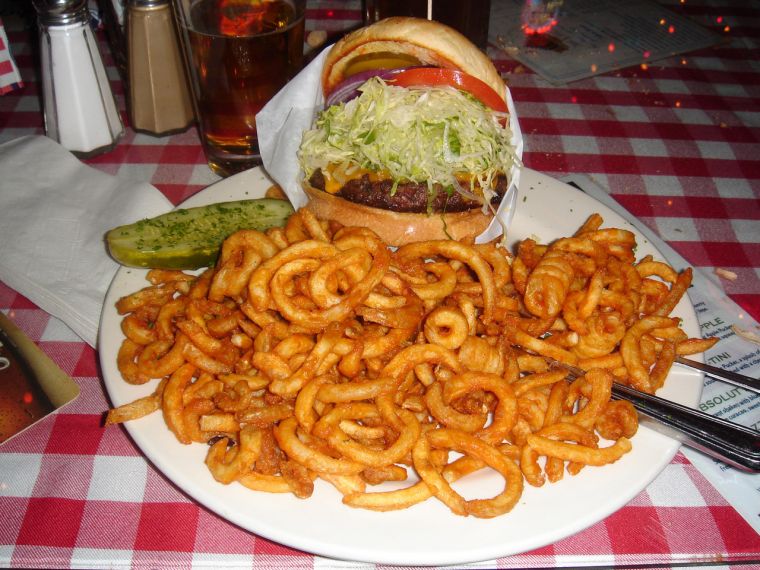 For April we followed Nathan's lead and also had showcases made with walnut veneer, but able to be completely disassembled and one for each guitar. We did without these squiggly superstructures. In addition, a round display stand over six feet high, divided into three segments and made of walnut, which could also hold lots of guitars and basses, all illuminated with LED spotlights. And since this stuff could  all be disassembled, we could transport it to Frankfurt and back in a space-saving way. 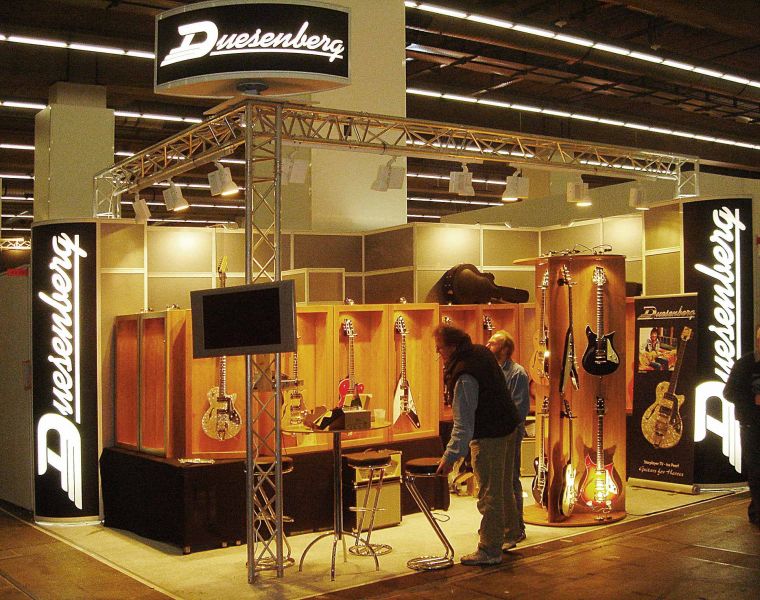 Neither Nathan's nor our design really met my 50's oriented taste standards. I would have preferred something more plush, like velvet and celluloid. But no matter. I had to admit that people in Germany would certainly like high-quality walnut, too. And this show was a complete success. 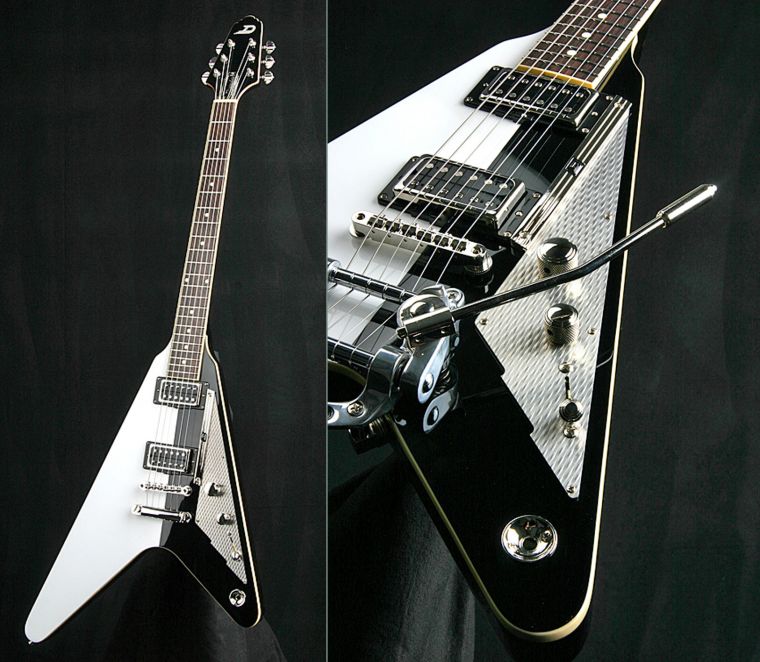 Because of this Gibson annoyance, I simply redesigned the body in less than an hour by shortening the right half a bit. I still find this asymmetrical design much more tasteful than the "original". 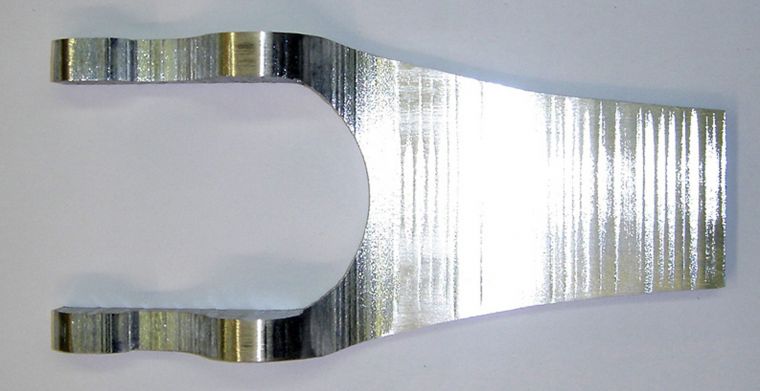 Good tremolos of this type should be precise and light. That is why they are made of aluminum in a die-cast mold, whose life span is naturally limited. Ours had cracks and was unfortunately no longer repairable. A new mold costs a fortune, and I thought, if you do something like that, let's make a nice new design! So first of all I made a design on the "drawing board". But you have to have such things "materially" in your hand.

So I bought some kilos of 25mm thick aluminum and sawed out the outer form on the band saw. (With a fresh saw blade this is easier than you might think.) Then I marked the bevels for the shaft holder (ball string-holder shaft and low pressure roller) on the side (see photos). Finally all kinds of grinding and drilling work finished it off. I gave all the measurements to a technical draftsman, who created a 3D model by computer. And on the basis of this the mold was made. 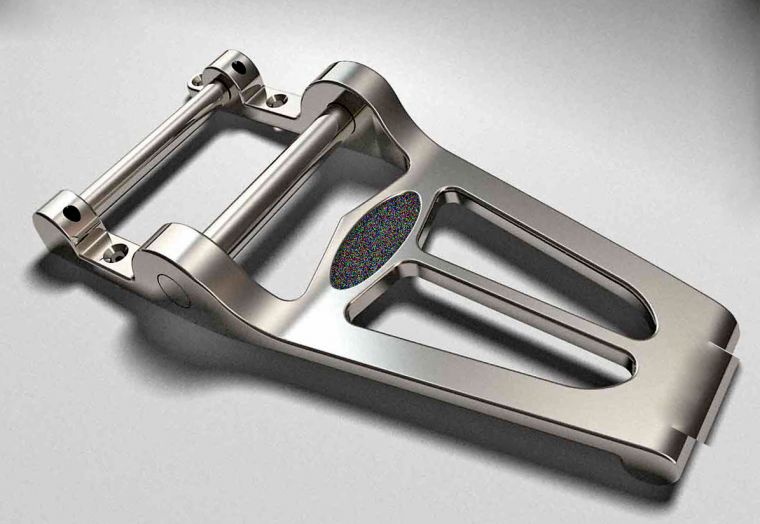 Here is another previously discarded design - but not bad either! 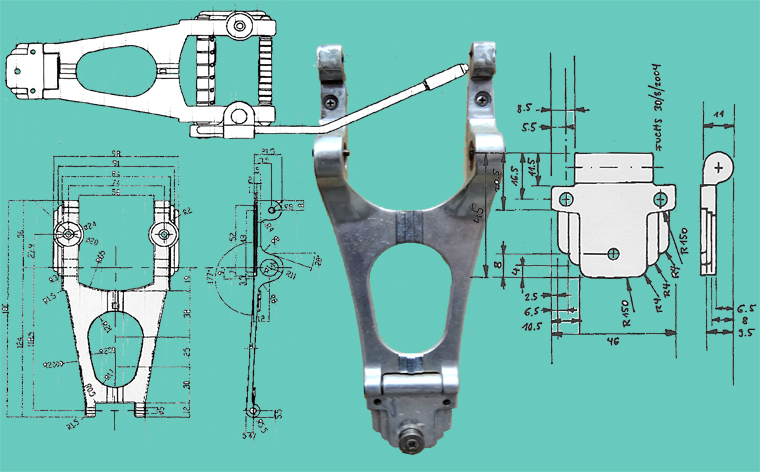 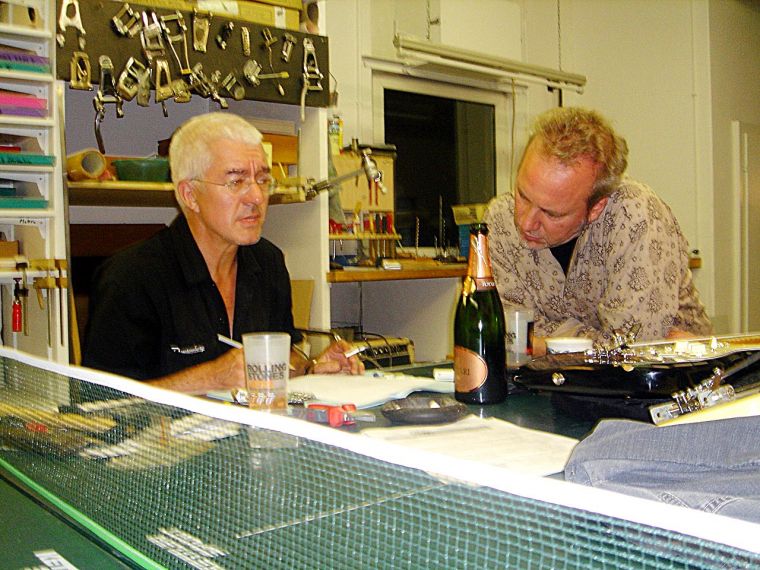 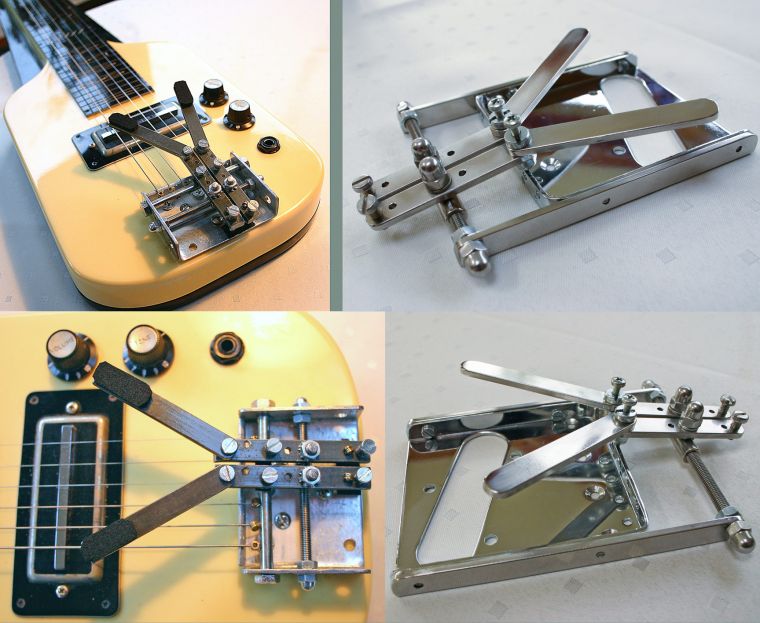 Martin had the idea for the "Multi-Bender". A hand lever mechanism to create pedal-steel-like effects on an electric guitar, but without pedals. He had already cobbled together a respectable functional model from DIY store parts - the so-called "OBI-Bender"."(For Latinos and Englishmen: OBI is a German DIY store chain). We then put this into production as a quasi finished product - not an easy project, because this mechanism should not only work, but should also be suitable for certain guitar types like Strat and Tele.  So we got together and worked on it until finally everything was ready. As with all products of this kind, I first sawed out the lever parts from aluminum or brass on the band saw and then provided them with the necessary drill holes, cut threads, ground and polished them, an eternal "once again" race to perfection.

In the end, it has become a fine mechanical wonder. "Direct Replacement" for every Strat. The spline could hold up to five levers (which of course nobody needs!). With an additional spring under the lever you could even lower the sound in an adjustable way. The Bender even had a chrome-plated lug screwed underneath from the beginning to cover the tremolo milling of the Strat. We had thought of everything, and with the help of a special pickup surround you could also mount it on a Tele.

That was a lot of work, although we had no idea what incredible quantities we would sell, especially to the American market.

A lot of stuff on the ping-pong table ... 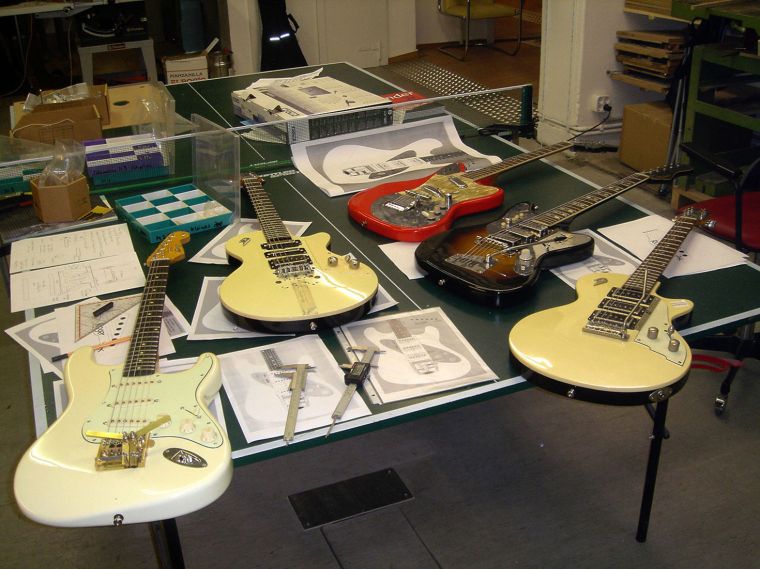 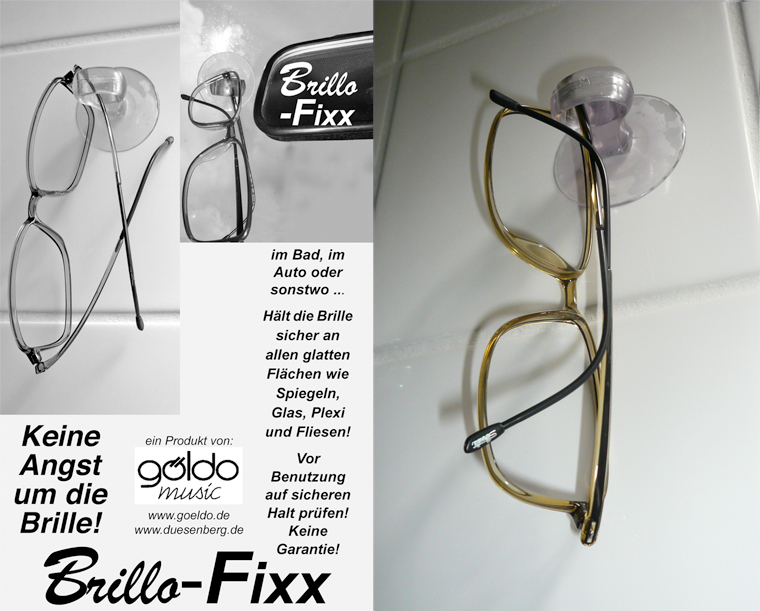 As a wearer of glasses you are always worried about your glasses. In the bathroom they could fall off, get scratched elsewhere, in the car they could slip into inaccessible places. Whatever, whatever, every eyeglass wearer simply has a good feeling when they know that their beloved visual aid is safe and within easy reach.
So I thought of a suction cup with an eyelet-shaped front part in which you could easily hang up one of the two temples of your glasses - attached to a mirror, tiles or other smooth surfaces.
This would be a great item for supermarkets or drugstores, best in a set of two pieces of a display package. Of course, it had to be inexpensive to produce and of course it had to be made of silicone, because the suction effect holds perfectly on smooth surfaces. 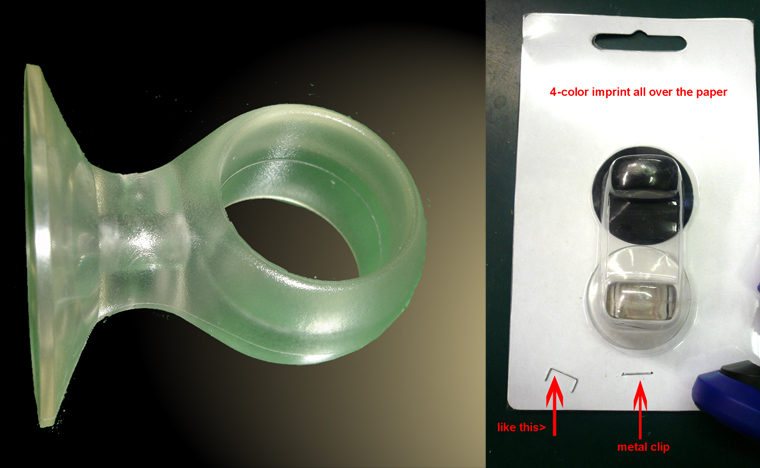 Where can you get something like that done? In China of course! So I googled and soon found a manufacturer. All kinds of email traffic and finally a great price.
So I ordered 5,000 double sets of teats, one transparent and one black one per package.

After several months the big pallet arrived. Of course, I immediately tore open a box of them and had a nasty surprise: All suction cups were made of PVC instead of silicone. The damn Chinese! I immediately pressed some of them against mirrors and windows etc. They held at first, but the next day some fell off, shit! The holding strength could be improved with some cream or soap, but no way to sell these things to supermarkets etc. Imagine a customer's glasses falling off while using the cups.
To cut a long story short: I kept the things and put them as a small gifts in the deliveries to our customers. Never again China! Meiomei, I think there are still about 5000 pieces in our cold storage!

here my office landscape including a grouchy Duesenberg van ...