It's off to a good start!

Apart from those up there: What times are these anyway? For two years no more journey, at least not abroad, except 2021 two annoying short trips from Madrid to Hanover for vaccinations, whereby I fell over on the occasion of the second vaccination in July four hours afterwards in the company, bumms, light off for short three seconds! That's how a nice death could be! The paramedics' ECG reported a double beat after every 20 heartbeats, off to the medical school. There you lie wired on a stretcher and hear this ECG ticking from the background, and after a good 40 minutes it was already over with the double beats. So I yelled out into the hallway, "I want to get out of here!" After signing a paper guaranteeing my sole responsibility, they reluctantly let me go. Cab back to the company, into our new company electric Renault and off to my quarters. Such an electric car is quite something. Incredible acceleration! You can easily outrun any Porsche. At least at the traffic lights ...

Besides that, it's time for some more craziness:

Possibly one of the best guitars in the world! 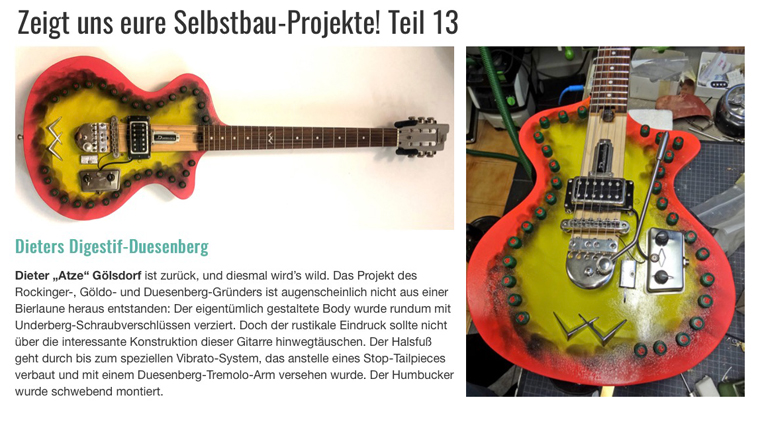 Business-wise, 2020 was our best year yet. Sure, all the musicians sat rather idly at home and ordered stuff from their stores that they might not have otherwise treated themselves to: tons of lapsteels we sold and everything else too. And 2021 was even better for us, hard to believe!
In July 2021 I had given up my Madrid workshop and had most of it transported to Cadiz. For the three months I stay in Madrid, it was just too much money for rent, electricity, insurance etc.. For Cádiz is better left in July and August, because too much hustle and bustle and tourism, and enjoy the soothing quiet in Madrid, where pretty much all the residents are gone, namely on Spain's beaches. And late December to late January Madrid also has its good side and you can do all sorts of things.

Only by the now missing workshop I felt a little uprooted. It bugs me when I have a guitar-related idea and can't implement it right away. What remained for me was to design all kinds of parts (especially tremolo components and guitar designs) on the computer and to order metal samples from several CNC companies in order to be able to put them through their paces in my Cadiz workshop in February. That can be exciting, too, and besides, I've started reading all kinds of books again. How nice also the new book of Fargo-Peter about the Krautrock scene in Germany, including his successes with Fargo and Victory together with Vinnie Moore. Absolutely worth reading!

Next in design: Could be the best guitar in the world! What do you think? 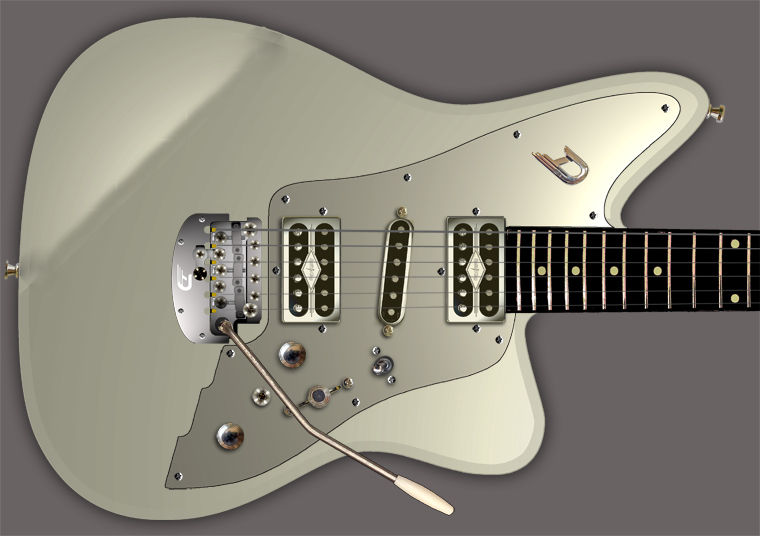 My "invention" of the trans-tremolo, in which the intervals of the six strings are preserved during tremolo playing, unfortunately had to go to the "garage for discarded inventions" again - see Daniel Düsentrieb. It worked, but was just too sluggish due to the increased deflection force of the strings, which are too high above the center of the axis of our tremolo. But I'm not giving up!

Instead, I'm currently working on a new "Strat" tremolo, which works much smoother and more effectively and still allows the most violent up-and-down bends. It will have the latest features like top-loading  strings, a length-adjustable lever cap, two conical brass bolts instead of a conventional tremolo block and possibly a zero-stopper, which allows you to tune the low E-string down one note without putting the other strings out of tune. You can be curious!

We had already watched The Walking Dead late into the night last year. Now we're on Fear The Walking Dead, because it's on right now from the first episode at our Spanish provider. There they talk about "please go back to normal life!". But what is this "normal life" anyway?

When I was 16, in 1968 or so, we had a volleyball group at school and indulged in this sport every Wednesday at 5 pm. My parents already had a TV, which wasn't "normal" back then, and with some of our group we would go to my house afterwards to watch Mini Max, a series featuring agent Maxwell Smart and his colleague "118." That was our ritual - every week, on that exact day and hour! There was no streaming, no recording option, nothing else. If you wanted to watch this show, it was exactly Wednesday at 6:30. And we totally celebrated and enjoyed it. That was "normal life" back then?

And what about today, especially after COVID, after this pandemic broke out in early 2020? That beloved "normal life," which always meant something positive to many after World War II, has not returned to this day. And Fear The Walking Dead, that series where normal life stopped, they were already shooting from 2015, before all this. Was that a vision?

These thoughts came to me when we recently visited my favorite restaurant "El Faro" again here in Cadiz. The restaurant is rather insignificant, but it has a bar where the pulsating life went off before. Always packed. Drinks and tapas were put on the counter by the bartenders and passed on through the hustle and bustle of diners to the orderers, communication and cheerfulness among all, a touch of bourgeois rock'n'roll, a cool bar. But since the beginning of the pandemic, it was forbidden to take anything at the bar at all. High bar tables were placed against the window wall, and an area behind the bar, which must have previously been restaurant space, was converted into a bar area, with tables and chairs. Since then, instead of 50 guests, the actual bar area has been occupied by no more than twelve people. And a lot of people (including many boring tourists who wouldn't have even found a seat here before) sit in the back of this new area, apparently more of a reservation. No more communication with the "normal" people and the still mask-wearing waiters, who now inevitably have to move more elsewhere.

This is exactly the loss that we unfortunately have to register today, the loss of cheerful communication! And most of them are probably not even aware of it. 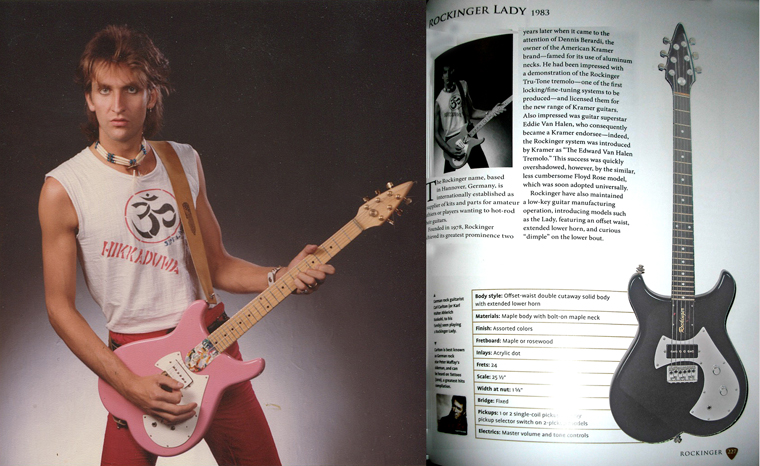 My very first guitar design from 1978, meiomei! Somehow I still like this 1-pickup "Lady" and I'm thinking about reissuing it in a small edition. After all, my old friend Carl Carlton was the first to play it! And it has appeared in some official guitar books.
"Lady's first" ... 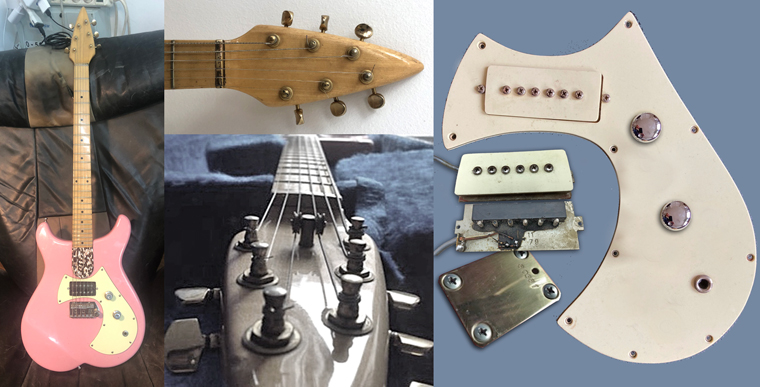 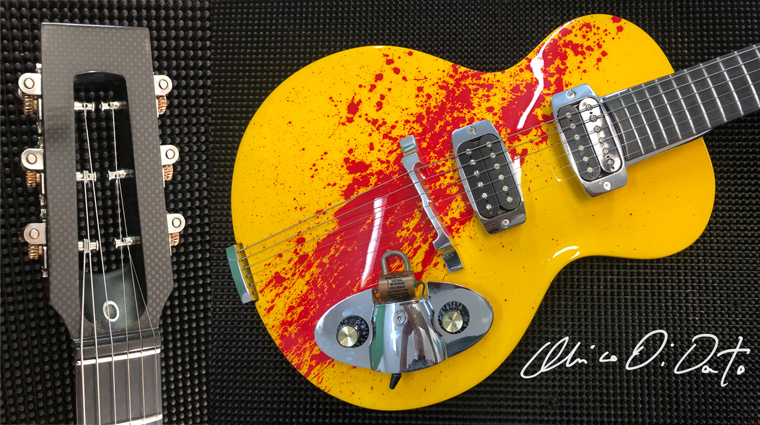 Our "Julia" model, named after my daughter, proved to be too costly to manufacture and assemble. So we looked for new ways. Here is a preliminary draft: 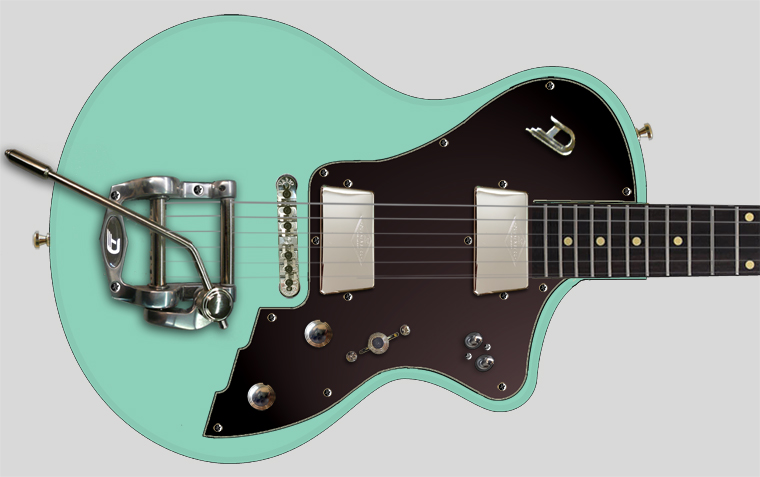 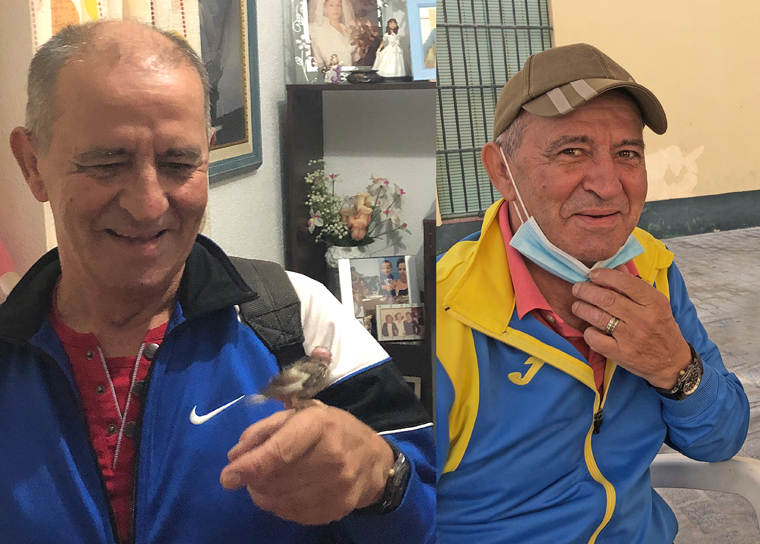 Actually, it's none of your business, but José, the best friend we had in Cádiz, suddenly passed away at the age of 67. In his honor and so that something of him remains, you can see two photos of him here. José was kind-hearted and helped us with many things for more than three years. And we had wonderful jokes and meals together.
Once he found a little sparrow that had fallen out of its nest. He took it home and lovingly nursed it back to health. This totally tame sparrow still flutters around the apartment without feathers on his head and chest. José's grieving widow now has to take care of him and clean up the constant bird poop crumbs. But this bird story shows so beautifully the kindness and warm-heartedness of my deceased friend. 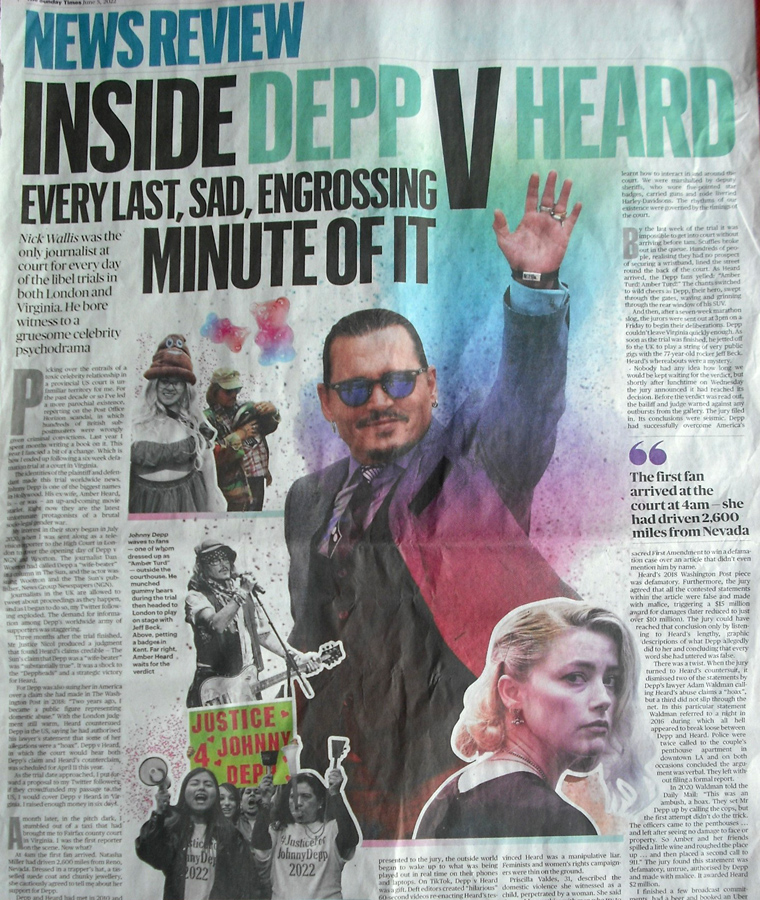 With Jeff Beck - how great does this guy sing!


A real spectacle. A myriad of groups present here in a competition in the Theatro Falla (just around the corner from us) and also on the streets their repertoire, which they have rehearsed for months. An incredible musicality in this city. They sing at least 4 voices and always fully to the point. The performances are practical all with political content, Cadiz is full of people from all over the world and it goes off here!

And how beautiful! Made the storage room of my workshop a bit fit - 4 big white cabinets, in which all kinds of things are now hidden!

And my tremolo and hardware "museum" shines in mint green!

High summer in Spain. Raimundo Amador on the beach of Palmar!