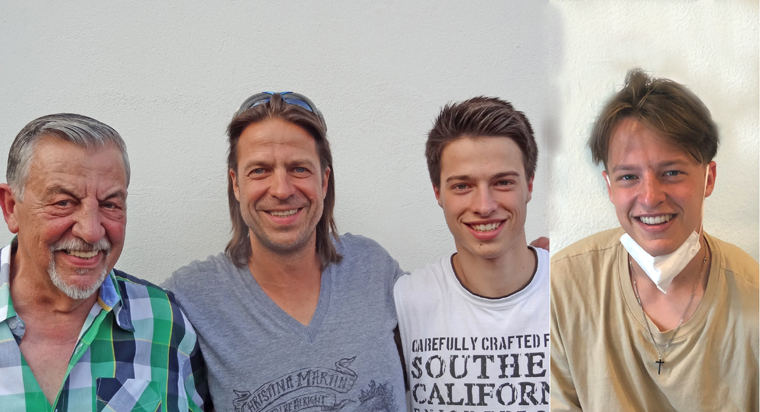 Here you can see genetics at work with three generations. On the left is Ingo's father Klaus Renner, Ingo of course in the middle, and on the right his son Luca, who has also been with us since 2019. By the way, much of our success is due to Ingo, who brought Duesenberg so far forward both in a commercial sense and with a lot of creativity. And he has also given me the privilege of being able to help steer the business from Spain. 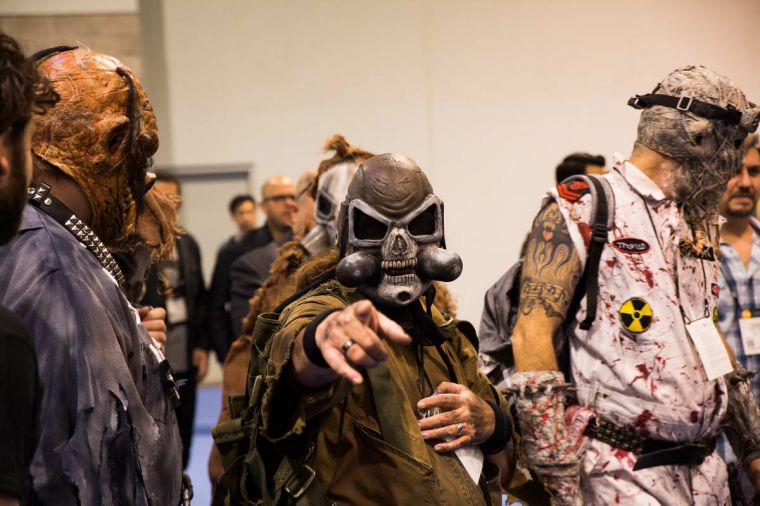 Once again there was a lot going on at NAMM. And neither Bruce Sklar nor Joe Walsh shied away from appearing at this show. 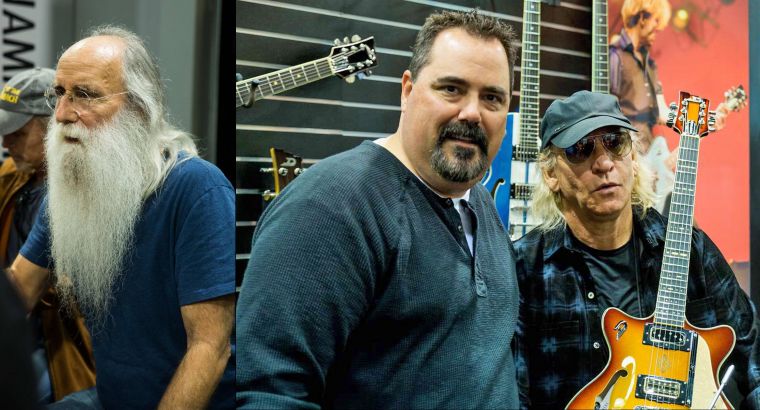 Greg Leisz, lapsteel and dobro specialist who has played with almost all American music greats. On the right, a Gittler guitar, totally awesome! That's the kind of innovation I just dig. 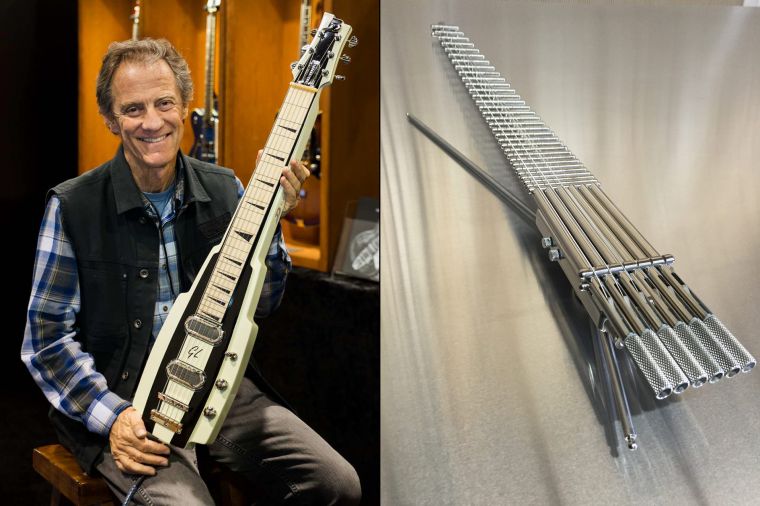 Arriving at the college backstage area, Martin immediately welcomed me with the excited words, "You won't believe who's here as special guest today!" "Who is it?" "Robbie Krieger!" A total surprise for me, of course. The real Doors guitarist. We said hello right away and I told him about my "Los Dooros." While doing so, I gave him my business card, which also had our logo on it. "Hopefully you won't get legal problems with that," was his spontaneous reply. That's when this man lost it with me, although we continued to speak for quite a while. He told me that his son was now "doing the Jim Morrison," also dressed in black leather.

It may sound heretical, but here I'm sorry to say that for me, after Jim's death, the Doors were no longer the Doors. What this remaining group produced after that was all low level and without any of Jim's charisma. The music they now perform as "The Doors" is for me unfortunately little more than a rather embarrassing cover band.

The Doors had many strong compositions that can't be topped. For me, it's pointless and unattractive to just replay them 1:1. So I rearranged the songs with "Los Dooros" and changed the instrumentation to not have a keyboard. Here is the inside of the Dooros booklet ("My conversation with Jim"): 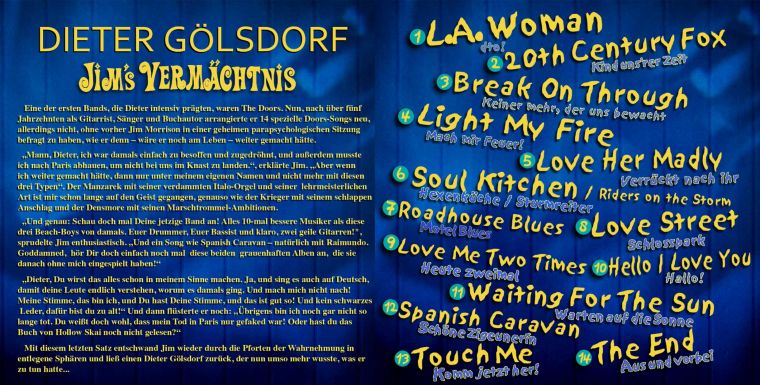 One of the bands that most influenced Dieter Gölsdorf musically as a teenager was The Doors, the psychedelic rock band formed around singer Jim Morrison. And now, after more than five decades as a guitarist, singer, songwriter and book author, Dieter has rearranged 14 special versions of Doors songs and two other psychedelic tunes - but not without first asking Jim in a secret parapsychological session how he - if he were still alive—would have continued the band. Jim responded enthusiastically, "First, I would have gotten a bass player. Then I would have put Manzarek´s damned Farfisa organ on sale on Ebay for a dollar, and made him play an electric guitar—a Duesenberg Starplayer, by the way, if it had already existed.” Jim continued angrily, “And never again those horrible orchestral arrangements that were pushed on us by the record industry! And you, Dieter, are already doing all this in my interest. But don't imitate me! No black leather pants! You're too old for that! And by the way, I haven´t been dead for as long as people think. Didn´t you know my death in Paris was faked? Fuck, I was just too drunk and shitfaced to make the band anything better!” With this last sentence Jim disappeared again through the gates of perception into remote spheres and left behind a Dieter who knew now more than ever what he had to do... 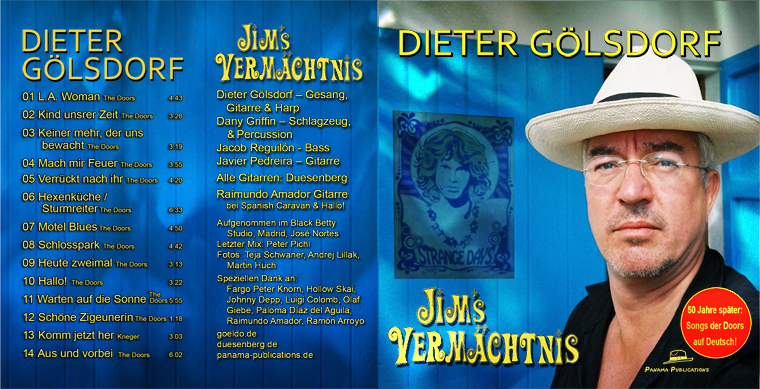 Before and after the music again there were many good conversations. Oh, and how my Paloma was happy when Martin Huch took this wonderful photo of her and Johnny Depp! 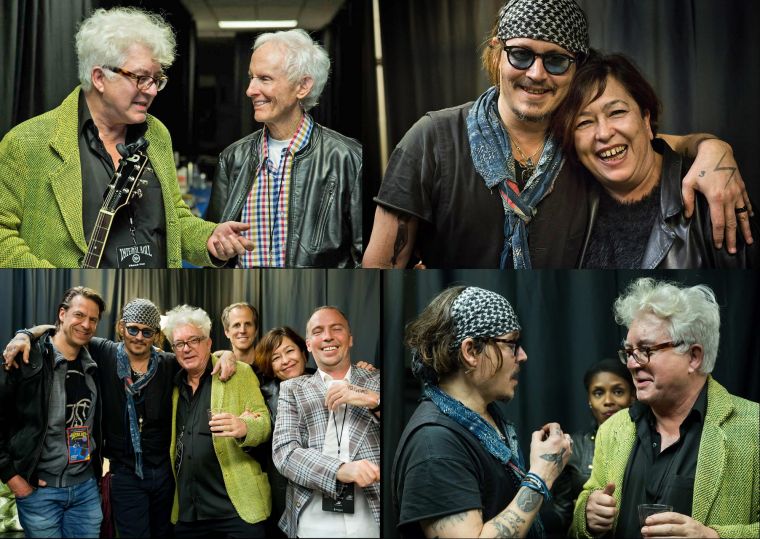 The concert was great again, of course, and Robbie played on one of Johnnie's Duesenbergs, after all. By the way, we all came to the conclusion that Alice Cooper probably doesn't need to put make-up on anymore. And if someone would have come into question as a successor for Jim Morrison, it would have been Alice Cooper! He brought forth the Doors songs authentically in his own way and that was a pleasure to hear. 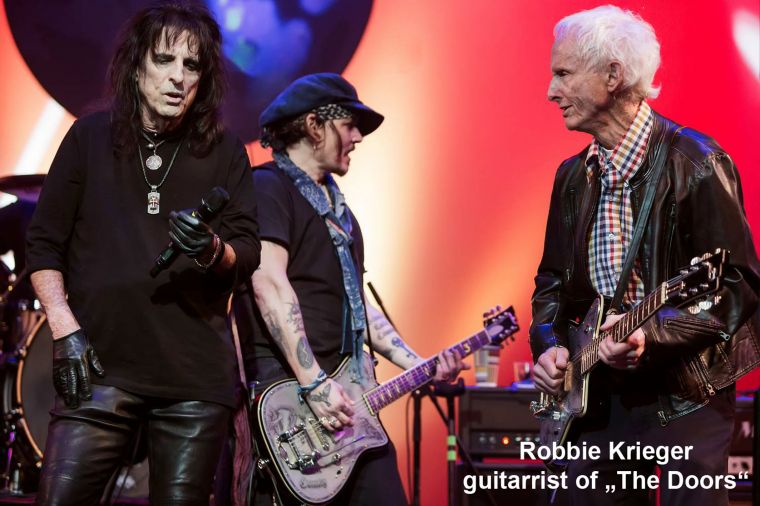 The Hollywood Vampires in Germany

Big open-air festival near Cologne. Ingo, Henning Vahlbruch and Chris Distin were there. It must have been great and Johnny talked extensively with our guys. 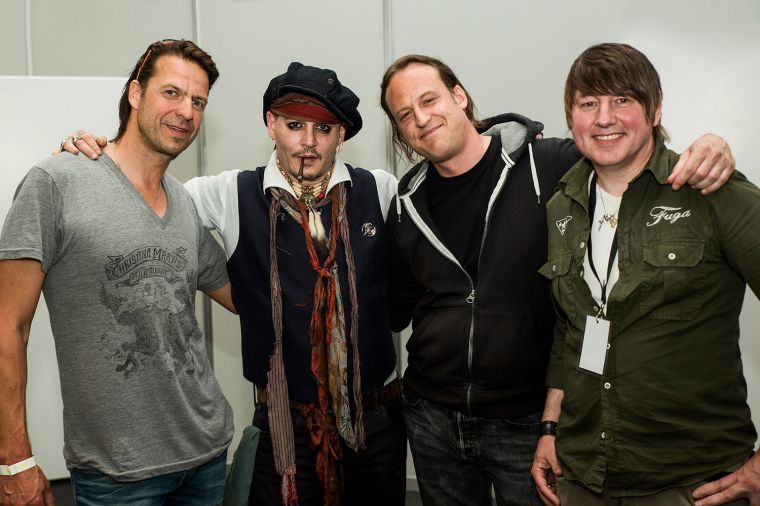 A 49er guitar signed by Udo Lindenberg and with a skillful drawing. Udo can do it all! 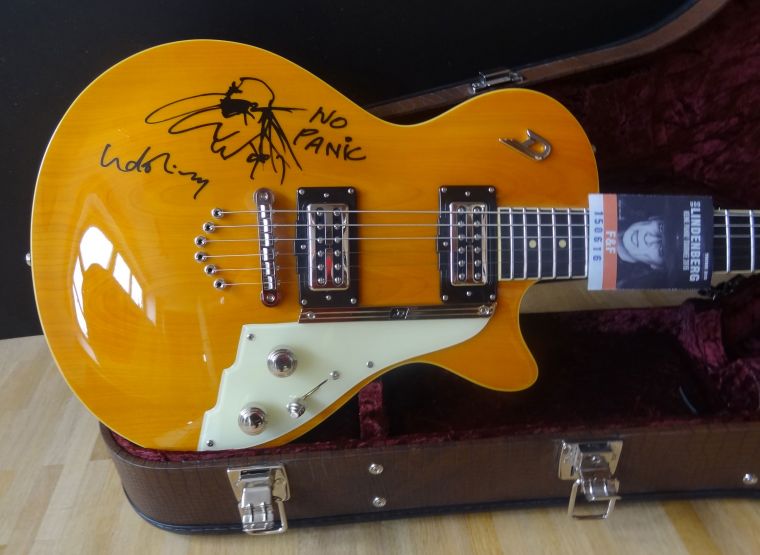 Oh boy, Gabriel had an issue Friday afternoon in the paint booth with one water tap not properly turned off. Something must have let loose, which led to a total flooding of our company over the weekend. Everything was under water, a huge scooping and mopping up, a lost day in guitar making. Fortunately, practically everything was on pallets, so the damage was limited.

There have always been these "modular" ideas, e.g. exchangeable bodies, quick change pickups, electronics, etc. But they never fascinated me. But I got the idea from this Wandre design, where everything is mounted on the central aluminum neck with continuation into the body, to tackle something like this with wooden necks and an assortment of various metal parts. A central unit with everything mounted on it, and different body shapes - but not for quick replacement, but simply to suit different tastes. 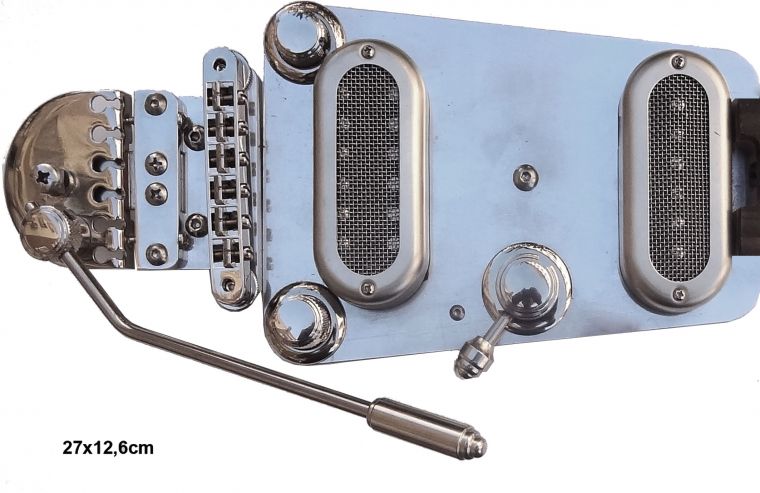 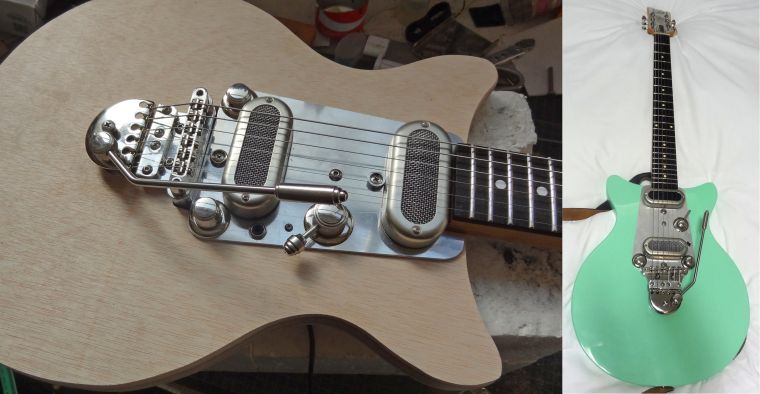 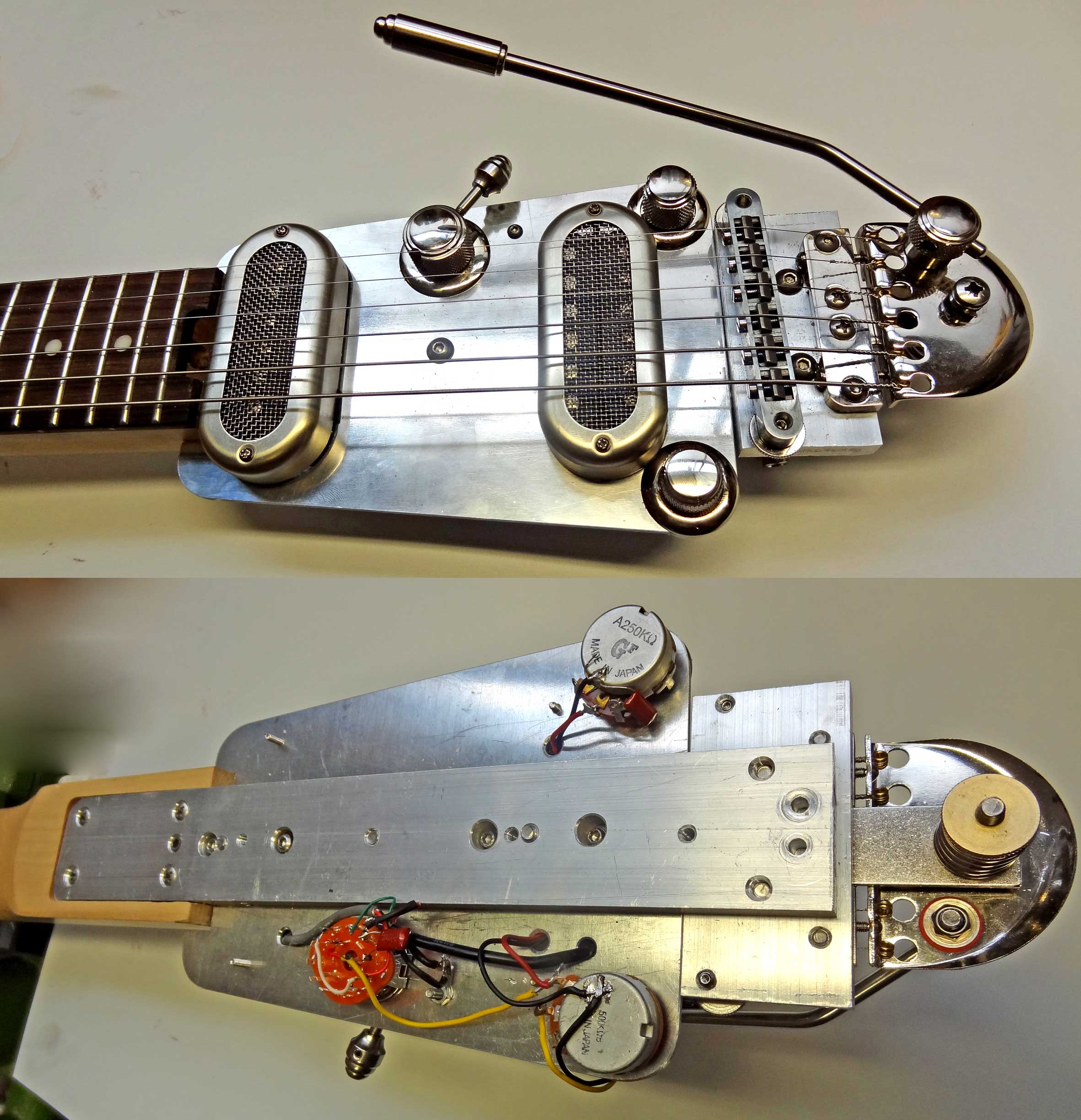 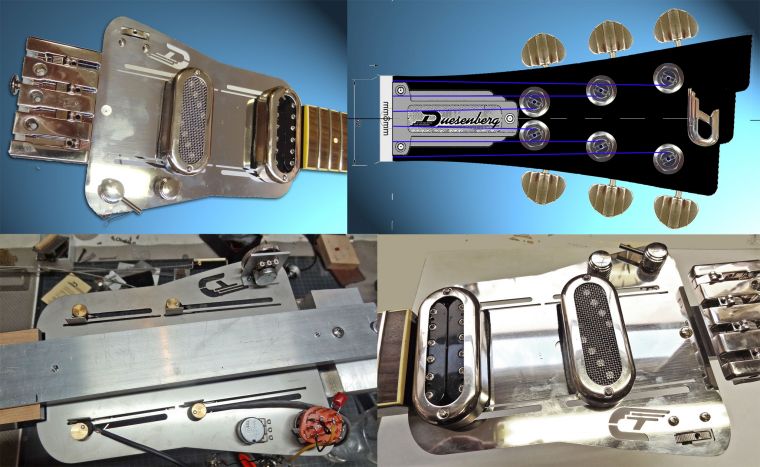 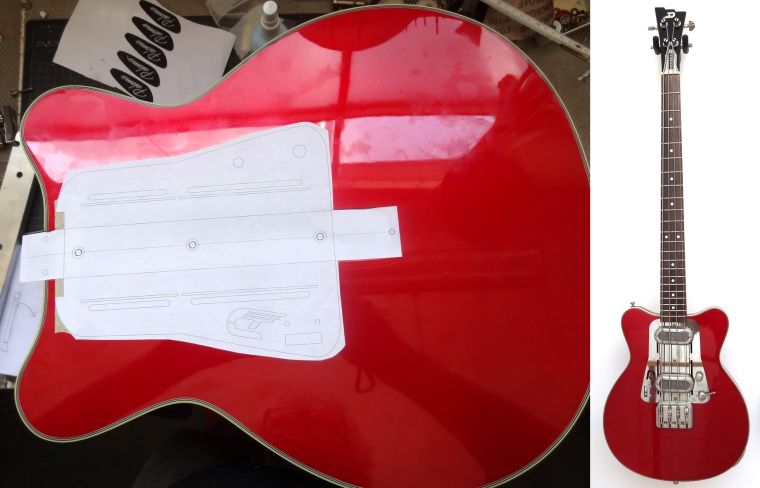 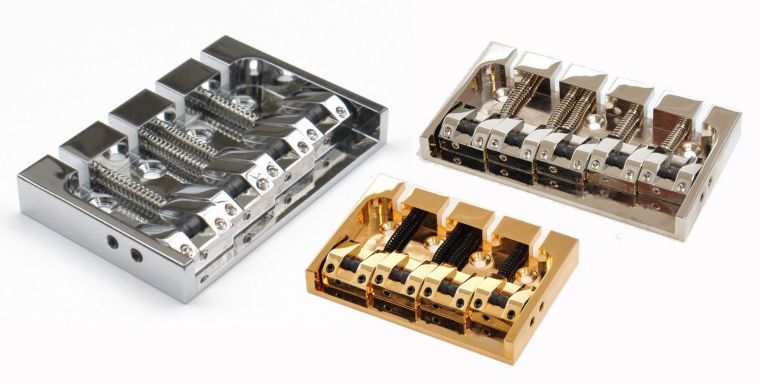 Our 4D-Bass-Bridge is back again! The base plate is milled from solid brass. The strings rest on steel rollers that can be moved sideways to adjust the string spacing. After all adjustments are made, the tabs are fixed in place using the grub screws on the side. This guarantees perfect vibration transmission and thus the optimum as far as sound and sustain are concerned.

With the standard stop tailpiece, the entire string tension is applied to the tiny loop that runs around the ball end. The two "legs" of the loop go into the wrapper at an angle at two bend points to each other. Due to these bending points, a fast breaking of the strings is preprogrammed, especially with unwound strings. Here is a first, handmade version: 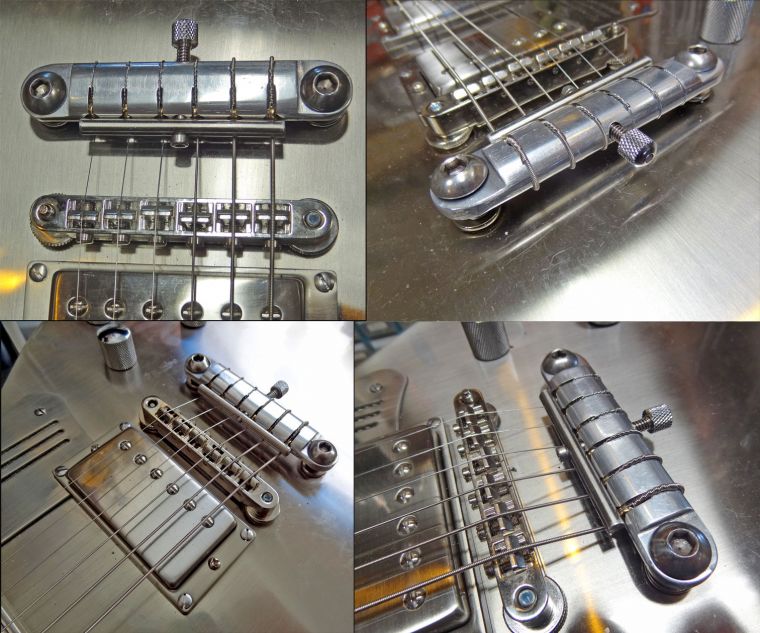 With the wrapper tailpiece, the strings are hooked with the ballends at the front and pulled back around the tailpiece, so that they exit at the bottom of the front towards the bridge. This distributes the string tension over a surface area of a few inches, so the stress on the bend point at the ballend is much less. That's why you play much longer and stress-free using our wrapper tailpiece, because practically no strings break here. Here is a CNC-milled part:

In addition, it can be adjusted lower, which allows you to increase the angle of pressure of the strings on the bridge as desired, which leads to an increase in sustain and attack on many guitars. For stress-free stringing, the wrapper has this spring-loaded bracket that holds each string end in its mounting hole.

In the meantime we are also well positioned in Spain. Almost all top bands are playing our instruments. Here on the left is Boli, bass player from Fito y Fitipaldis, the most famous Spanish rock band. And our "Authorized Dealer" in Madrid, "Headbanger Guitars", carries a good Duesenberg range.
.

Los Dooros got a new drummer. Dani Griffin, a guy from Chicago, who has been living in Madrid for about 30 years and is also the drummer of Fito y Fitipaldis. You can hardly get a better one! And very important: Every gig of my band is of course also the best opportunity for me to check the usability of new designs and technical developments! 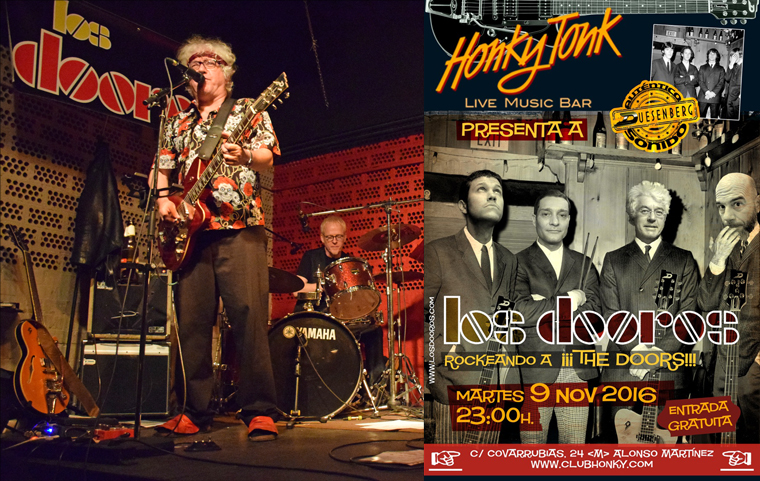 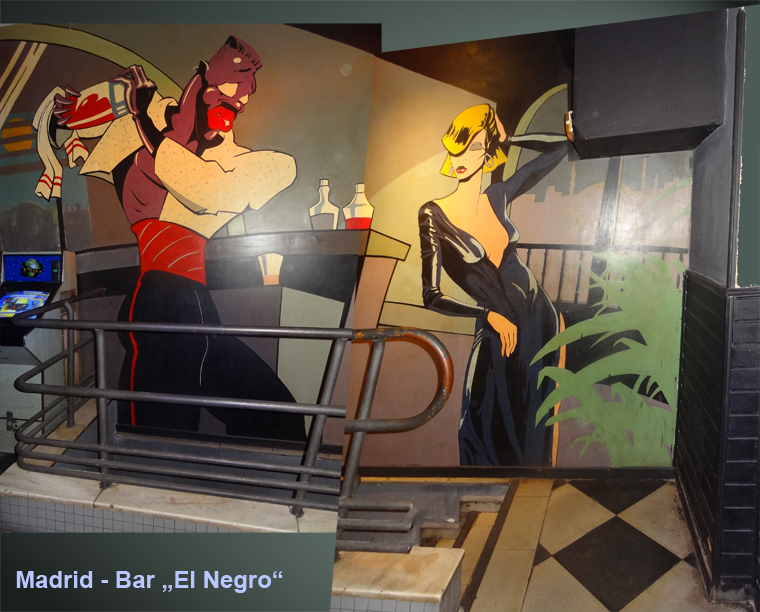