Sometimes less is more. Two short term acquaintances who had nothing to do with guitars, for example a hummingbird on a tree in front of Mimi's cafe and a Mexican hotel employee named Edith who was happy to speak Spanish with a guest. It should be noted that this woman has been living in Anaheim for over 20 years without official papers and has not been to Mexico once since then. That's how the Americans are! 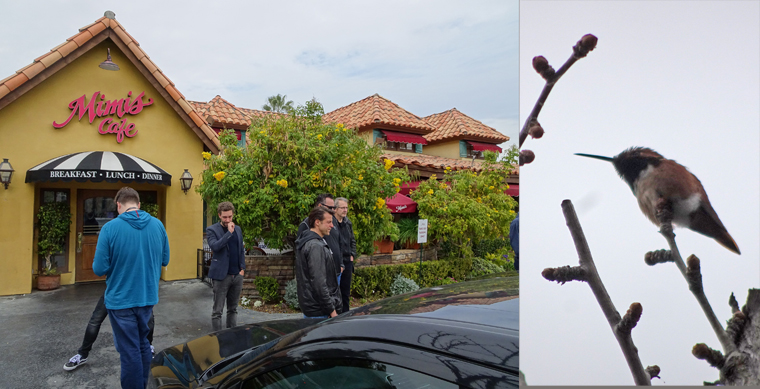 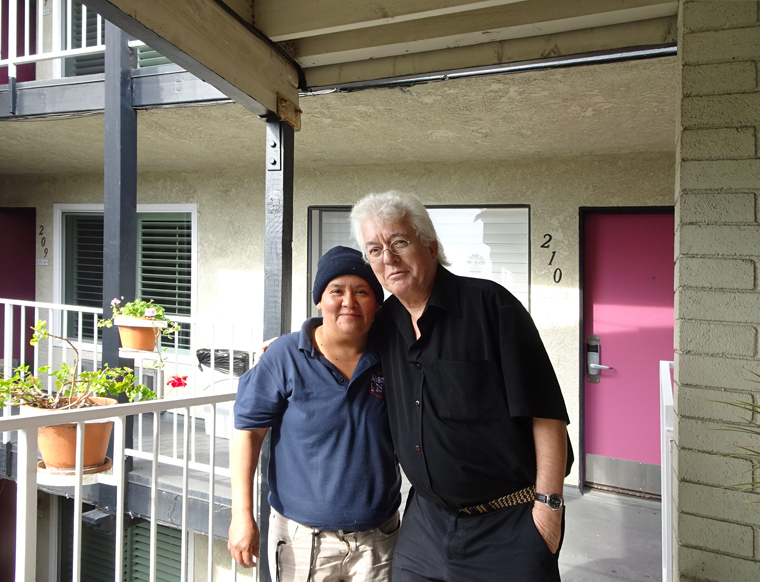 Still a problem with the sciatic nerve in my right leg. I finally decided to have surgery and went back to the hospital at the end of January. This cost my health insurance company a fortune. The day after the procedure I could already get up and felt like a newborn. No more pain. My room neighbor, who had the same operation, gave me a few cigarettes and we smoked with pleasure on the terrace, although of course it was forbidden.

Unfortunately I was rejoicing too early. After a few days the pain started to return. An x ray showed that there was a heavy bruise, which allegedly pressed on the nerve. 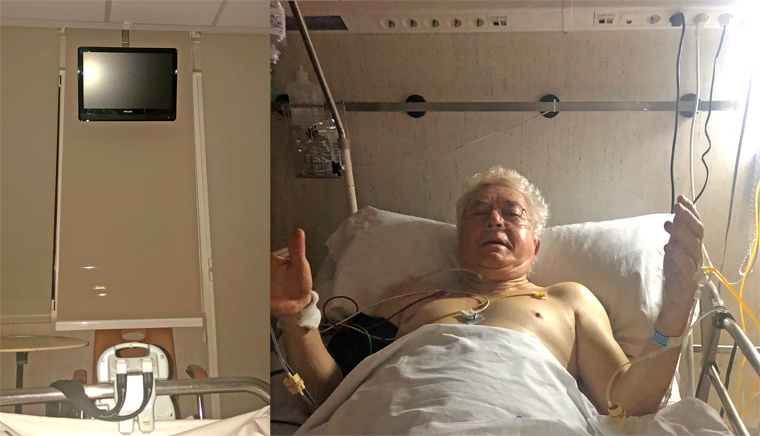 I was also furious about how the nursing staff had treated me after the operation and I couldn't avoid sending an angry message to the clinic management:

My name is Dieter Wilhelm Gölsdorf and I was operated on the intervertebral disc (sciatic nerve) last week.  I use prescription glasses and I was not allowed to take them, presumably understandable from a medical point of view, into the operating room. When I awoke from the anesthesia a few hours later, I asked for my glasses in the UCI room, as I can hardly see anything without them. I was told that only my wife or another family member could get them for me. When I asked what would happen if I had neither wife nor family, I received no answer.  To put it bluntly: without my glasses I can't watch TV, put toothpaste on my toothbrush without spills, use my cell phone, and certainly not read a book - which made me particularly angry. What are these methods? How do you treat your patients? From hearsay, even prisoners in Spain are treated better. And for this insolence, which I would like to casually refer to as deprivation of liberty, I was charged this incredible five-figure sum, including two nights in a private room with instant coffee!  Also annoying: One week before the operation I sent an e-mail to the office of Dr. Sala Walther, which came back with the note "undeliverable - error". Today exactly the same thing happened to me again. How is it possible that no emails can be received in a hospital for more than two weeks? Also a promised callback did not happen.  The only logical conclusion that I can come to in this matter is that the organization of the Hospital Ruber International consists of a gang of useless, shameless, profit-hungry people who should definitely and immediately be replaced by more qualified personnel!

At the beginning of March we drove back down south, where the carnival in Cádiz was already in full swing. In the meantime our house was completely renovated and furnished. So was the kitchen; a good reason to finally go to the market and buy some fantastic seafood and fish.

What’s on offer here is really incredible: mussels, crabs, langostinos, fish of all possible varieties. And as constant companions in the parks these little mini parrots "Cotorras" fly around, see right. Imported from South America and somewhat larger than budgies, they are said to disturb the ecological balance. But they are pretty! 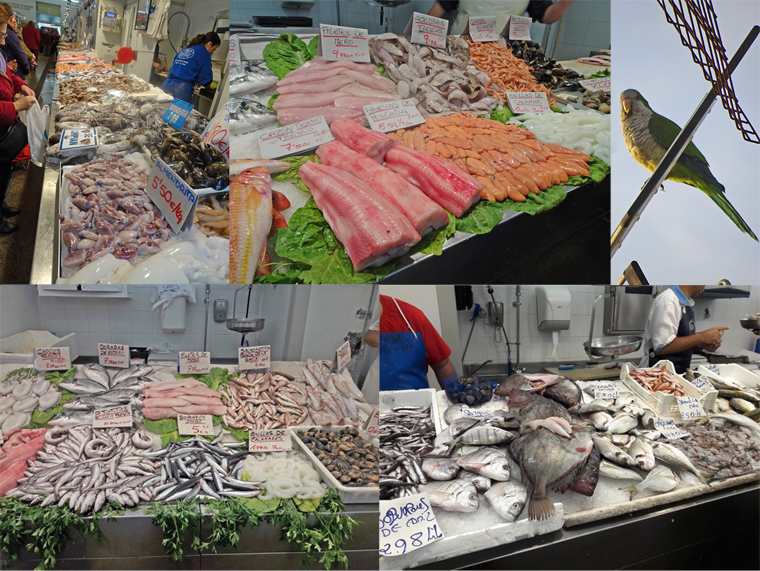 An unbelievable spectacle on all squares, streets and alleys. People everywhere the eye can see. Groups in costume celebrate musical performances with mostly politically relevant content, and they sing absolutely professionally in four part harmony. In addition, there are competitions in various categories, which are held at Teatro Falla - just around the corner from us - until late into the night. Live TV broadcasts throughout Spain are included. On Youtube there are endless videos under "Carnaval de Cádiz"! 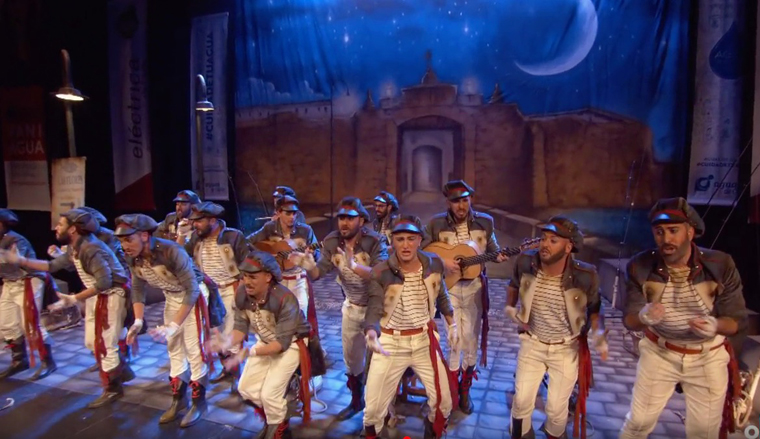 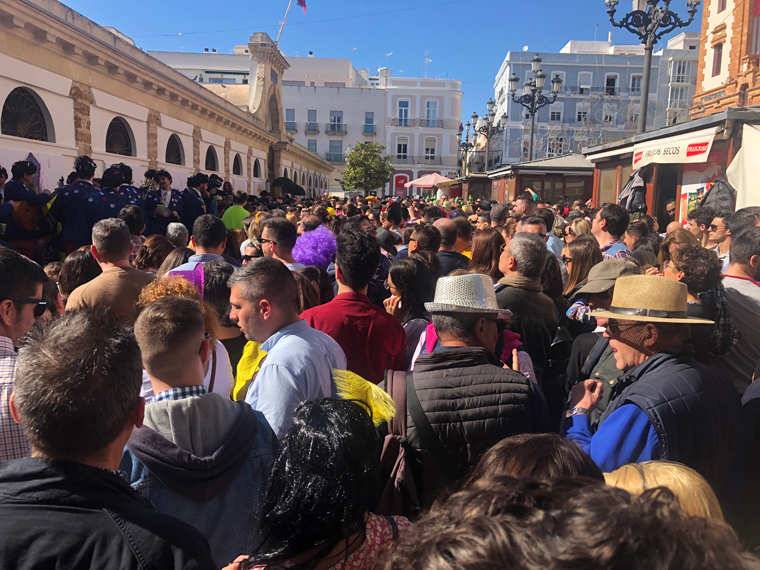 Towards the end of the carnival the first Corona messages came from Italy. And there were a lot of Italian visitors here ...

And shortly after that the virus got me. But I did not notice anything. We had met a nice couple - Robert and Elo - who are also in the music business, promotion, gigs etc. Robert had flown to London shortly after carnival for the mixing session of a Foo Fighters studio recording. There were about 50 people there, and one of them had passed Corona on to Robert. Back in Cadiz he suddenly felt bad. We were together for half the day including dinner, and when they were finally gone, I finished Robert's glass of red wine, delicious Amarone, which I didn't want to pour out. But no symptoms on my part, only Paloma felt a metallic taste in her throat. But that was it.

And then came the lockdown, you were only allowed to leave the house for shopping in the supermarket, of course only with mask and gloves.

Even before the virus and lockdown, Robert and Elo had visited us with their protégé Israel, according to "El País", the new star in the flamenco world. Isra looks more like a metal rocker, and we let him test a Roger Saturn. He was thrilled and now he has this guitar. Let's see what develops out of it!
In Spain, during the first lockdowns, it had become a habit that everyone went to their windows or balconies at 8 pm on the hour to celebrate their solidarity with the doctors and the nursing staff in the overcrowded clinics by tapping on pots etc. We did this, of course, until I had the idea to step out onto the terrace with my acoustic guitar and play one or more Van Morrison songs. There was even applause from the surrounding roofs. See and hear it yourself!

Much home alone time with Corona. Spurred on by Martin Huch and Heinz Rebellius, I devoted myself to a Bender problem in addition to writing this website: A Multi-Bender for the Tele would be a hit! It should be possible to integrate it directly into a Tele bridge without milling and drilling. 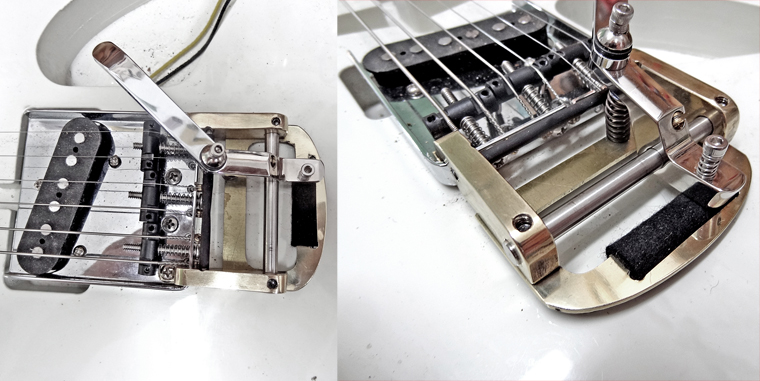 First, I thought about it. The problem was solvable. The first wild prototypes were made. Everything worked, even the "bending up". Soon coming into production.

While experimenting with a hand lever bender I mounted the sitarizer brackets on the tele bridge again.

Unfortunately, this horizontal bender did not make it into production.

But that escalated so far that I installed a hip lever on this part. But it was rejected by Heinz and Huch. Once again into the garage of the discarded inventions ...

But that's not all ... Corona, what time do you give me? What about a Duesenberg Tremola with integrated Bender?

This one will now go into production. Heinz and Huch were totally enthusiastic!

M8 sleeves with spreading function: (Text from our web shop) Even with such a despicable component as impact sleeves, the wheel can be reinvented. Inside the sleeve there is a grub screw which spreads the sleeve apart after installation. This makes it secure in the wood and ensures an optimal transmission of the vibrations. It is best suited for the reassembly of vibrato systems that are fixed in the threaded sleeves of a tailpiece.

The "collar" at the upper edge of the sleeves prevents direct contact of mounted hardware parts with the guitar top and protects the surface from damage. Required hole diameter: 10mm - ideal for a centered 10mm drill! Supplied in pairs.

Hah, this is Spain! Watching and feeling the soccer matches of the league during the pandemic is "quite normal". The Spaniards project pixels onto the stands that look like they are spectators. No idea how they do it. The supposed spectators can also be seen during camera pans. Only in certain sections does this not work. Then you see the empty stands. Chechu once explained to me that this technique was originally developed for porn movies. You could exchange the faces of the actors with other faces. Incredible technique! Imagine a bank robbery, which is recorded by a camera, and then exchange the robber's face for yours. Boom, you are in jail. But let's get back to soccer: As a background noise, there is a constant stream of authentic audience sounds: "Oaah, Uaah". However, it still needs to be tweaked, because when a goal is scored, the most important thing is probably missing, namely the "Goool" roar. But they will get that soon too.

We gave the Palomas these cool colors. But with the completion of the Split-King pickups I wanted to add one more. Working title: Palomita. 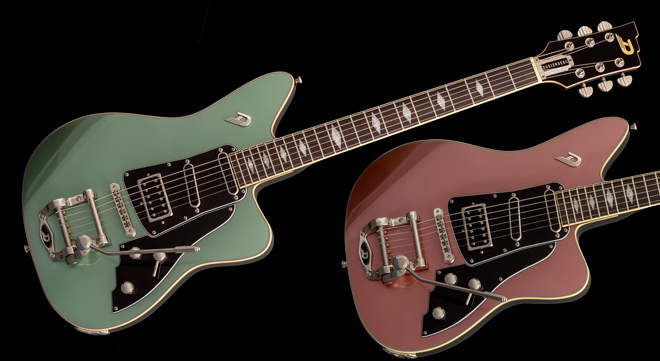 The name "Super Fly" comes to my mind because of the undisturbed neck access all the way up the neck.

Here are some sound samples, but the different switch positions are not really reflected in these internet videos. Anyway, you have a guitar with present humbucker sounds and authentic Fender sounds. And in addition this awesome tremolo!
! 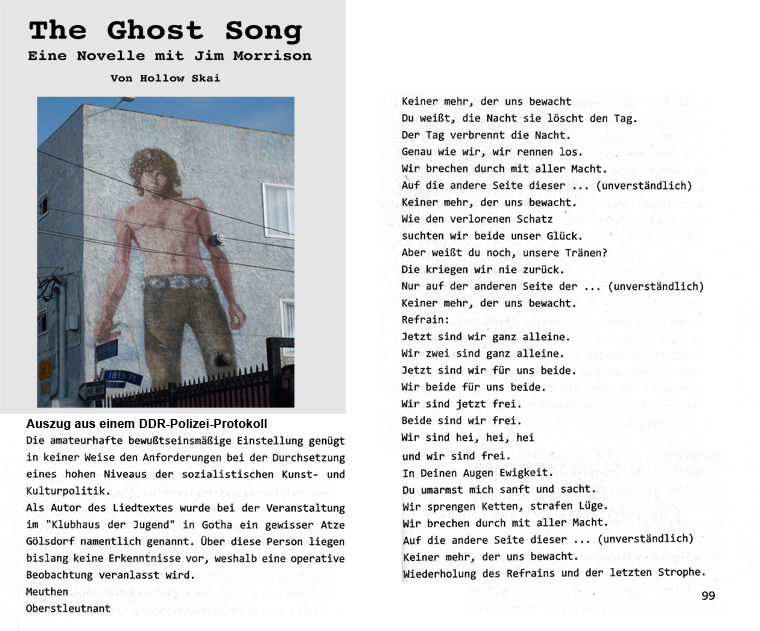 Now that the Book of Hollow has been published, I can no longer avoid confessing and thereby bringing the honest truth to light.

This book is a real revelation and describes, with the help of reliable witnesses, almost all the places where Jim Morrison stayed after his alleged death, in Senegal, Australia and New Zealand, Poona, even on a yacht off the California coast, as well as in Jamaica, the Czech Republic, Dresden, London, on La Gomera and on Jacob's Path in northern Spain. Two small text excerpts here. At the top, a GDR police transcript of a concert of a rebellious group "Die Türen" in Dresden, where Jim also sang "Break On Through". This is followed by my translation of this song into German. The GDR agents couldn't find me back then.  The information that I had met Jim by chance in Cádiz before the recordings of my CD "Jim's Legacy", when he came back to the Spanish mainland on a ferry from La Gomera, I had withheld from Hollow. This meeting and my penchant for old Doors songs confirmed my kinship with Jim, and I spontaneously offered him hospitality at my house in Cádiz, not the one that was currently being renovated, but another one that I had bought years before. He would only have to take care of this house. And since Jim was also an absolute fan of seafood, he liked it here very much. Yes, yes, nobody believed it, but Jim even came to Madrid once and sang a few songs with us (Los Dooros). He just couldn't resist it!  Actually, he didn't look that different at this age than he did when he was in his Doors youth, but no one ever recognized him, or people thought, "That's a Doors tribute band guy".  Of course, I never took any photos as discretion was key, not even when Johnny Depp stayed with me after the renovation, and not of Gran Wyoming during the pandemic, because if such a photo came to public attention, it would have been a bad violation of the Corona regulations, even though Chechu was only officially present at congress. But in Spain, everything that can make a politically important person look bad is immediately exploited by the opposition right wing.

Die Ärzte (The doctors) in the daily TV news 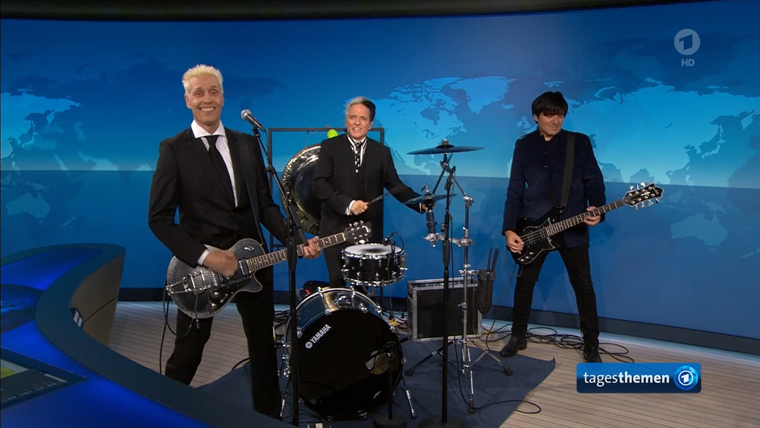 How nice. The “Die Ärzte” show opens with the theme played on our Starplayer TV-Outlaw!  Awesome!

Here is a nice video of various guitarists from Madrid (let's play some Rock'n'Roll on the village square!) 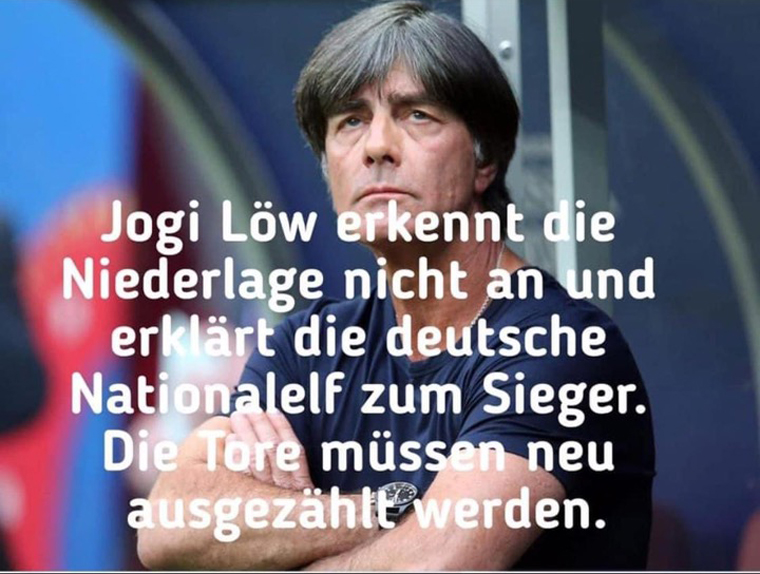 (Jogi Löw does not accept the defeat and declares the German national team the winner.
The goals must be recounted.) 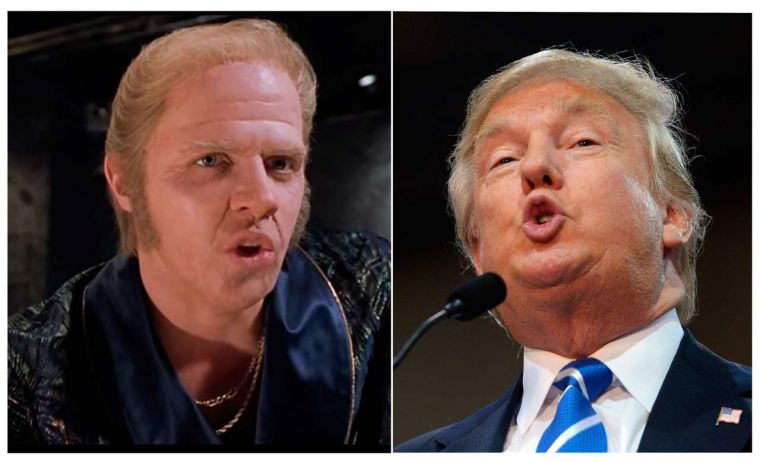