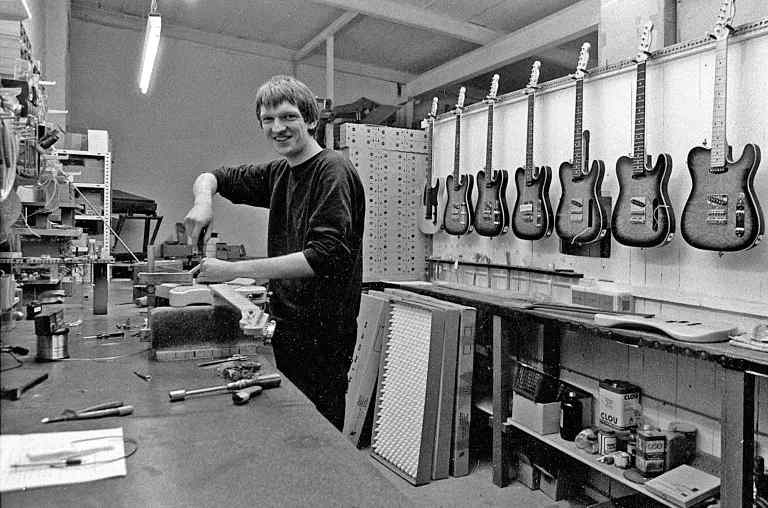 In the meantime Jörg Driesner had also started with us and is still working in our Göldo/Duesenberg company. Jörg is and remains a Braunschweig native and therefore (or nevertheless) a man of dry humor. Therefore extremely endearing. Unfortunately, at the end of the 80's he had shortened two fingers on a circular saw in a Brunswick joinery - the beginning of his new lap steel career. 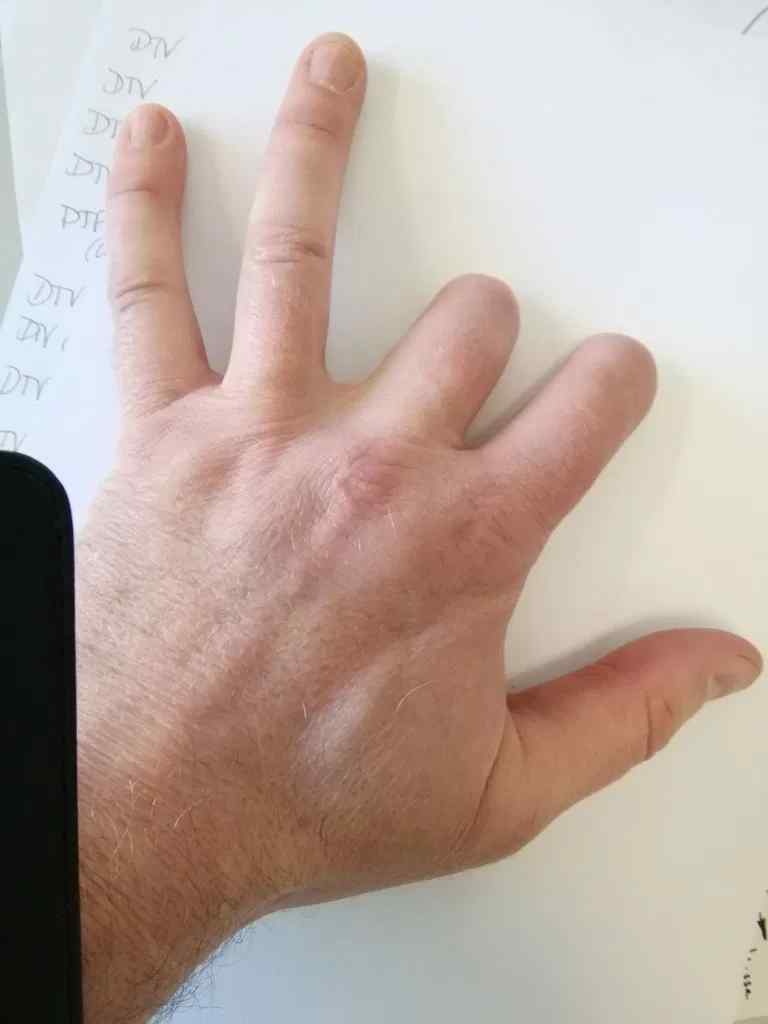 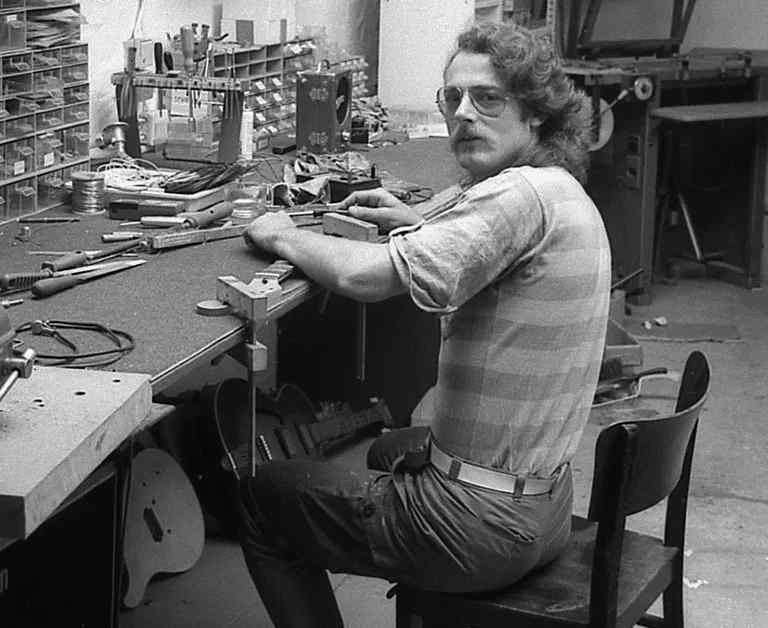 The work became more and more and soon Bernd Röttger started to work for us as a repairer and assembler. The first act of force was to put an extremely decorative, partly mirrored guitar podium in our showroom. Thanks again, Bernd, great! 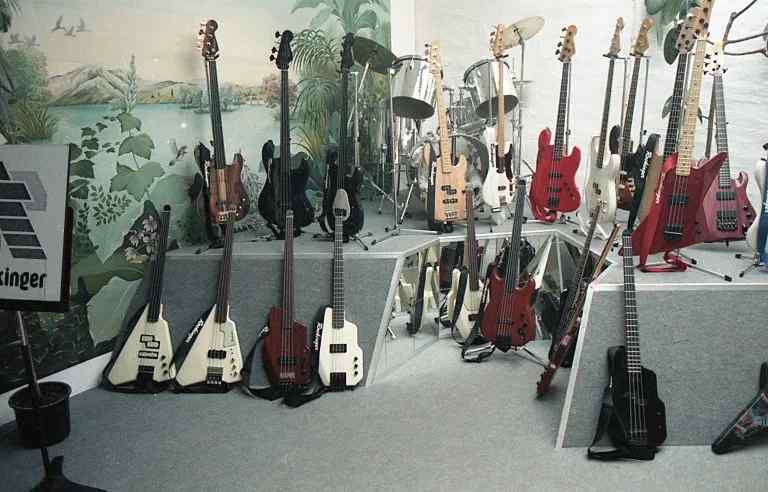 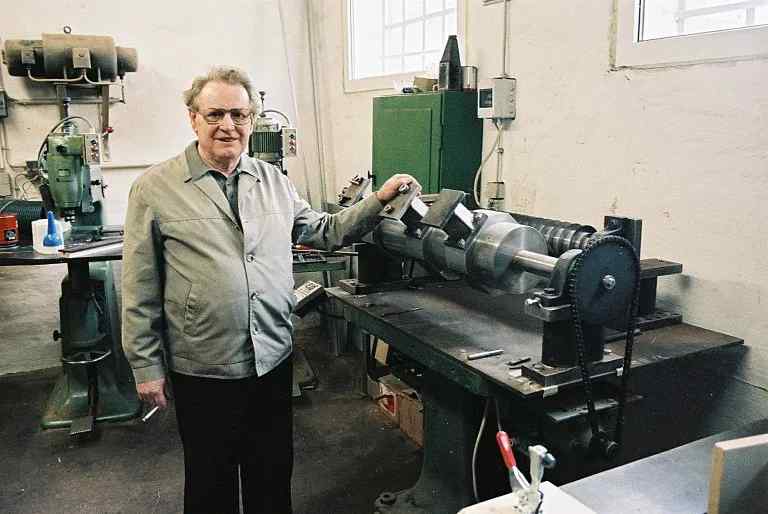 Our magnificent fret saw was built by a certain Friedel Osburg. He was an old Russian fighter who was "lucky" to have been hit in the leg by a grenade ricochet. So he was able to limp home and escape the inferno of Stalingrad. Osburg - who died in the mid-90s - was a mechanic and had a workshop in the working-class district of Hanover-Linden. Well, he wasn't a normal locksmith, but much more sophisticated: two lathes, milling and punching machines and whatever else. A certain problem, however, was that you had to endure at least half an hour of Russian stories at the beginning of every visit. But at least in that wonderful Linden dialect: "The Russians also had women in the army, and they were tougher than the men. Always with the bayonet right in, like animals"! Russia or no Russia, Friedel Osburg was no Nazi and a resourceful man. He made everything for our machines: tons of start-up pins and rings for our copy mills, glue press tools for bodies and so much more. Simply wonderful! Plus a punching and bending tool for the trussrod gear adjustment of our first Duesenberg Metal guitars in the 80s. When he had a good idea for us, he used to say: "Let me make you smart!" 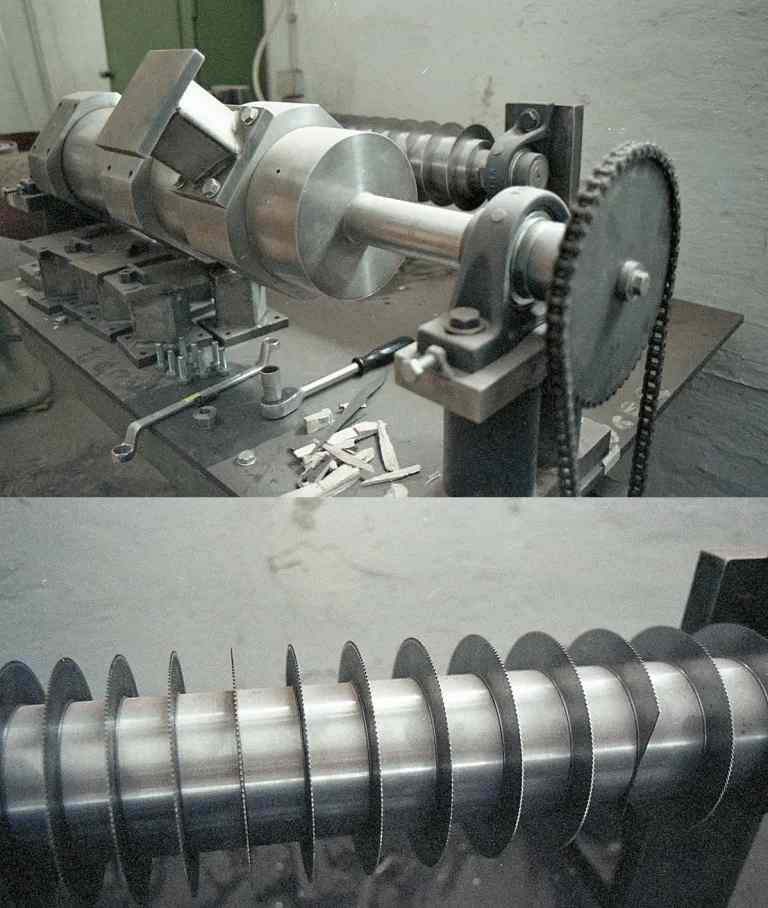 Just our fretsaw machine, a really ingenious monster! A thick shaft with 24 saw blades and mounted in front of it an extremely massive unit that could be swivelled by a chain gear and on which four different necks could be clamped. The neck then swung through the saw blades at the push of a button, all the fret slots sawed at once and done. However, we always had certain concerns about safety because this plunging of over 20 saw blades into the fretboard wood during this sawing process meant a killer force. Wearing a helmet was the order of the day. Once, while sawing, a bass neck was actually cut and some saw blade splinters flew through the room. Fear and horror including financial damage. 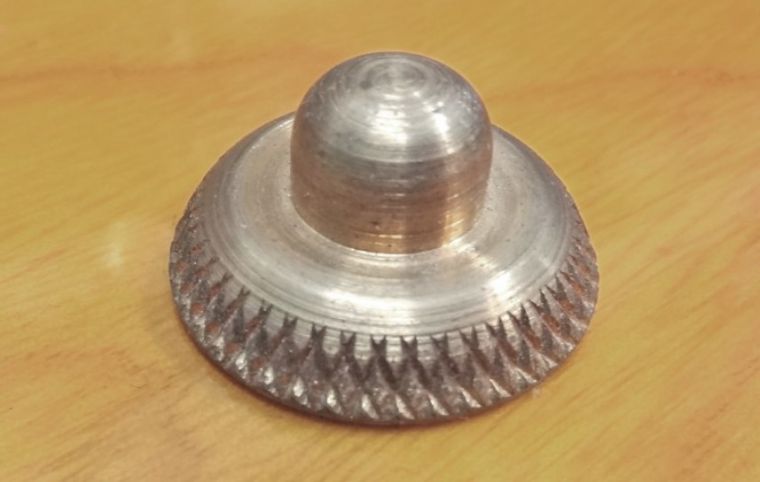 It was also Grandpa Osburg who created the nipple-shaped pot knobs of our Heilmann guitar on the lathe, which was no easy job. And he was still interested in women and sexual intercourse. Once he remarked in passing that he would still pull "his old lady" on the hook sometimes in the morning ... He also used to shoot pigeons with his air rifle in the yard at lunchtime. And he owned a small moonshine distillery, a large glass structure made of various pipes and tubs, in which he distilled potato schnapps in particular: Illegally, of course.

At that time, most guitar builders and smaller manufactories had their guitars varnished by the Clover company in Recklinghausen. They did a great job, but this endless back and forth by mail or UPS was really annoying. And the painter we found near Hannover was also great. But we still had to do the driving. Bring it there, pick it up. Bring, pick up .... So we decided to take the painting into our own hands as well. We needed our own, official painter! And we actually came across our Sascha.

Sascha, born in Russia, and now far away from home, actually wanted to become an astronaut (like all Russians), logo. But then he miraculously completed an apprenticeship as a guitar maker in the Bavarian luthier's Mecca Mittenwald. But in the company there he had mainly painted (exploited, like most apprentices), so he knew everything about it! Bernd Röttger, always a man of action, had constructed and welded together the varnishing booth shortly before. We were prepared. 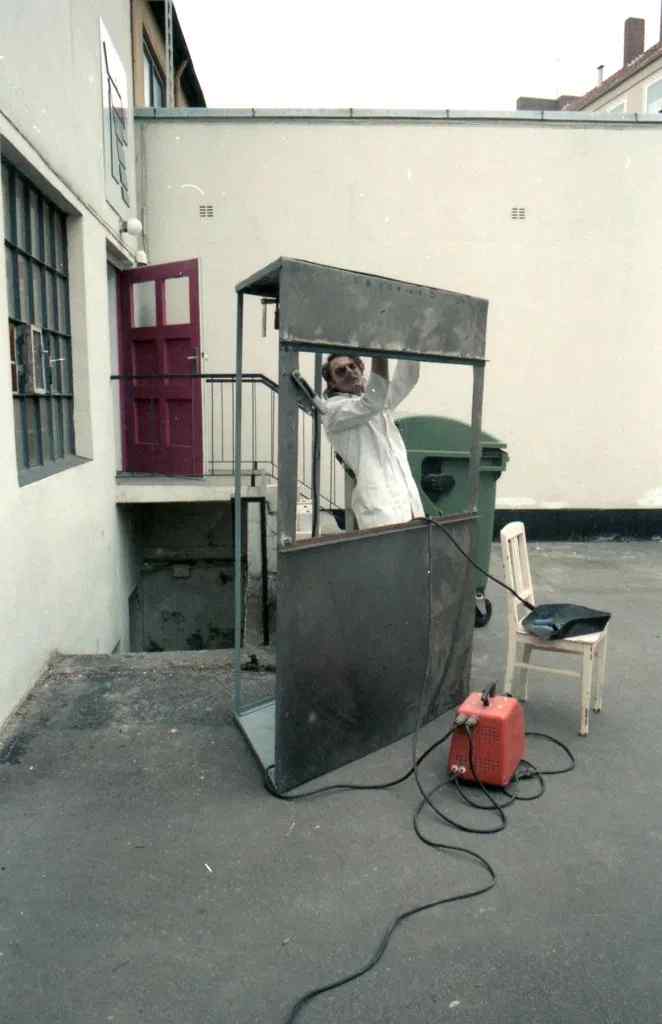 We were the only ones in Europe at that time to offer a Tele with the string bender (Parsons & White). In this system, the upper end pin moves a mechanism in the body that lowers the B string. Here we see Heinz Rebellius with our creation. 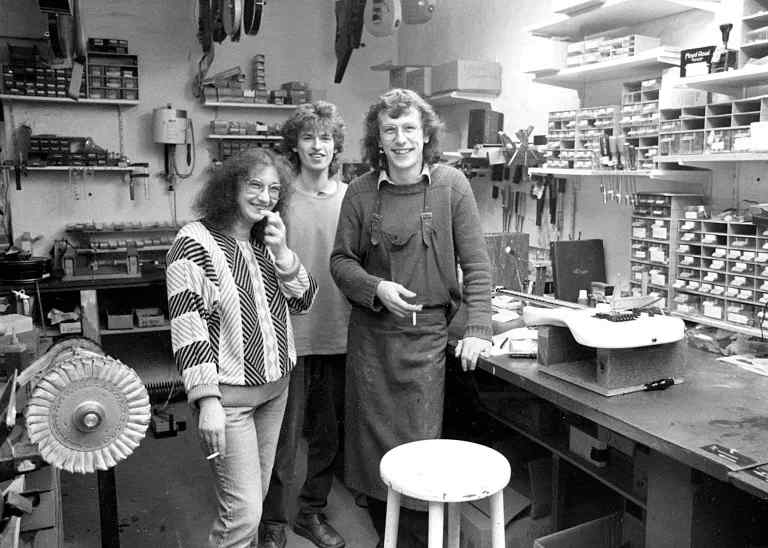 Then Thomas joined us, a skilled and ingenious carpenter, who mainly did repairs and assembled custom instruments. With him we later founded "Formentera Guitars" - the world's first school for guitar building. And that on this at that time crazy island.

In 1983 I was on this enchanting spot for the first time. Truly a small paradise with Caribbean water, totally relaxed beach bars, live music, individualistic young people, fiestas and rock'n'roll (however you interpret it).

But the dream of a guitar building school on a beautiful island was not forever. Unfortunately, our Formentera Guitars project went downhill for several years. I could publish more about it here, but not without offending some people. You can read more about it in my book "Angst & Schrecken auf Formentera", which I wrote in 1998. You can get it in a bookstore or even from a mail-order company where you can get everything you need (which is better not to buy from).

Review: what creations we have magically created! Colors, shapes and combinations, full of them, look here! 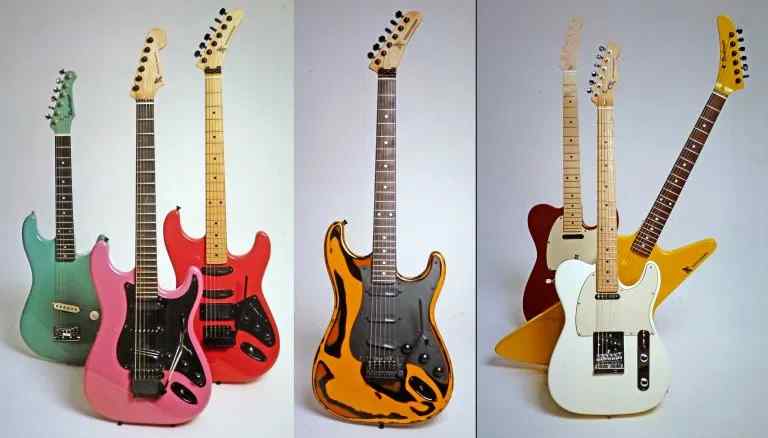 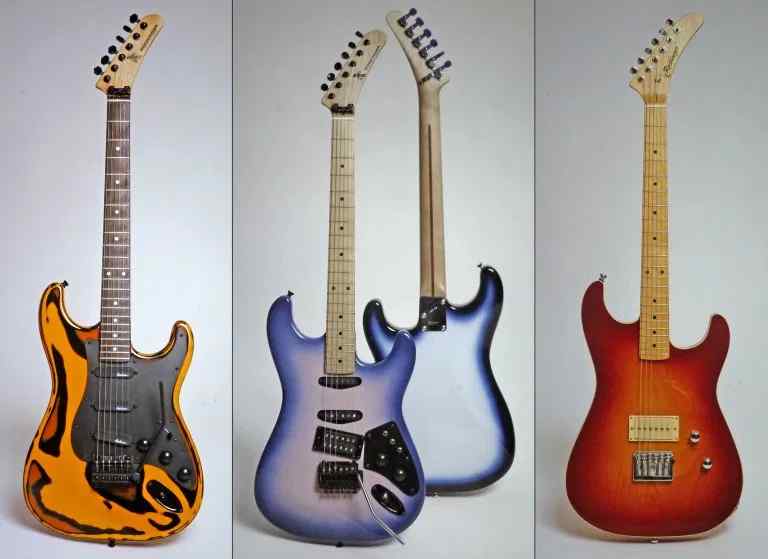 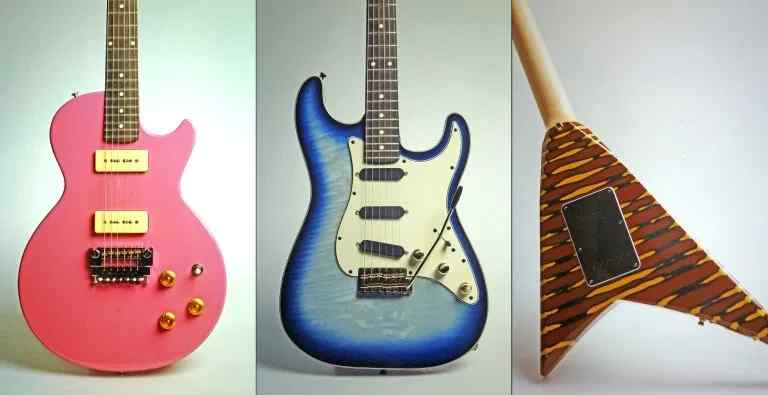 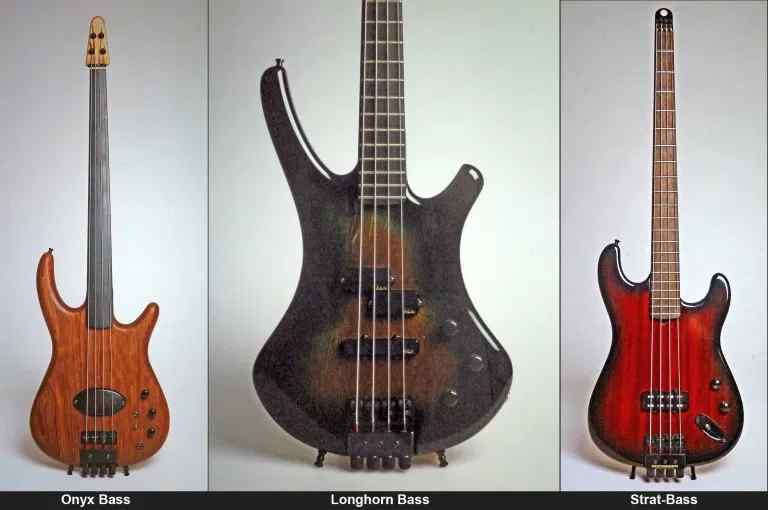 In terms of "super-custom" we also made two exotic basses for Peter. The first one with a slim Explorer body, the second one was the "Eagle Bass" which became a real legend. In both bodies a buddy of his carved feathers and other stuff by finest hand. Peter had just reformed his first band "Fargo". But he became even more famous with the formation "Victory"! 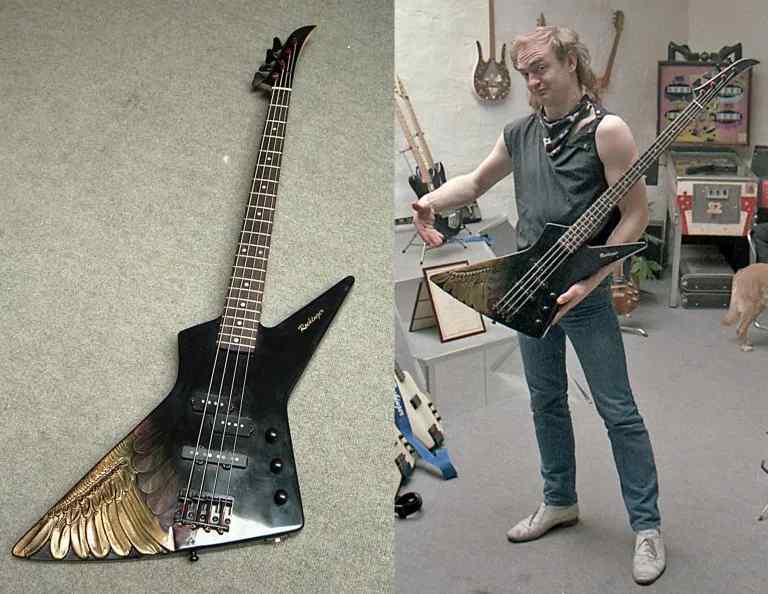 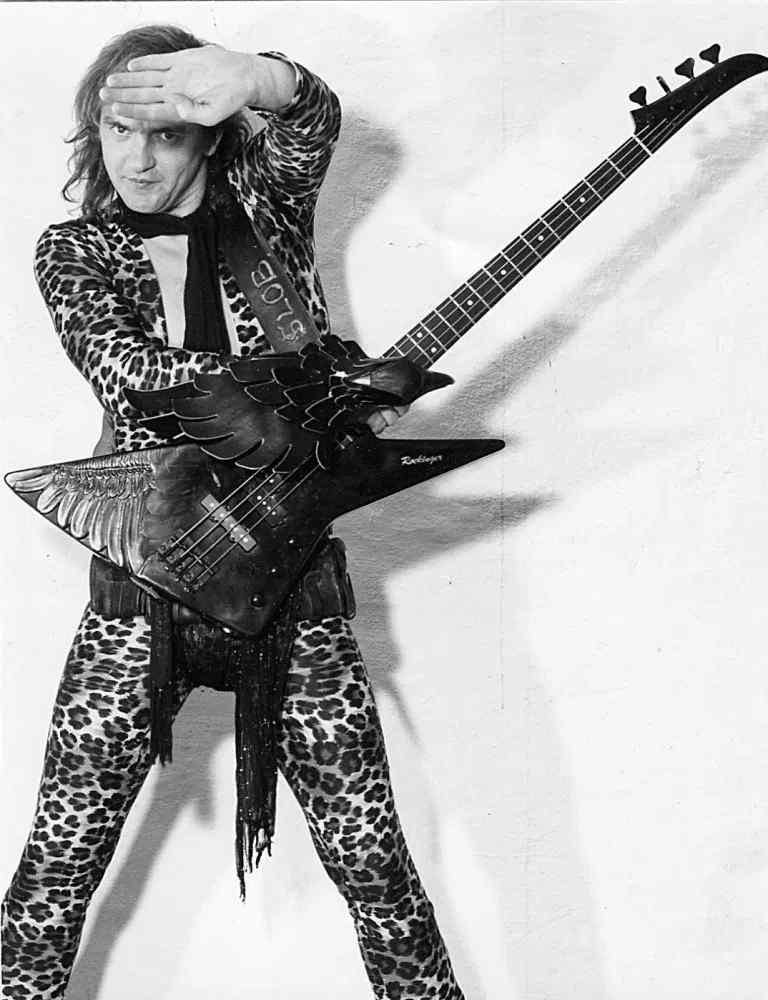 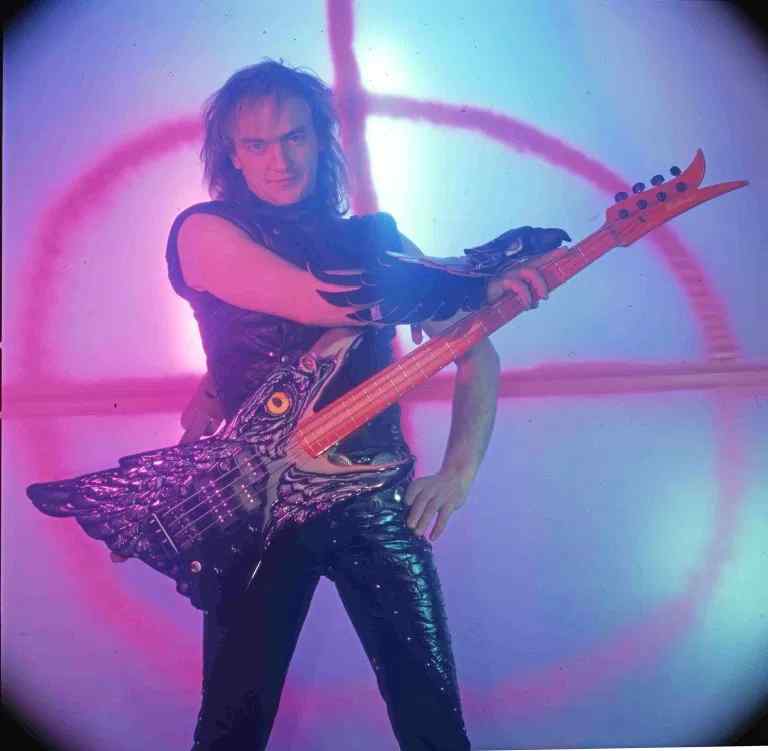 After the big workshop rebuilding we really got going. Our machinery became more and more sophisticated, especially thanks to the loving help of grandpa Osburg. For example an ingenious fretwire cutter. Ingenious, simple with two about 15mm thick steel discs on one axis and outside holes with different diameters for different fret wire sizes. One buys fret wire in bulk on rolls. You put the wire through the two holes, pull one disc against the other with a long lever, and when the wire cracks, that's it! And a stop for the right length! 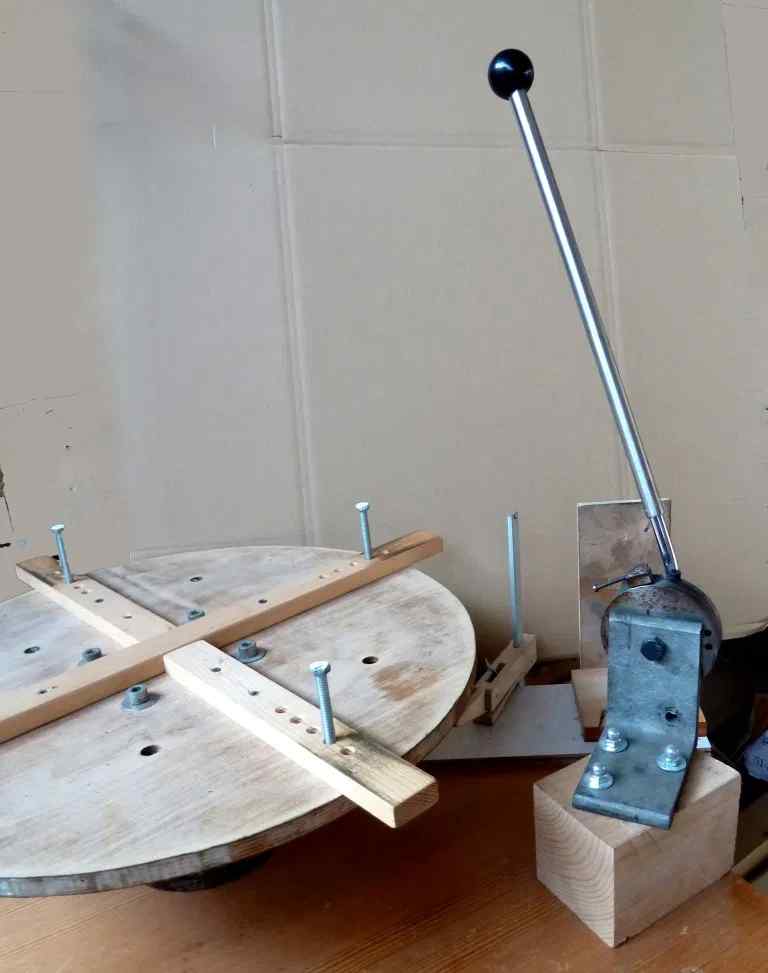 Now also the carpenter Klaus Winkelmann started with us. He was responsible for the wood preparation, i.e. formatting, dressing, gluing, planing to thickness and shaping. And we had installed a gigantic extraction system for chips and dust, thick silver pipes running through the rooms. 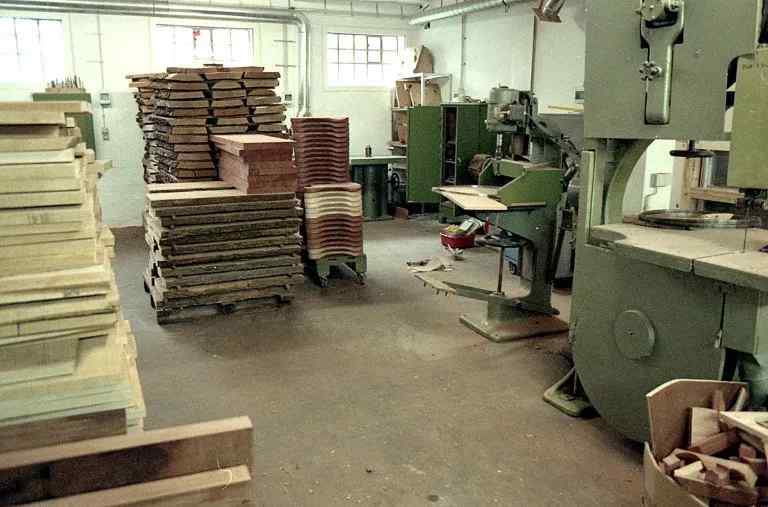 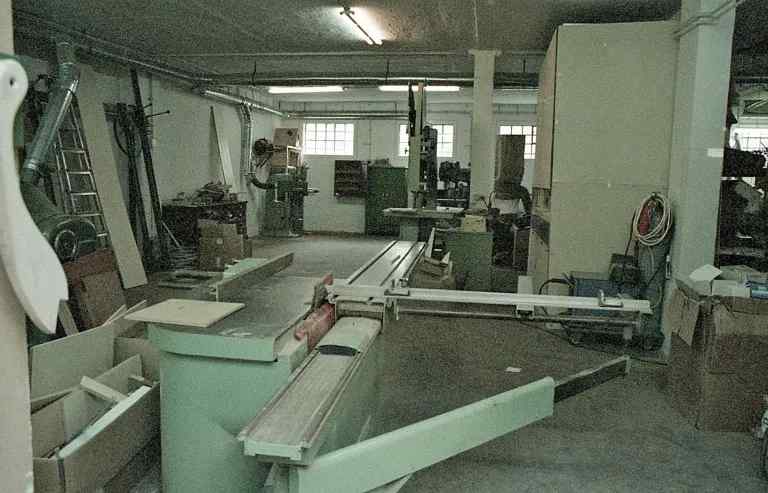 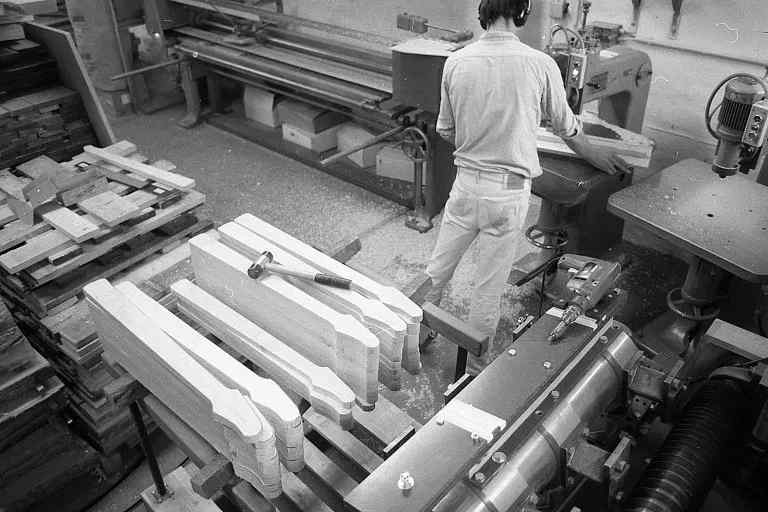 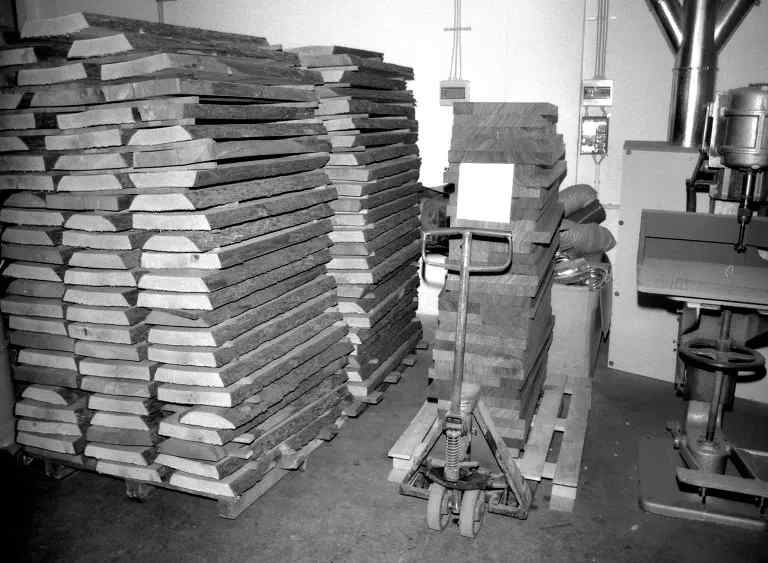 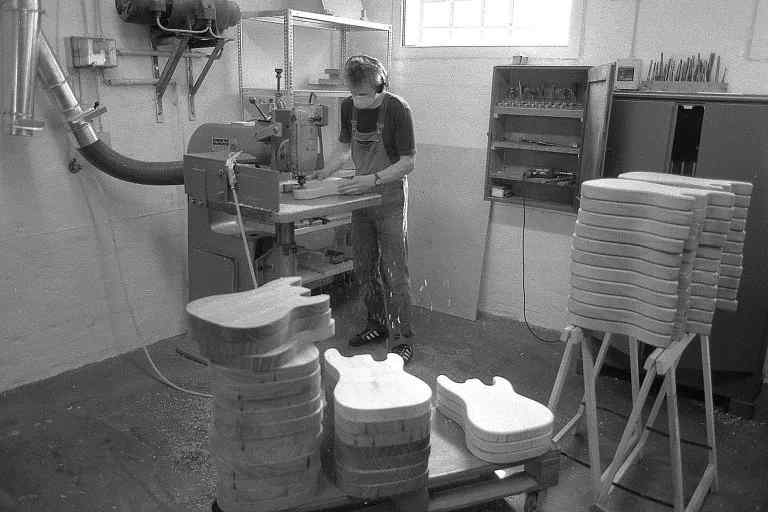 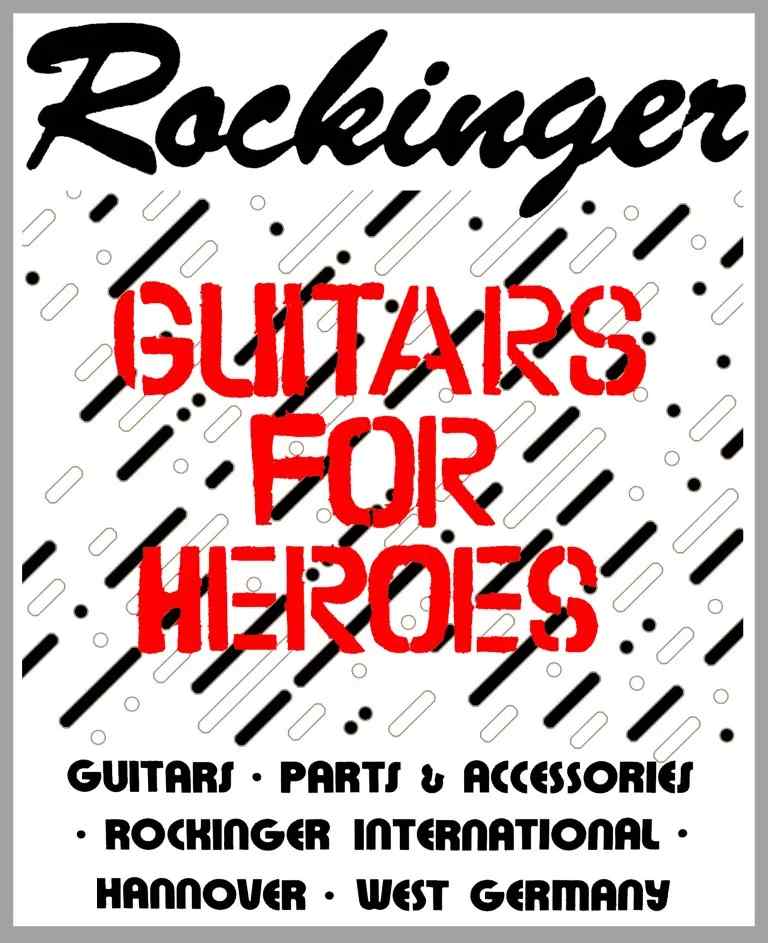 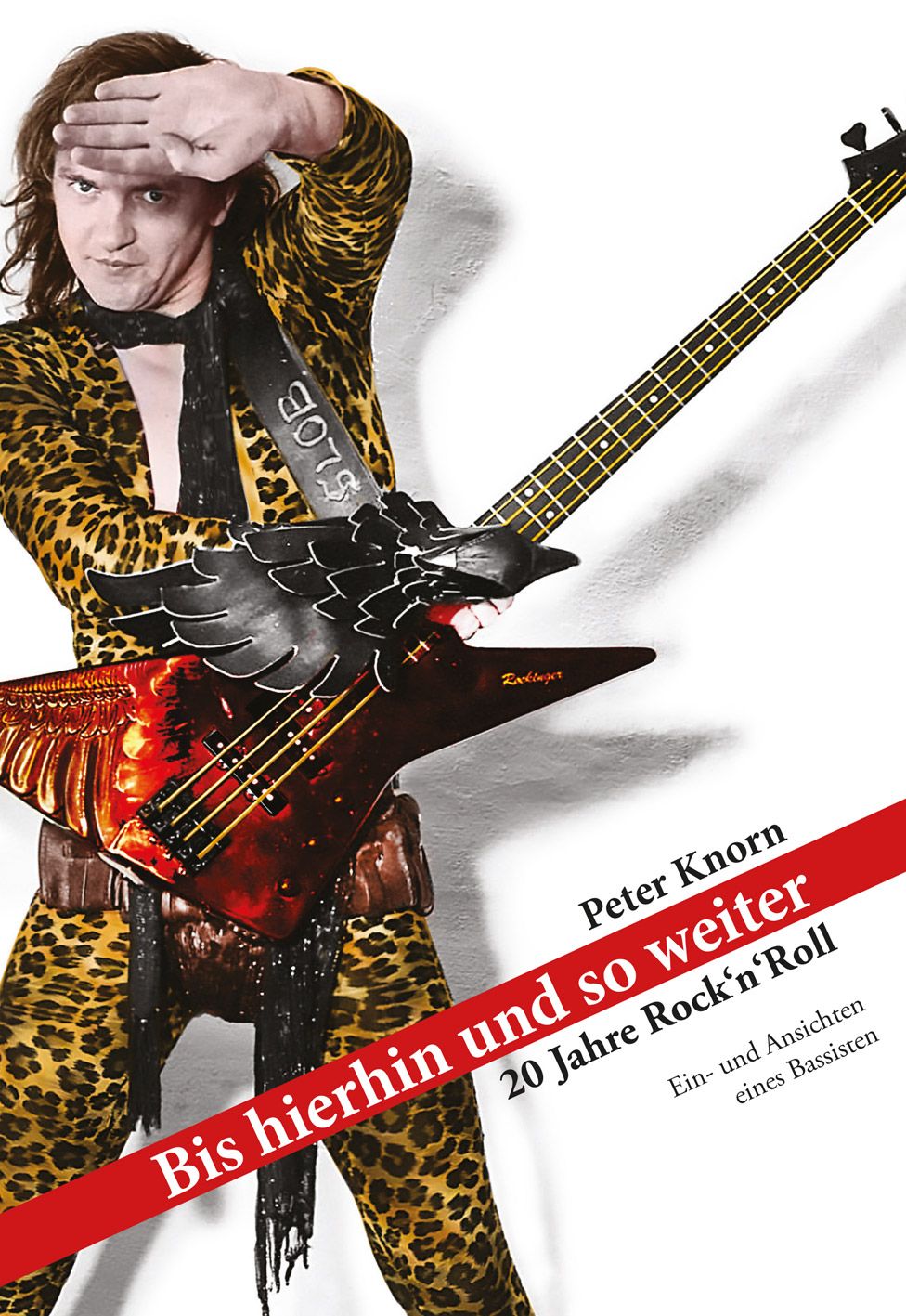 May I introduce? His name is Knorn, Peter Knorn, better known as Fargo-Peter. For six decades he has been stirring and shaking, living and dying a waking dream almost every day, hoping that this dream will come to a harmless end.

The person Knorn could basically be anyone. Some initially harmless, well-behaved 16-year-old, who through no fault of his own got into the supposedly glittering world of rock'n'roll and decided in 1973 to become a musician, or more precisely: a rock musician. Until 1993 he was involved as a bassist in a good dozen album productions, and defended them with his bands Fargo and Victory at many hundreds of concerts around the world. After that, he no longer stood on stage but behind it, setting things in motion for other bands, was manager of internationally renowned rock stars for ten years and ran his own small record company.

When you have been part of a hand-picked circle for so long, you uncover inconsistencies, consciously or unconsciously. Incidents which at first do not strike the outsider, but which can nevertheless be highly explosive. Now the truth must come to light, not in slices, but in pages. The world should finally learn why some bassists need a stuntman in the studio, why singers prefer to cry on the shoulders of bassists, and that bass men are basically peaceful herd animals - if they are irritated.

And if they do? Then - please - all nerds will be upset by Knorn's intelligent puns and his sometimes wonderfully outrageous puns. Even at the risk that this could develop into a mysterious wave of suicide. For one thing is clear: the Hanoverian's activities may have calmed down to about the same extent as his neighbors' nerves, but his pointed pen could easily open up old wounds.