May is one of the best months for a trip to Italy by car.

Foreword
Aldo is Italian and was a waiter in the early 1980s in "Milano", my favorite restaurant in Hannover at that time. Aldo was attentive, likeable and sometimes quite entertaining. Especially when he was suddenly chasing a supposed annoyance: If he was aware of the attention of some guests, he would walk straight to their table, carrying an espresso cup (on a saucer and spoon) in front of him with an outstretched hand. Quite normal ...
Invisible to everyone, that the cup was empty and the spoon was "hooked" into the handle.
When he arrived at the table, he simulated a stumble, with the guests at the table regularly crying out in panic. As is well known, an espresso is hot and leaves annoying marks on clothing.
Only when the alleged victims had calmed down, the sounds of pain and annoying stains had disappeared, did they realize that nothing at all had happened. The cup was empty anyway and dangled harmlessly from the spoon that Aldo held on to the saucer with his thumb.
The initial screams of panic turned almost seamlessly into loud laughter. Sometimes even into applause. 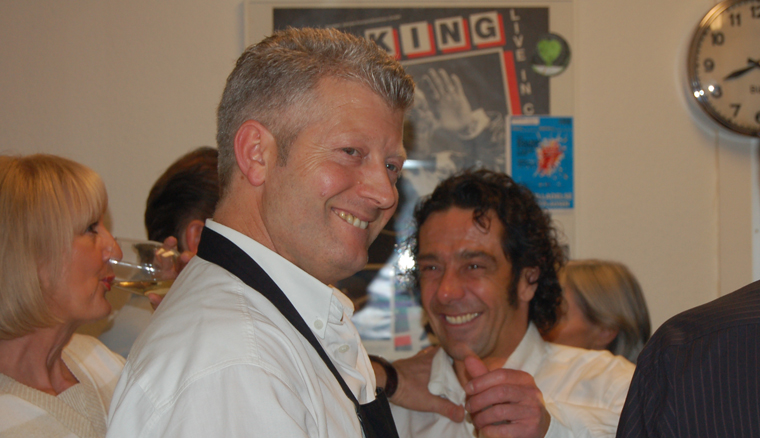 So popular with his guests, it was actually only a matter of time before Aldo opened his own restaurant. And it was in Isernhagen, a gathering place for the nouveau riche just outside Hanover.
Aldo's wife, Luana, comes from Pesaro, a small town on the Italian Adriatic coast, the birthplace of Rossini. In his honor there is a music academy and an annual opera festival. From the windows of the houses one can often hear the music students practicing their violin and cello scores. In addition, until about 25 years ago, a music fair was held there, which is why I came to this beautiful little town for the first time in 1985. Music, music, music ...

In Pesaro, Luana's brother, Lorenzo, ran a fine restaurant called Bristolino. Sophisticated Italian cuisine with a focus on seafood. In addition, a simple osteria in Pesaro offers the best pizza "bianca" I have ever eaten in my life. All this together is reason enough that I always like to make a detour to Pesaro when I travel to Italy. This time as well:

I had reserved a table by phone under "Dieter-Atze - friend of Aldo and Luana". The Bristolino is a flat porch of the Hotel Bristol, with about 300 square meters of floor space. Everything is perfectly decorated, even if with a strange touch of asian flair, everything is somehow trimmed for chicimicki.
At the door, the first question from a small-sighted, petite woman in her fifties: "Reservato? "Si, de nombre Atze". She asked us to a table near the front door. Immediately the ordered water and a pizza bread arrived, in which some cherry tomatoes had been pressed before the baking process. Delicious and unexpectedly satisfying ... while we waited for a bottle of regional Verdicchio white wine.

Finally Brother Lorenzo, the god of the temple of food, came to introduce himself. Without knowing it, I "outed" myself as a friend of Aldo and Luana, giving warm greetings from his sister. But this was obviously a mistake. Lorenzo had no interest in greetings from the sister from Hannover. Something was running very unevenly here. The only conceivable explanation: at Luana's insistence, Aldo had also joined the Jehovah's Witnesses about 20 years ago. As a result of this folly, he had lost a bunch of extremely wealthy guests and had had to lower the quality of his kitchen. Beyond that, however, I suspect that this sectarian nonsense may have worsened or even levelled the playing field with his brother-in-law Lorenzo. But as it soon turned out, this would have been the only thing that could have been to Lorenzo's credit.

After a short, discreet handshake, he went over to the daily schedule and presented us with various recommendations. So no card, no prizes, just trust.
But that's okay for me, as long as the food, drinks and ambience are all right. The chef explained that his cuisine was of the lightest and recommended to start with a mixed seafood platter. And as secundo we ordered monkfish fillet from the oven. All right, the starters would be served on a big plate anyway and we could choose who wanted to eat what or not... Well so far.

But there was no big plate, but first a plate with slices of swordfish carpaccio. Very decoratively arranged with pomegranate seeds - but not ordered. Shortly afterwards gambas ala catalan came on the table, halved scampi - also not ordered.
We had already reached saturation level. And the scallops were still to come. In any case, there was no more room in the stomach for the monkfish. Against this background we cancelled the monkfish. No problem ... one would think.
But the small-faced waitress took this rather horrified and almost anxious on record and immediately expressed doubts whether this could still be done with the kitchen. But I confirmed our request. Since we had ordered monkfish "out of the oven", it could not - in view of a certain cooking time - be that it was already in the oven. "Logical, right?" 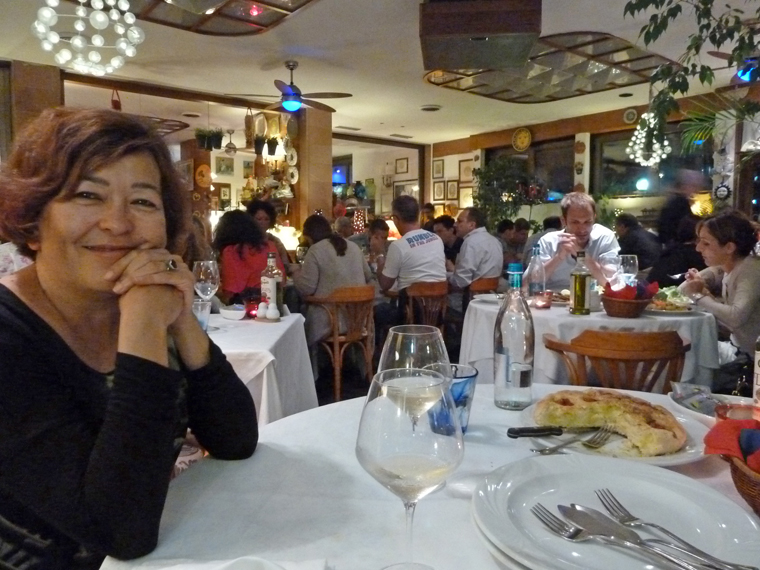 This was followed by 50 minutes of stress, during which the waitress came to our table several times with a tearful face to let us know that she had met with considerable resistance in the kitchen when we cancelled the order: the attempt to reach a diplomatic stalemate to our disadvantage. The scallops served in the meantime were to serve as a forewarning: typical deep-frozen food, without those otherwise common orange appendages, gratinated with onions and breadcrumbs, the mussel meat with a slightly fishy character. Now we were fed up and no longer wanted to discuss the cancelled main course. Paloma left the restaurant immediately, suggesting that she wanted to smoke a cigarette outside. Looking at the next table, I pretended to put banknotes under the wine bottle, went to the toilet, grabbed my jacket when I returned, and so we disappeared. Bye, bye Bristolino!

The next morning I received a call with an Italian number. Probably brother Lorenzo. Sure, he had saved my phone number from the reservation. But by then we were already on our way to Toscana. I just pushed the call away, ignored it, like my monkfish cancellation. Fuck you ...