And in between: In the morning a hearty breakfast at Disney's "Mimi's Café" and once in the evening a "monster burger" at the "Heroes" in Fullerton, because Nathan is not really into fish and seafood and noticeably increased his body weight every year.


And until 6 pm "pomonous" at the NAMM

This time our "hammer" was the new Pomona Lap-Steel. Yes, the aluminum profile for the fretboards was finally delivered, and we immediately made our first prototypes. In the meantime we had also developed a special lap-steel bridge. And the Americans could not believe it. These Bender levers, the sliding Kapo, the sound and the handling. We were absolutely far ahead, especially since there is still no competing product to our laps. 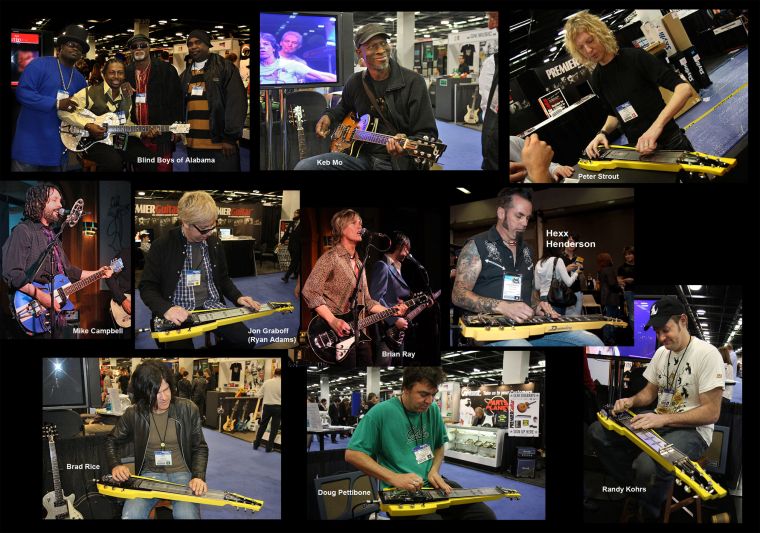 blue-white at the Ballroom 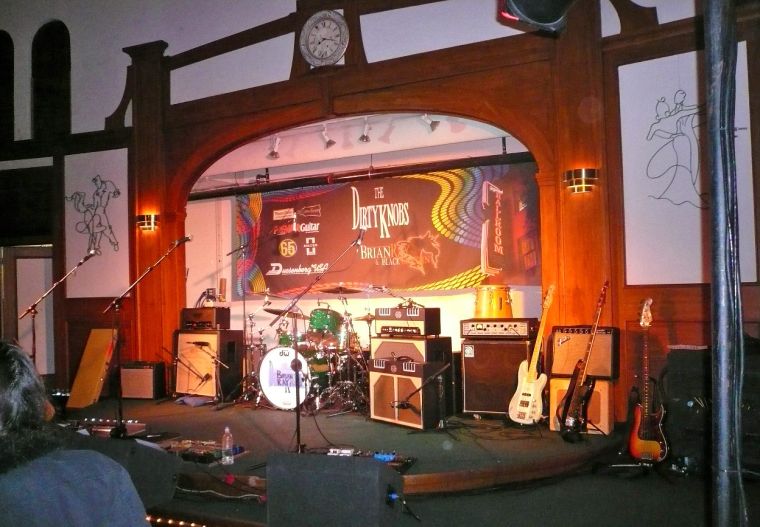 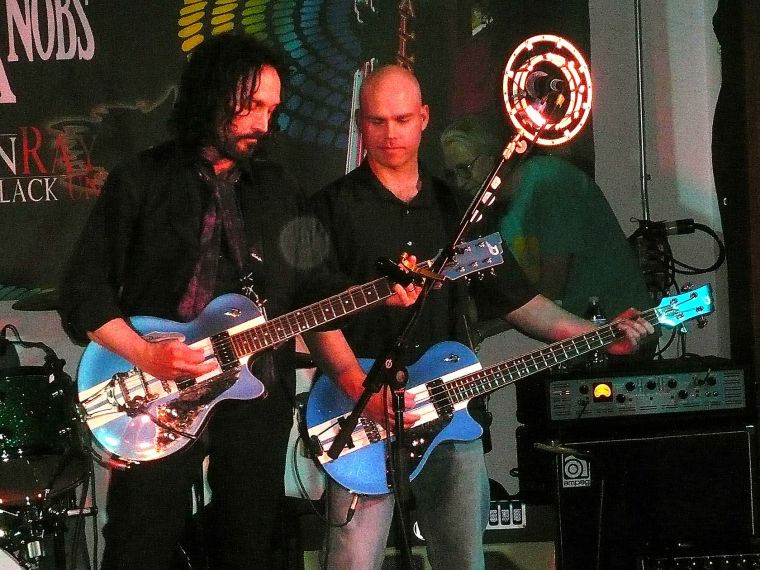 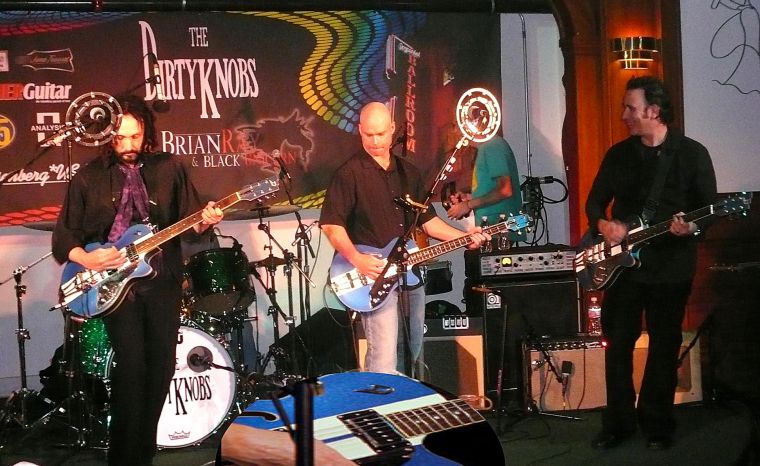 Saturday night again Mike Campbell & The Dirty Knobs in the Ballroom. That was a nice concert, and Mike is simply a highly respectable musician. 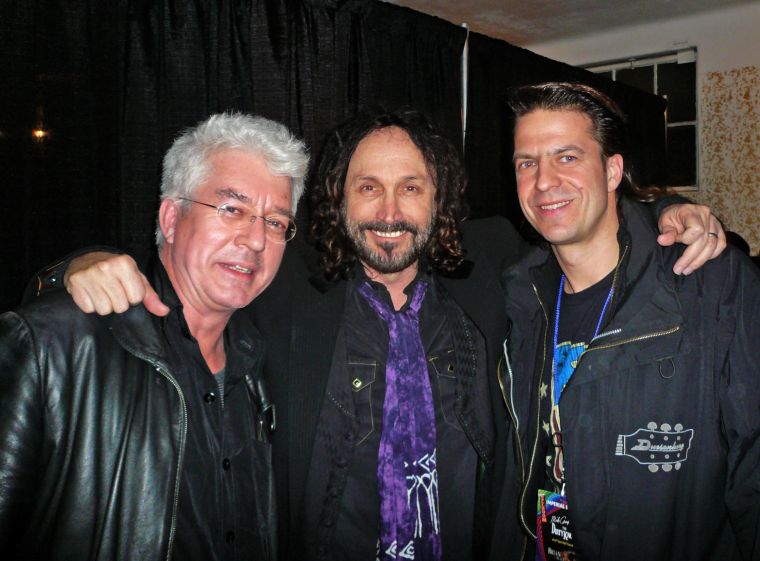 The year continued well. At the beginning of February 2008 Tom Petty & The Heartbreakers were engaged for the Super Bowl event. This is the world's largest sports and media event in terms of TV viewers of over one billion people. And our good Mike played half of the songs with his blue and white Duesenberg. And that with a hammer sound! Meiomei, a professional TV-clip during this event would certainly have cost an official advertiser in the 6-7 digit dollar range.

In the same year Gabriel Mieth and Ulf Schmidt joined us. Two young guys with not only technical but also digital qualities. Gabriel, a rockabilly man, who played bass, drums and guitar, assembled guitars and from then on produced the circuit diagrams that were included with our guitars. And Ulf had just cancelled his employment at a large bass and guitar factory in the east of our republic because of unacceptable working conditions. 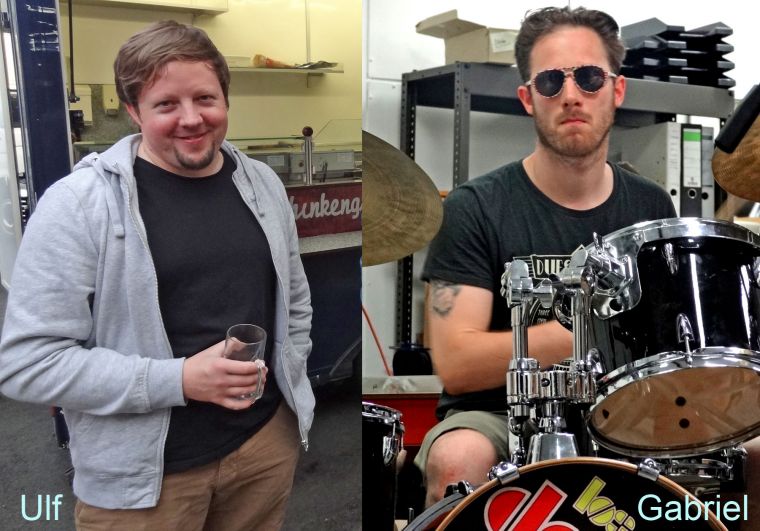 Anyway, these two guys brought a breath of fresh air into the company, and we decided to buy a PLEK machine. PLEK: this is this computer-controlled machine, developed by a Berliner named Gerd Anke, which can do a better fret job than a luthier with all his files and dressing blocks. If you don't believe it, watch this video! 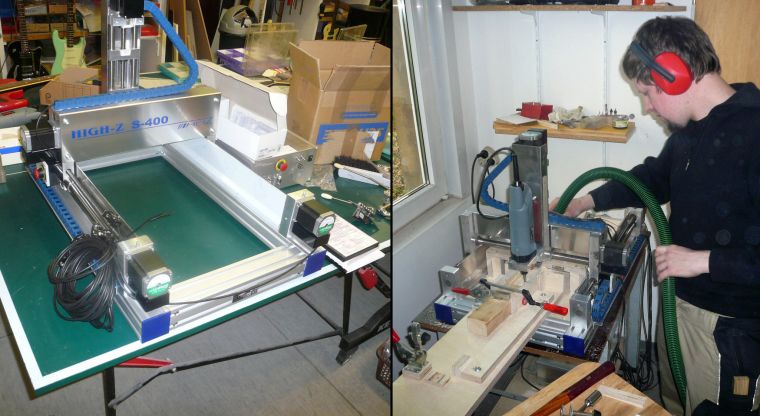 To overcome our last scepticism at that time, we decided to order a small CNC machine to test how such devil stuff works. The first thing Ulf did with it was to mill various fair displays for our parts and engrave fonts.

Ingo, Martin and me for the first time at the Summer NAMM in Nashville!
Nashville is perhaps the most important of the American music centers. There are lots of recording studios, and live music is available in at least every second bar on the street. And all the guys who play there are so amazingly good that you can't believe it. Nashville is not so much a city of stars as it is a huge reservoir of super professional studio musicians that anyone - star or producer - can employ for their recordings. And these musicians record everything perfectly and at lightning speed. 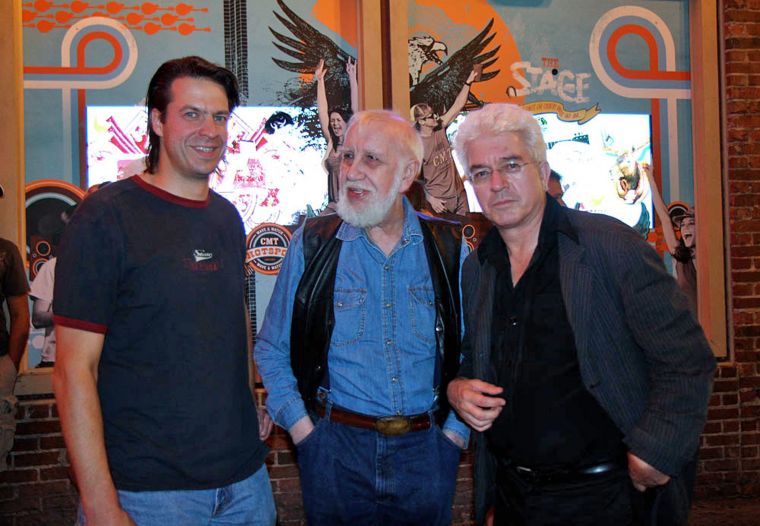 Oh, and it came to one of the last meetings with Bill Lawrence, who unfortunately was about to leave us. Bill was a really hot guy. This mixture "musician - physicist". And Bill always had stories to tell, and he didn't spare with a lot of physical data. And this time he knew to tell another story about an Italian who invented the "Humbucker" in the 18th century - a seismological device with two counter-phase coils to measure any earth tremors. 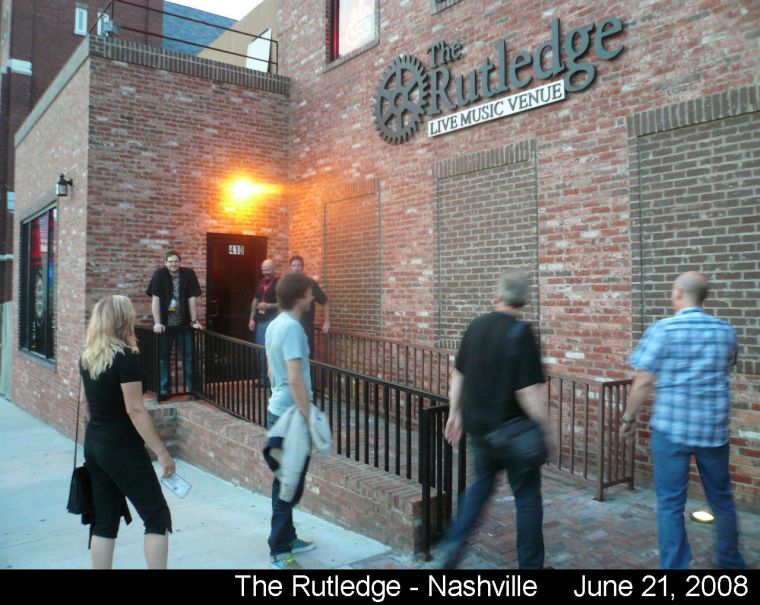 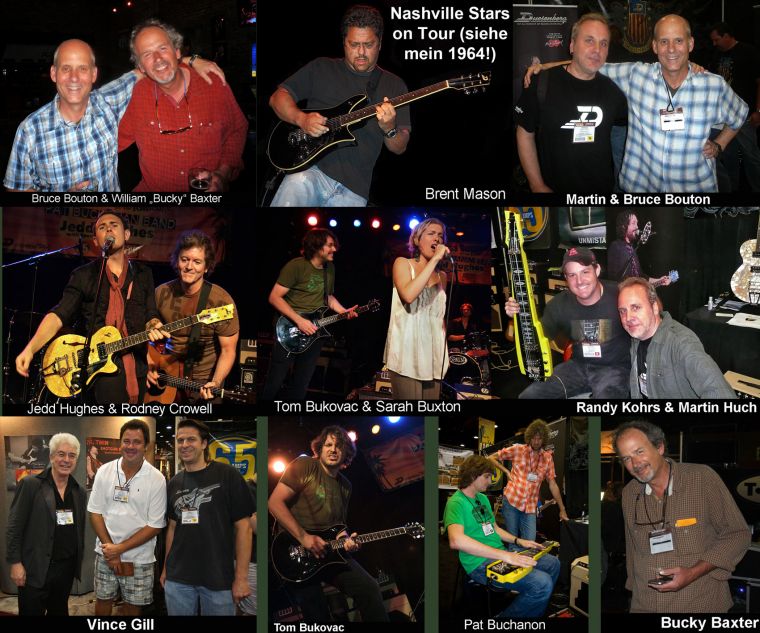 At the Nashville Country Music Museum, I bought some of these wonderful fly swatters, which I used during the summer for various massacres among the local insects. Someday we will release one of these in Duesenberg TV design! 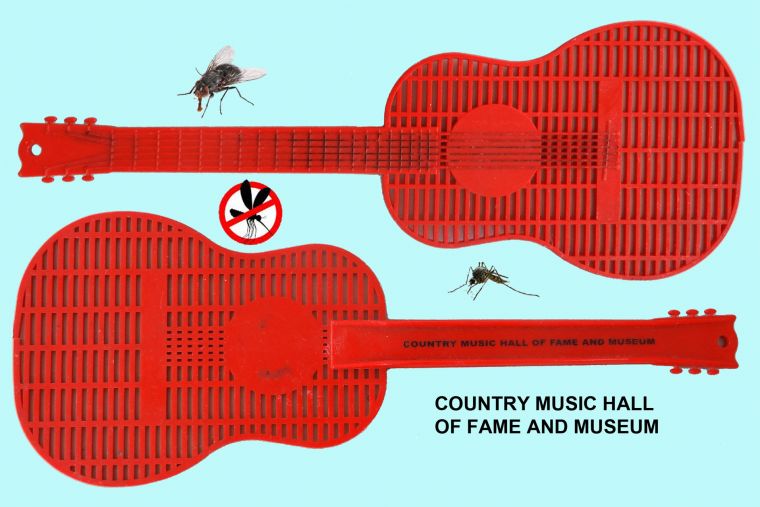 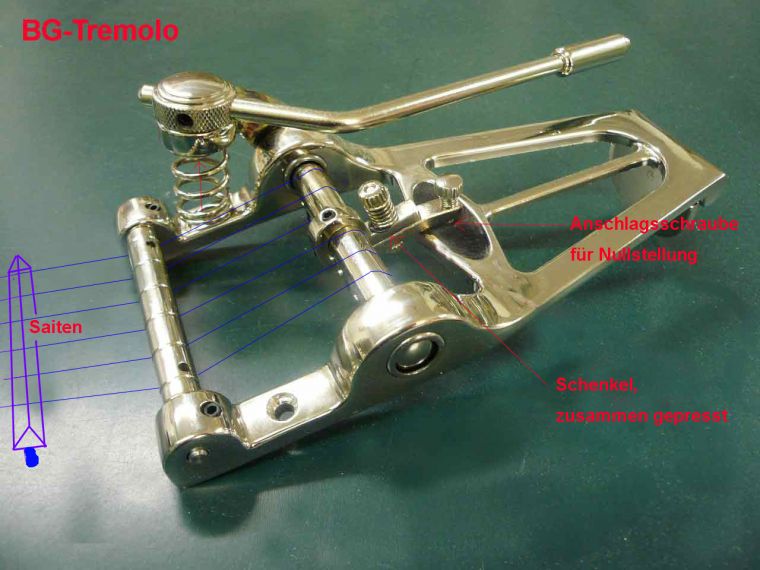 Our Duesenberg tremolos worked perfectly. But to keep them in tune even under critical conditions (e.g. string tearing), I thought about developing a "push away" zero attack (you already know this construction from our very popular Black Box for Fender tremolos).
How does that work?
A tremolo is generally a construction with two forces acting against each other: string tension and pressure (counter-tension) of the tremo spring). If one string breaks, the total tension of the remaining strings is reduced by the tension of the broken string. In relation to the force of the strings, the spring receives more force and all other strings are out of tune. To solve this problem in our tremola construction - as well as in principle for Bigsby tremolos - I have fixed this stopper with two allen screws in the middle of the shaft.

It basically consists of two legs which are pressed firmly together by a pressure spring so that they lie flat on top of each other. With a set screw you can lock the zero position at the back. When the tremolo lever is pulled up, the adjusting screw continues to touch the tremolo housing, but the two legs slip apart and rejoin precisely when the lever is released. (see photos!)

At that time, this invention was "nice" but not necessarily necessary for general use. Today, however, many guitarists tune the low E string to "D" for certain applications. And what more can you wish for than to have the other five strings tuned exactly? And pay attention to what will come soon as further development!

And at some point the big day came when the PLEK machine arrived and was installed and adjusted by the Berliners. 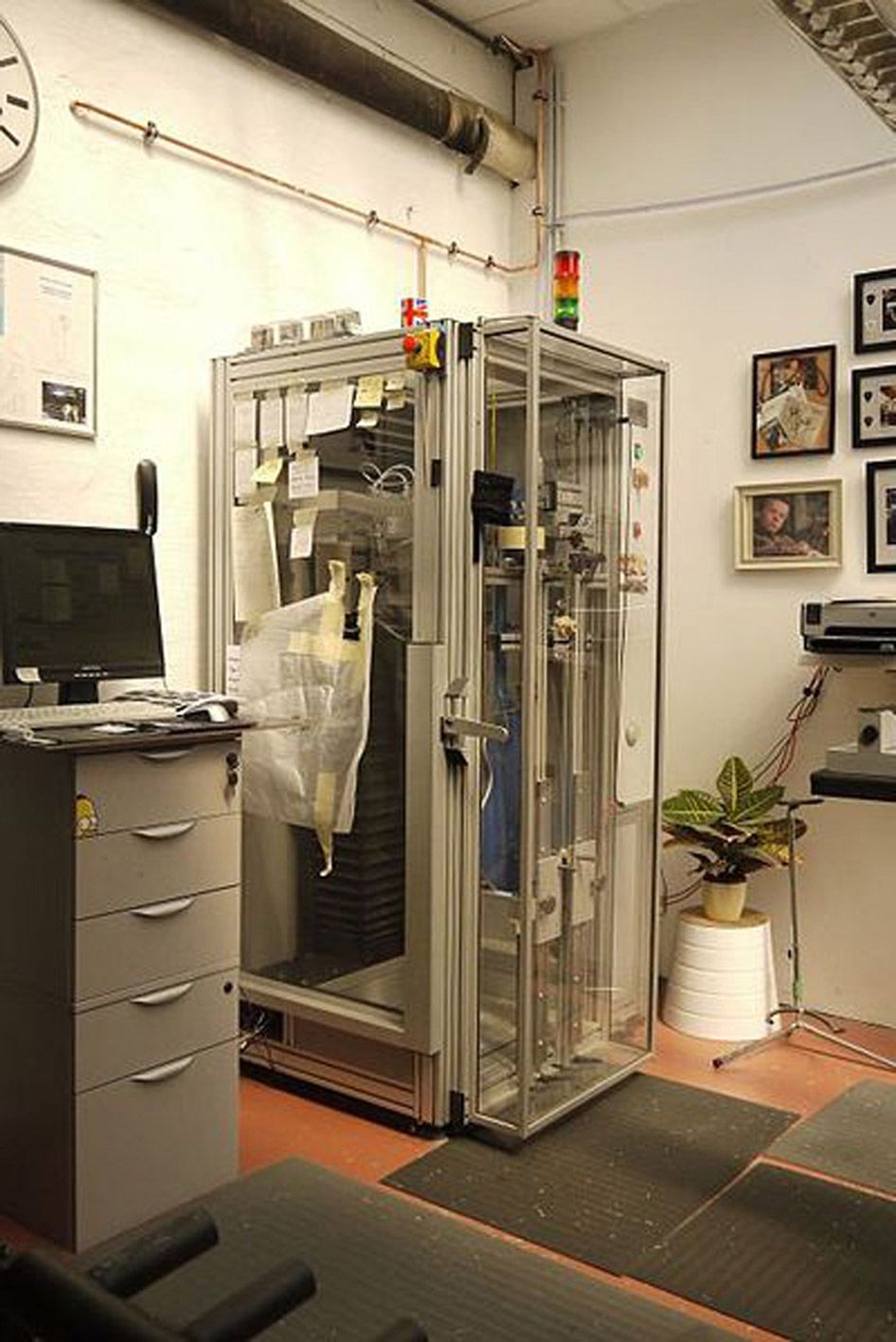 Shortly afterwards we had 0.5mm thick fretboard protectors laser-cut from stainless steel sheet metal to be able to polish the frets to a very fine finish after "pleking" without affecting the fretboard.

I remember that Thomas Stratmann and I laughed about it when this Gerd Anke and his partner Michael Dubach installed a PLEK in the Hanoverian PPC. "That can't work at all" we blasphemed ... especially since the very machine in the PPC had chopped and ruined several guitars, all of which had to be repaired by Thomas. The two guys also went bankrupt twice, but they never gave up, but - as is fitting - consistently pursued their goal. And "Hats off!" the PLEK is today a machine that is beyond any doubt.

What could be more natural for an old Les Paul Junior fan than to develop a new guitar that only has a P-90 pickup on the bridge and a wrap-around bridge? And how to make this creation just that little bit better, more noble, more beautiful?

First of all a 15mm maple top on top of the mahogany! And then the pickup: 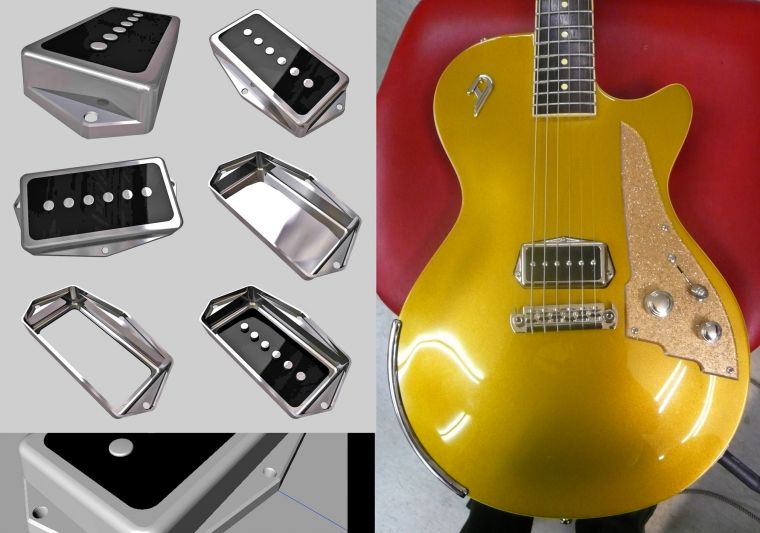 The surface of the pickup or pickup cap should be parallel to the strings for both optical and technical reasons. This can only be achieved if the body is fixed like a three-legged table. So we developed this new nickel silver housing, which fits an official P-90 coil, and which contains this third, central screw for angular inclination. In addition the coil body got an additional winding with tap, which could be activated by a 3-way switch.

And what do you call something like this, if you want to put the "Junior" one on top: Klaro, model "Senior"! 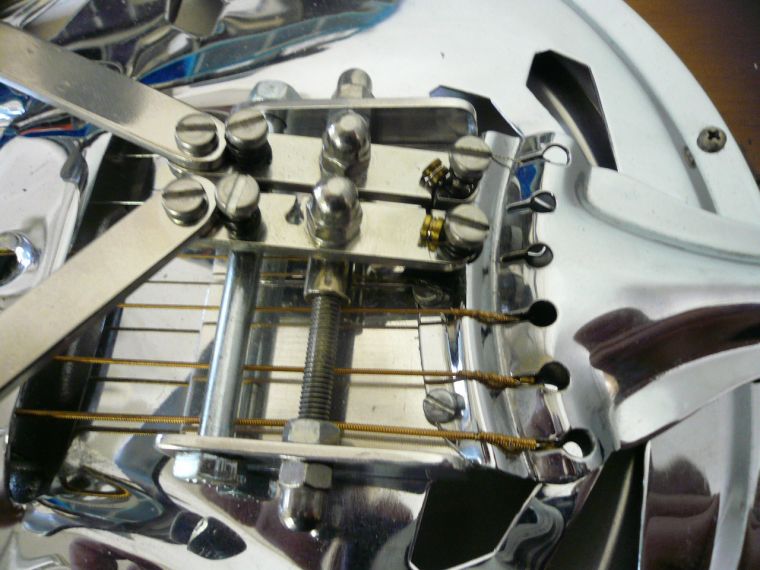 Dobro guitarists are also closely involved in the Bender technique. So what was missing? A "Multi-Bender" that could help as many Dobro models as possible. Martin and I made that clear. Not an easy project and also not feasible in the low price range ... But here you go! 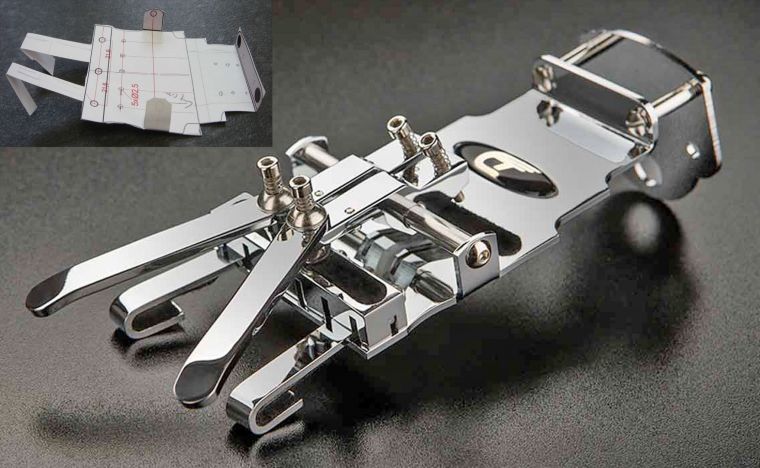 After long, desperate brooding I came across an interesting phenomenon in a "Self-Psycho-Analysis": Losses can be a spur - but this does not always have to be positive. Hopefully that doesn't sound too esoteric. And it is also not entirely serious. At the time of the Rockinger break I had to sell a part of my guitar collection. For example a blue-sparkle Goya (Hagström), a Hopf Saturn, a Dynacord Cora (frame made of chrome tubing). I especially regretted the loss of this Cora. It was not a really good guitar. But the idea of designing a chrome tube frame instead of a massive body was just so great and so flashy that I wanted to lift such a (but of course better) instrument out of creation myself. And preferably even in the shape of the old Hopf "Saturn"! 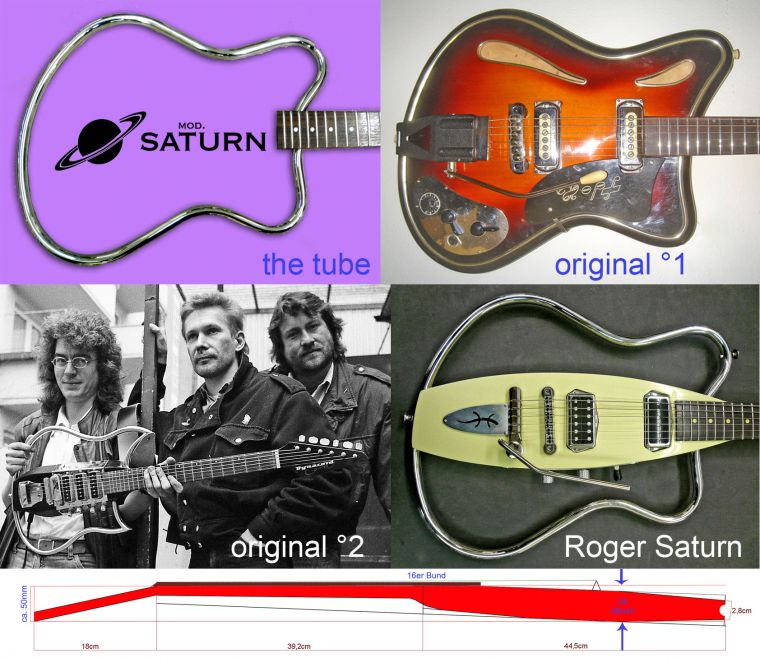 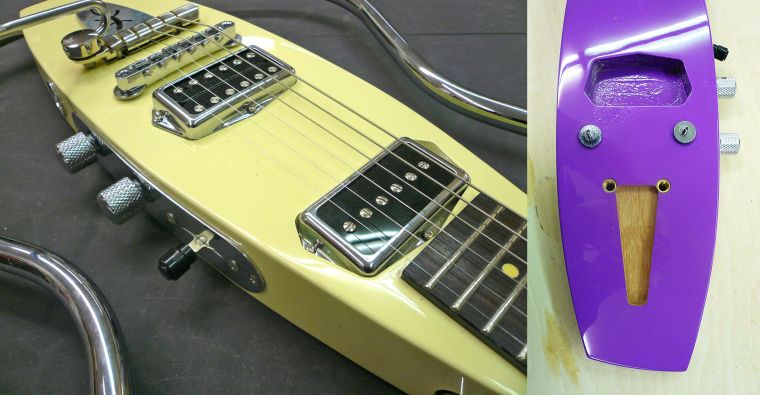 At some point I had found a company that offered this at a reasonable price. We then launched this "Saturn" under our "Roger" brand, which we founded some time ago. The neck and body were made of one piece of mahogany, the tube was screwed in the end pin position at the back and at the end of the fretboard it was inserted into the body from both sides and fixed with screws. Pickups & and controls = Duesenberg standard equipment, Vibromaster tremolo and everything at its best!

So? What happened? Nobody in Europe and the USA (except one Eric Bazillian - authoritative member of the "Hooters") - dared to play this ingenious guitar! Luckily" we were able to sell a large batch to Japan one year later. And our sales department there still reorders from time to time. Anyway (except Japan) big disappointment on my part!

A lot of flying between these two places, because the creative possibilities in Ines' loft were not sufficient for my doing. Shortly before the end of the year I came to a practical agreement with her. I agreed to take over most of the fixed costs of her loft and set up a workbench and all the necessary machinery at her place. I bought a kitchen unit and worktop "towards Ikea". In addition I bought all kinds of small tools from Hannover, a band saw, a crosscut saw, soldering stuff, a drill (brand "Flott"), a hand router etc. 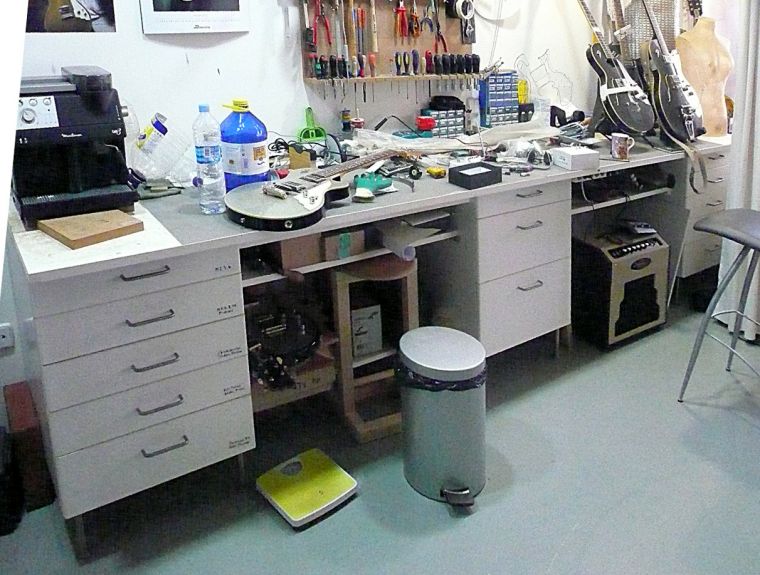 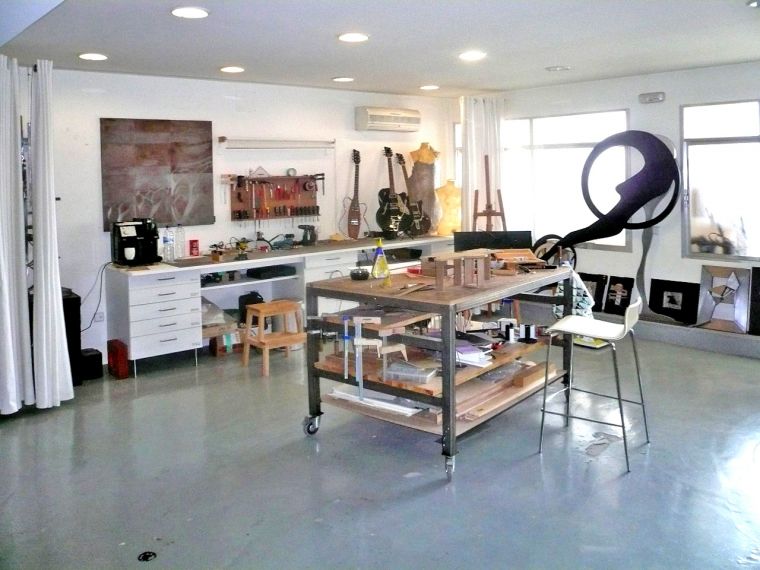 Yes. Sebastian had found a nice, large object to paint ...