Again a mild January week in Los Angeles. The weather is the good thing about L.A. and the entire show has a familiarity to it. You always meet the same people, shake hands and have fun - as much as possible - in the same places. And there are also guys like Daryl Jones, the Stones bass player, and his very likeable Tech Derek Phelbs, who I met last year in Madrid.

For Friday night Nathan had organized a session at Roscoe’s,  just around the corner from his place. I played five Doors songs and was accompanied by the best, including Peter Stroud (a great honor) and Chris Rodríguez, the Nashville guitarist and singer who has played with all kinds of greats (Vince Gill, Billy Joel, Keith Urban, Kenny Loggins, etc.)  Chris' specialty is singing the Loggins hit "Foot Loose" in a very powerful rendition.  We also used our new Julia guitar, named after my daughter. 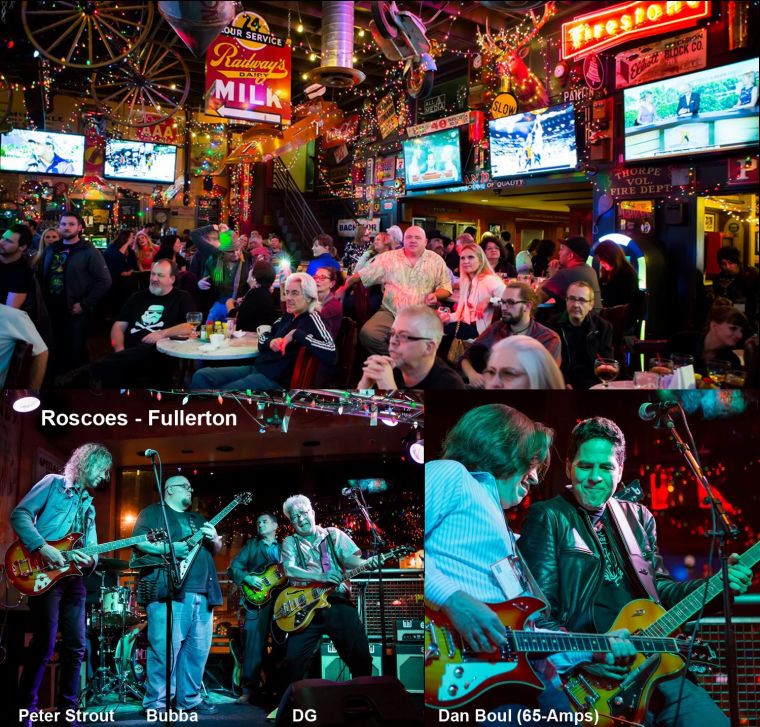 It was again a glorious concert in the college auditorium with Johnny Depp and the Hollywood Vampires. On the left is Felix, a good friend of Nathan’s and a very reliable security man, whom I have taken to heart, especially since he always reminds me of guys like Humphrey Bogart.

Abe Laboriel Jr., an incredibly powerful drummer. I have never experienced such energy before. And on top of that, he's a super likeable, hearty fellow. He played almost the whole evening. Here in the picture with his bandmate Brian Ray, one of the very first famous Duesenberg players (but Abe also has at least three of our guitars). 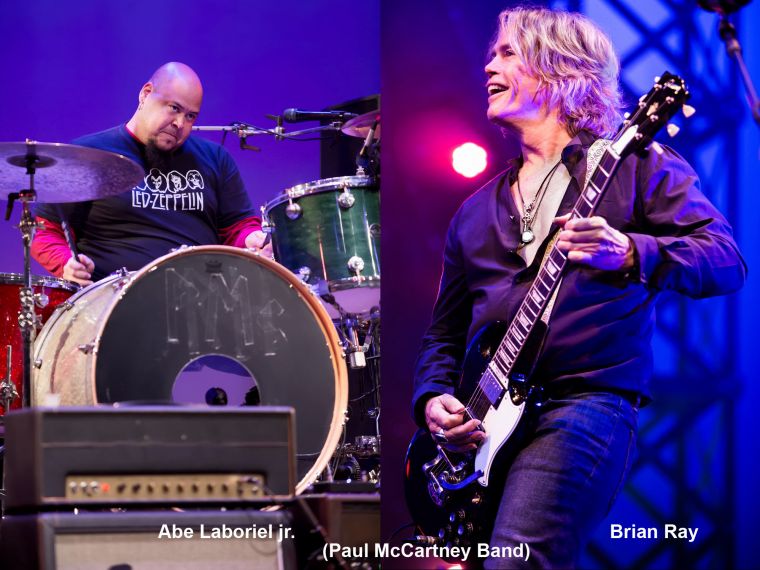 Johnny Depp was again extremely cool and tasteful, here seen with the "Planken" guitar. I've been his fan forever, more precisely since I saw him in the Jim Jarmusch movie "Dead Man" from 1995. This is really one of the best movies ever for me! And please note that Johnny is also singing now. He recently performed "Heroes" by David Bowie in a very charismatic way. See: https://www.youtube.com/watch?v=U8VnYZLWr_s

There were again various line-ups, among others with the daughter of bassist Bruce. Our new amp, however, was in constant use - and our new Rusty Steel design was well received.

By the way, the entire concert was recorded by the Sennheiser company using a new recording method.

And for the first time, our young Andrej L. was also with us, shooting Fotos together with Martin H.. 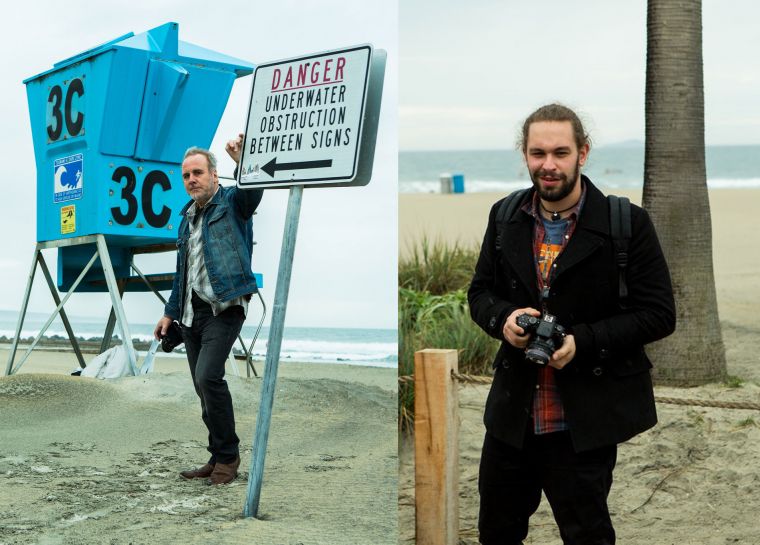 Even the crème de la crème of Spanish musicians have been well supplied with our instruments for quite some time. 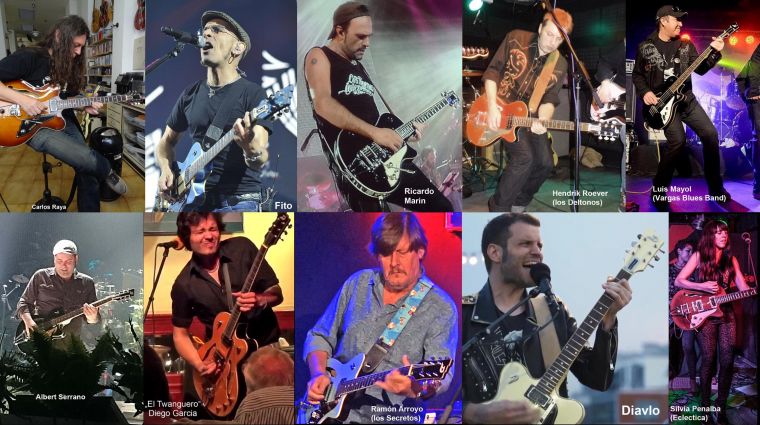 We had given two guitars to the Stones: one to auction off for charity and the other for us. This guitar was somehow lost and just didn't want to come back to Hannover. Several emails were exchanged with Pierre Debeaufort, who sent back monosyllabic, useless answers every time for months. "The guitar is in London." "Yes, okay, but where exactly, please?" Luckily, I had met Sally Wood at the Madrid concert, who appeared on stage during a vocal rehearsal for "You Can't Always Get What You Want" together with Ronnie. Ronnie, a real gentleman, had greeted Paloma, my girlfriend, right away with "Hello Paloma" and the left and right kisses that are common in Spain. (Ronnie has a residence in Barcelona and therefore has a certain experience of Spain). At least that's how I got to know Sally, which later proved to be fruitful.

For months afterward, the Outlaw still hadn't shown up, although I had emailed Pierre the exact delivery address and alternatively offered that one of us could pick up the guitar in London - if I knew where. My last hope was finally Chris Jagger, to whom I explained our dilemma. He immediately said: "I'm calling Sally Wood!"

No sooner said than done! In July I finally received an email from her, in which she first thanked me for the auction guitar, which after all had brought in £20,000. She also offered thanks for my ashtray initiative and asked just what kind of help I would need.

This was quickly explained and she immediately found out that the Outlaw had been safely stored in the Stones office in Chelsea for a long time.  Well, at last we find out! I wrote back that I would come by in person to pick up the instrument and she briefed the people in the office accordingly. 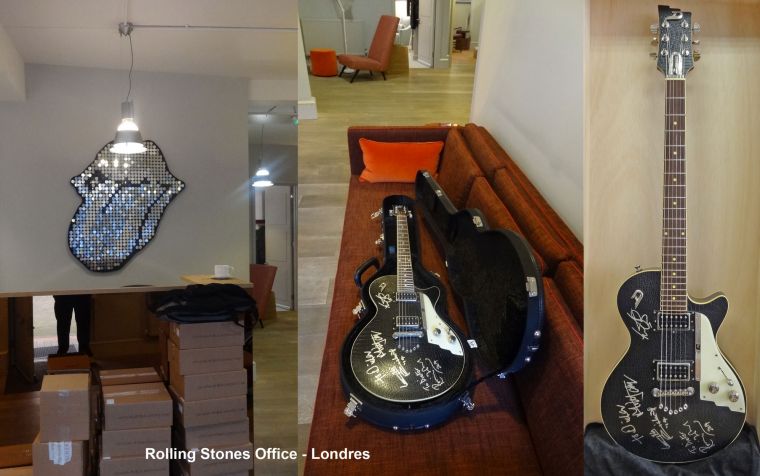 So I booked two return flights, one for me and one for the guitar, because I didn't want to check it as luggage. Because of the airfares, that wasn't even a luxury. So early in the morning I flew from Madrid to London Heathrow and from there traveled by train to Chelsea station and from there by cab to the sublime Stones office. I was warmly welcomed by a nice secretary, took a few photos, she generously got me a cab back to the station at the Stones cost and I disappeared with that valuable possession, safely tucked away in one of our excellent Duesenberg cases. And since the train to the airport didn't leave until an hour later, I celebrated the reunion with my guitar in a pub with a few drinks and English sausages with chips and ketchup.

At 7 pm I checked in. First there were problems with the stewardess: "You have to gate check your guitar!" "Wait, I have two tickets here. One for me and one for the guitar."  After a short consultation with the chief steward, she let me through with my guitar case and in the plane I strapped the guitar on the seat next to me. By the way, the two tickets were an idea of my already mentioned Swiss friend Kurt Scheidegger, who had flown out a Zemaitis guitar this way a long time ago. At night at half past eleven I was back in Madrid, everything was fine, but it had been a relatively difficult ordeal. 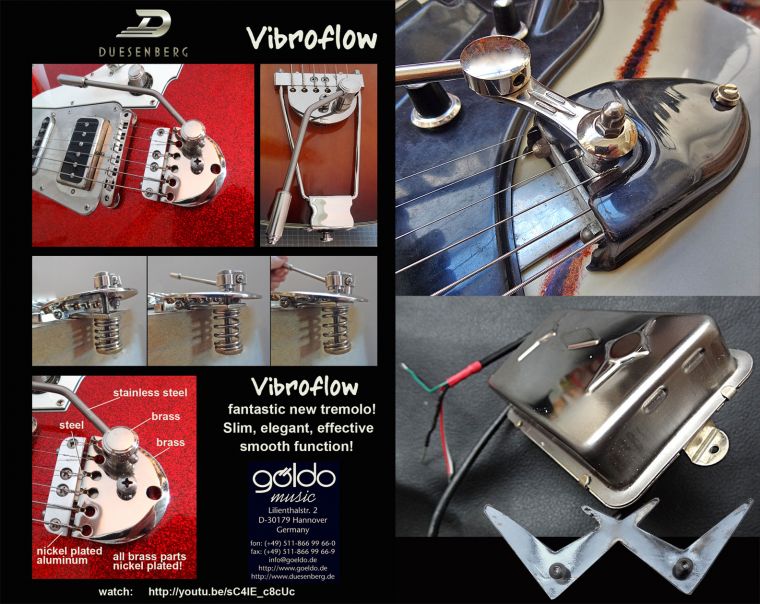 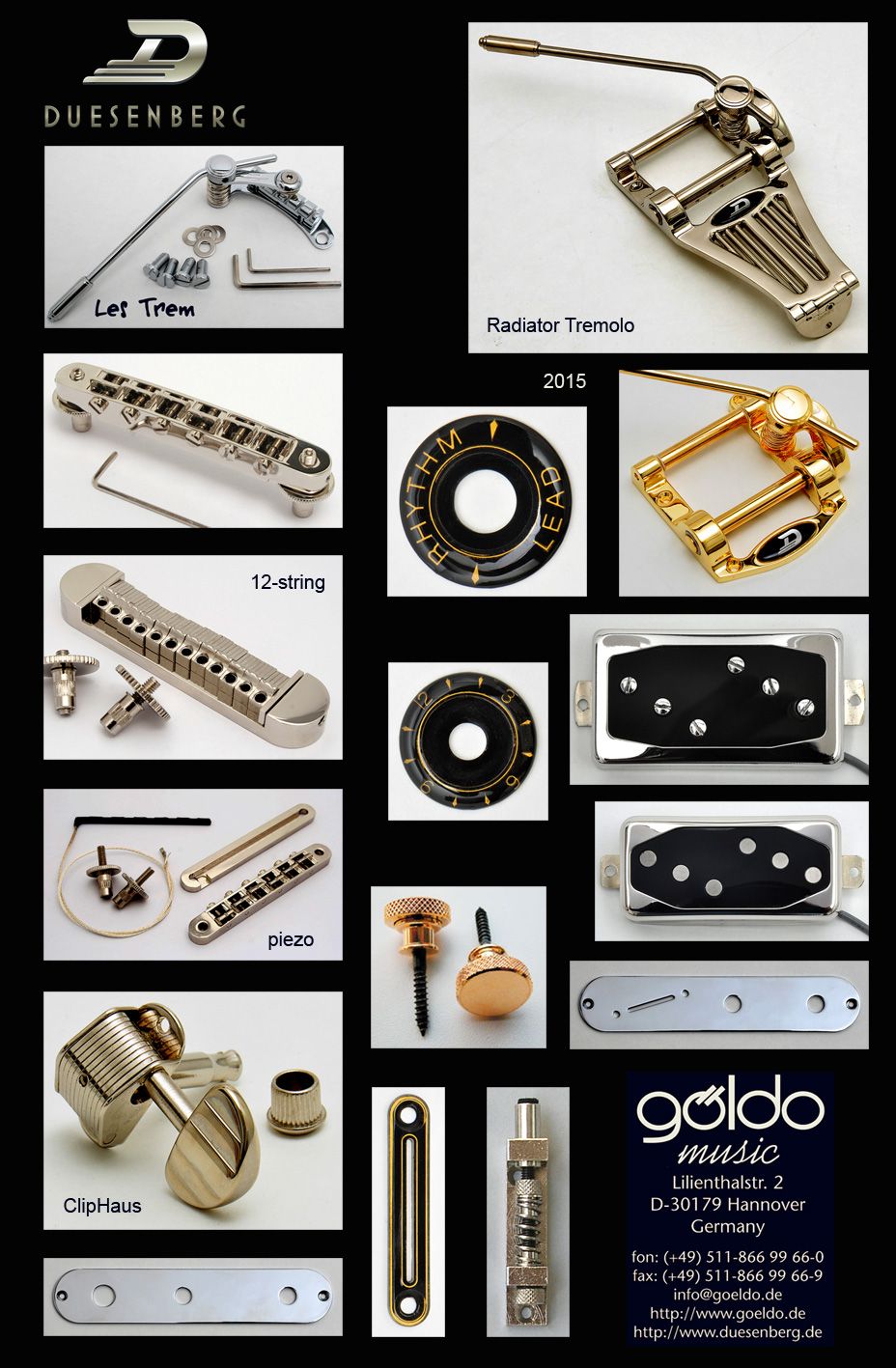 And finally, these reproductions of the Wandré / Davoli pickups were in the program. I could not stop following this crazy theme and developing products from it. High tool costs, ultimately low sales, but I just had to have it. And after all, the Johnny Depp pickup was born from this conical shape.  There was not only a true to the original version, but also one that looked just as original from above, but had a taller housing, in which you could wonderfully accommodate various inner workings: Humbucker, Single-Twins, P-90 etc. 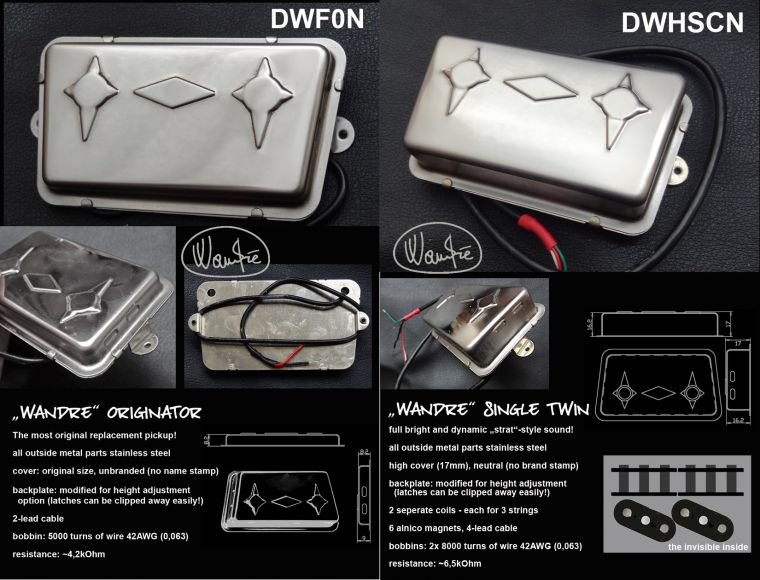 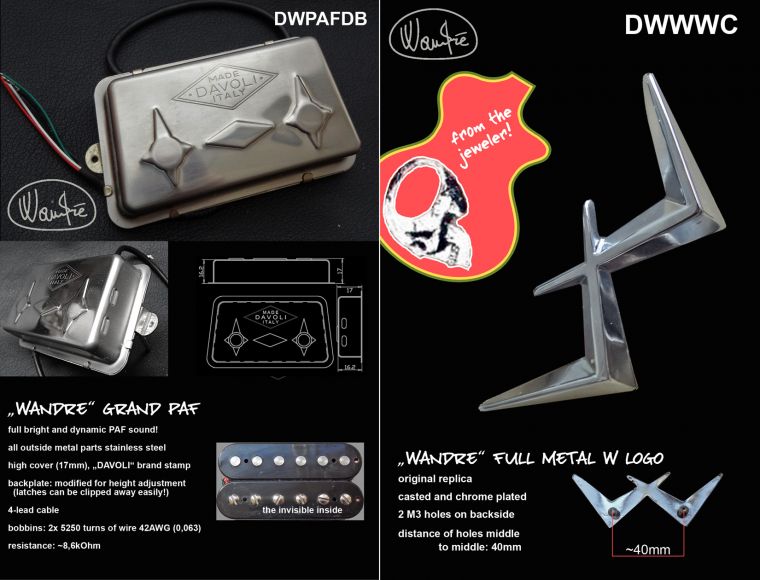 Here you may check the sound of these perfectly open sounding pickups: 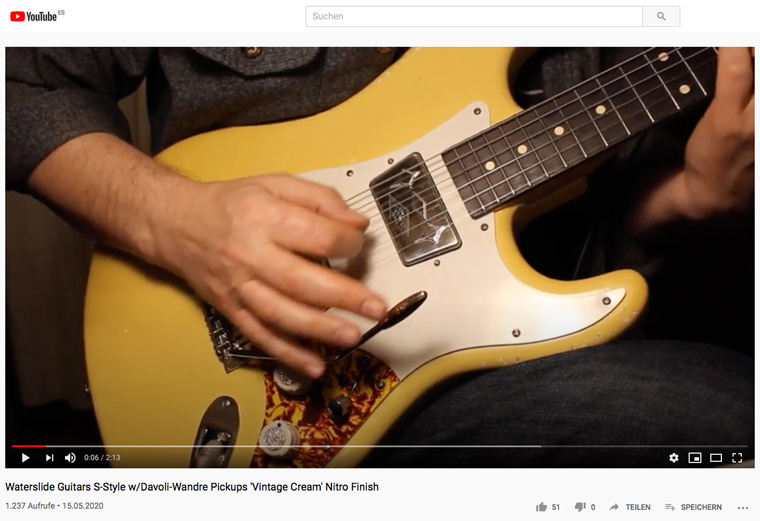 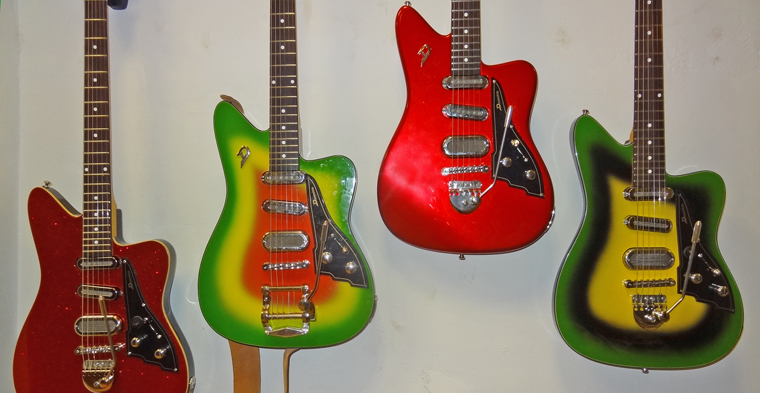 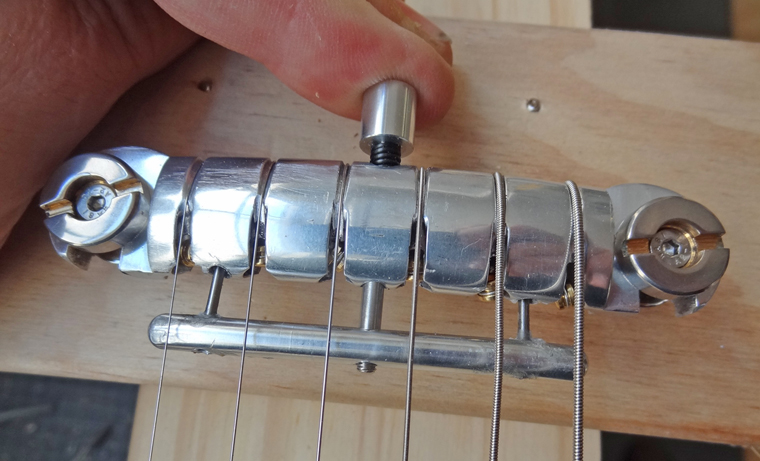 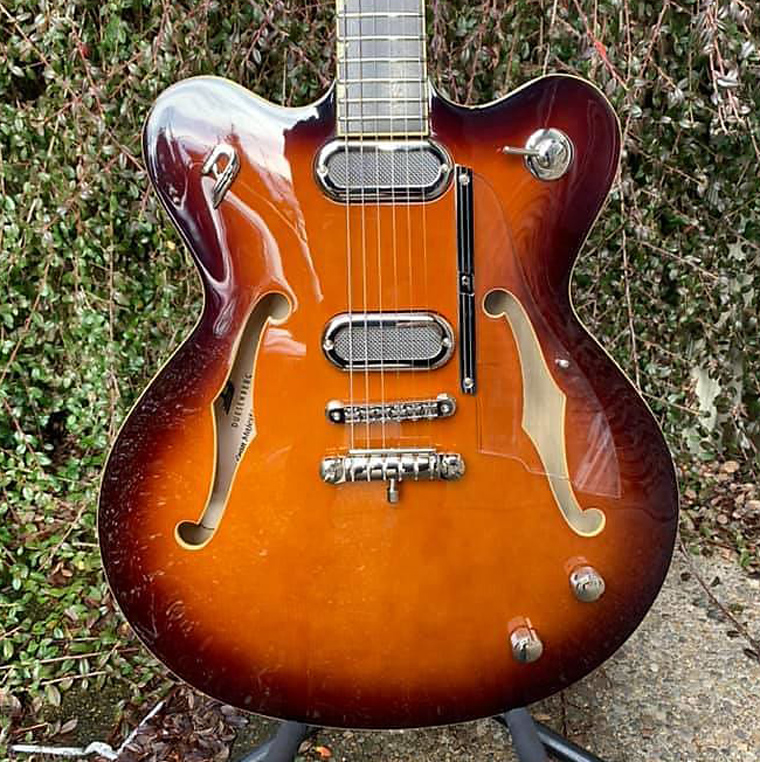 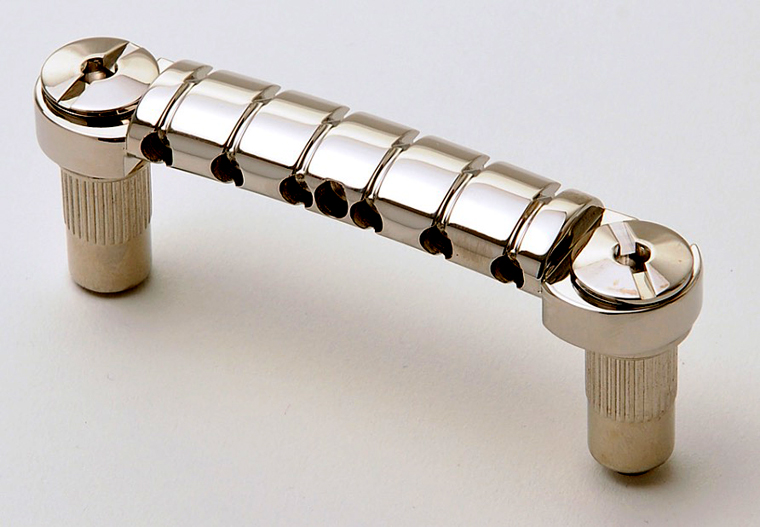 In May a beautiful quick trip to Italy, among other things in order to visit my Wandré friend Marco Ballestri. If you come via Genoa, it's worth visiting the Mercato Orientale, with an incredible range of fruit and vegetables. 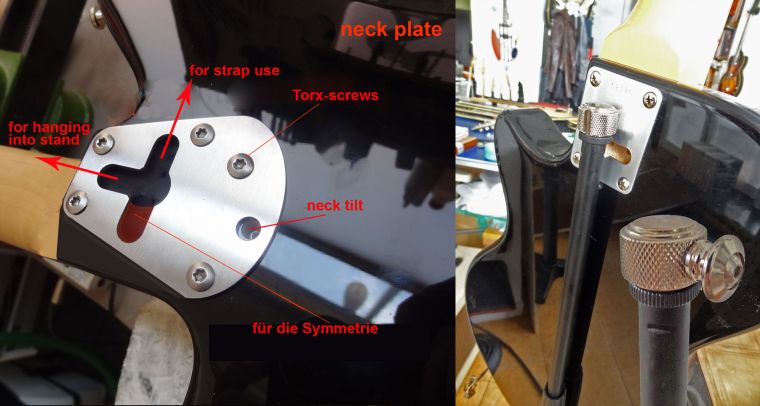 As a guitarist and singer, I thought it would be nice and crowd-pleasing if I could quickly put away my guitar and do a little show dancing on stage while our other guitarist, Javi, holds the fort. With a "normal" guitar strap this is not so easy, because you have to pull it over your head. So I thought of a strap like the one used on a saxophone: just a central suspension. For this purpose I constructed a new neck mounting plate which had a keyhole-like recess in the middle. There you could hang the strap pin, whereby a small groove had to be made in the wood underneath, so that the pin finds its place. In addition, a solid stand with a horizontal end pin to hang up the guitar there and immediately have freedom of movement. Unfortunately, it has also ended up in the garage for now ...

The cool thing about this bass is that it has three single twins in its oval caps, which you can connect in series for fat sounds by switching the middle pickup to the neck pickup and the bridge pickup.  The sliding saddles of the bridge can be locked sideways, which makes the construction "like one piece". 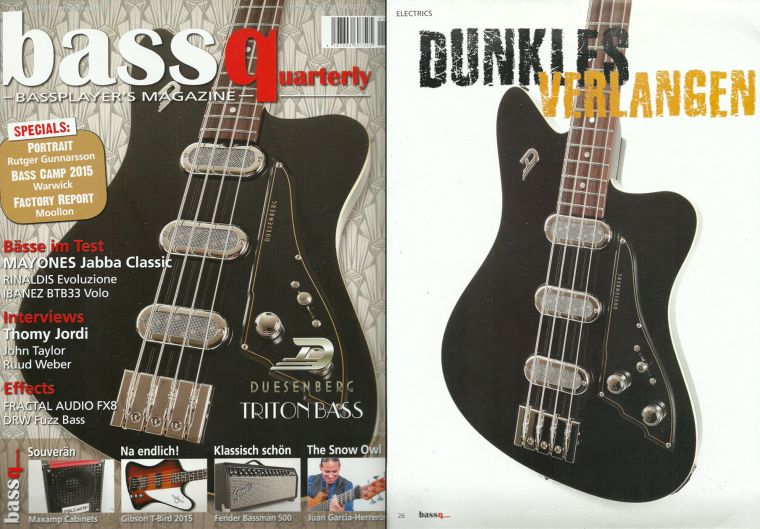 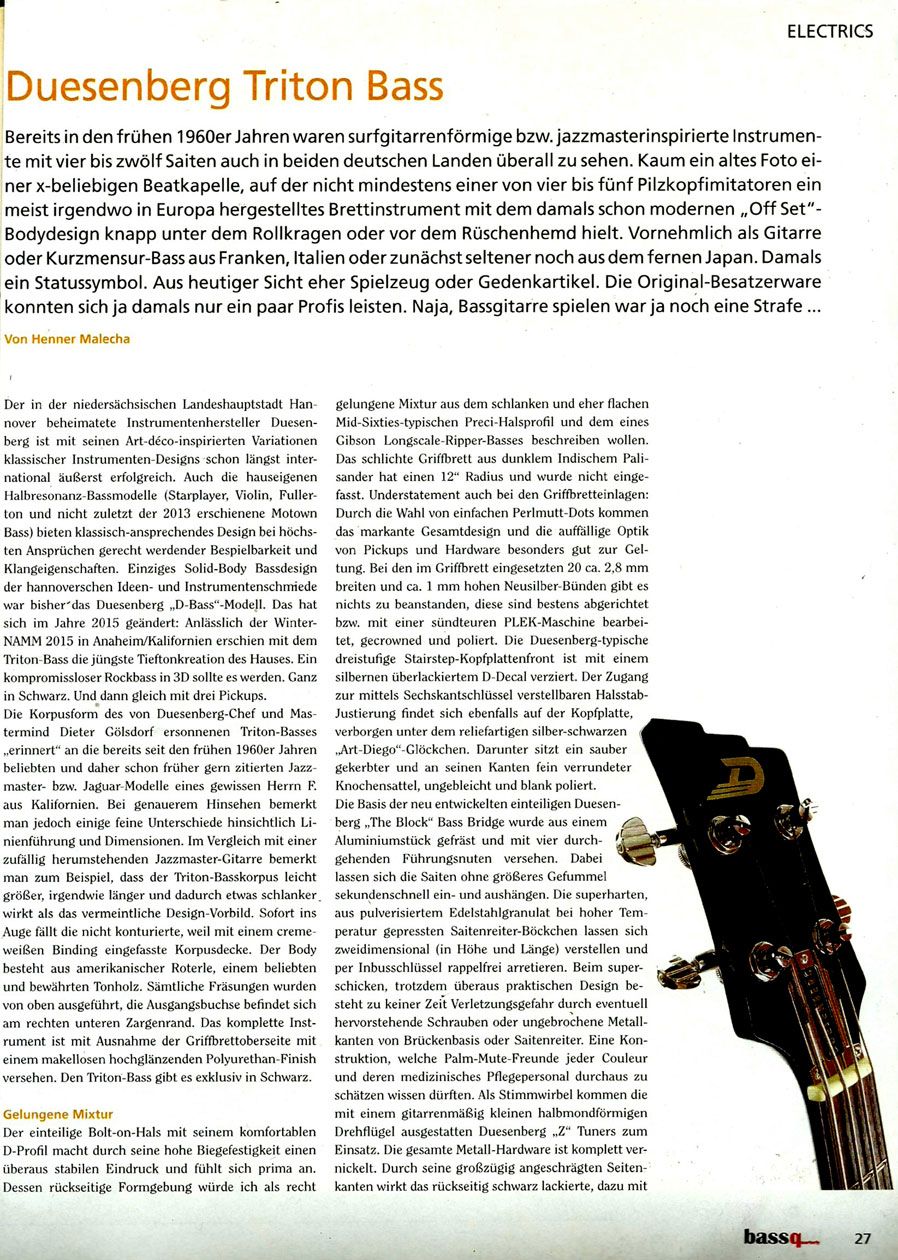 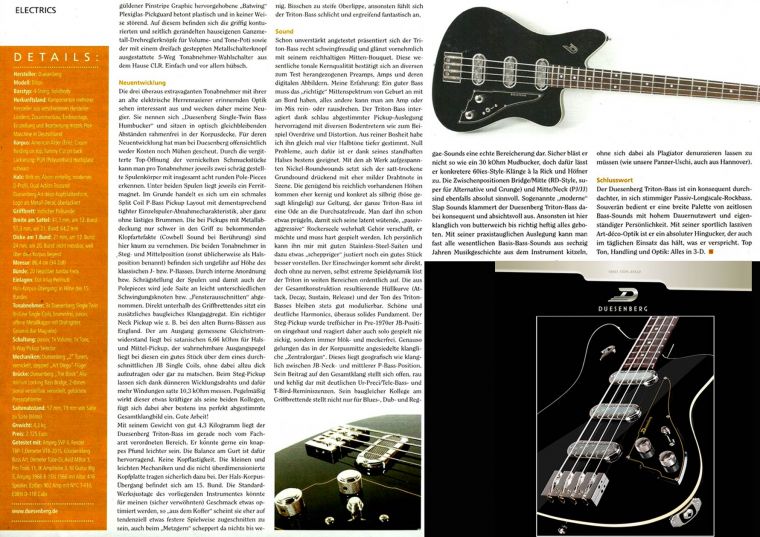 In Madrid I discovered a company that produced artificial illuminated signs in the 50’s look. We had these beautiful Duesenberg lamps made by them. I also had one of these gems installed in the Madrid Duesenberg store "Headbanger Guitars". There was also a nice presentation with los Dooros. Here with special guest Ramon Arroyo, guitarist of the well known Spanish band "Los Secretos". A brilliant musician, who always reminds me a little bit of Helge Schneider.


Meanwhile we had a new drummer, Hugo Enrique Pastor, and you can see and hear: Such a Roland electro-drums is not that bad. Here a little blues in my practice cabin!

a first class Spanish ham and the old controversy ... 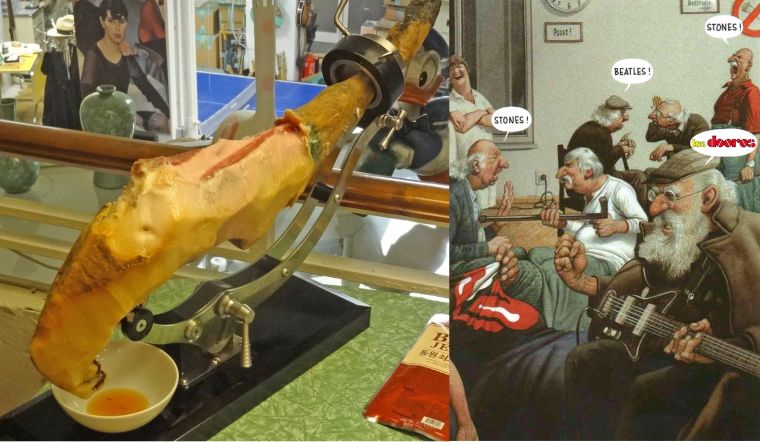 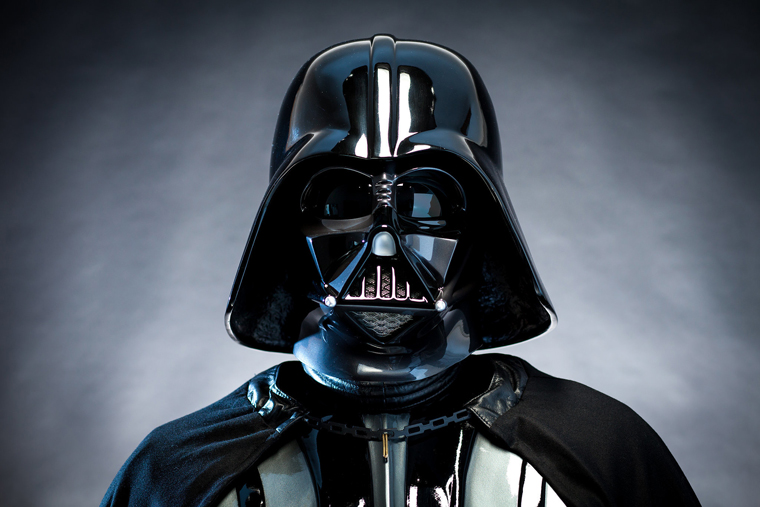 Since I am actually a fan of your make, I would like to take the liberty here to give you some food for thought.

First, kudos: over more than the last decade, you've brought super designs to fruition. Especially the large sedans and the 2-door cars are just picture perfect and absolutely elegant.

Second - the radiator grille - no praise: Also for more than 10 years I have been following your design development, because for me the radiator grille is something like "the face of the car". And what you have done there over the years is pretty disastrous!
a) Making the grille higher wasn't a bad idea, ultimately moving towards a more identifiable shape. However, placing the license plate in the middle of the grille was a design blunder of the first order. The license plate belongs underneath in any case!!! In addition, you have these wonderful 4 rings. One could bring them nevertheless still better to the validity!
b) And now you have changed the actually already quite pleasing and also quite better identifiable higher form, by installing two corners on the top left and right. This was the worst idea, because the grille now has something of a Darth Vader look - especially with the integrated license plate. Extremely ugly and inelegant!

Third: RS3 - for me an unserious design, in which currently all car manufacturers try. You as AUDI would have been better off leaving it alone.

Here on the right is my suggestion: 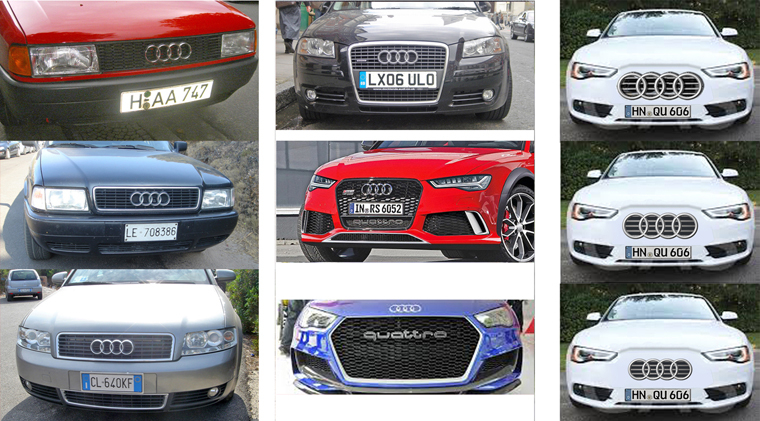 Very close to the Hyundai ...