It’s the absolutely fascinating capital of Spain. Madrid has only a small river to offer, but there is everything else: the most important museums, time-honored architecture, romantic alleys, lots of bars and restaurants, live clubs, incredibly accomplished musicians (the guitar is a tradition in Spain), various practice centers where you can rent a fully equipped room by the hour for little money (amps mostly from Hughes & Kettner). In addition, there are a lot of professional recording studios and even international film production companies (used for movies including Doctor Zhivago and films with Ava Gardner and Orson Wells). My favorite directors Alex de la Iglesia and Almodóvar also live here. Look out for the recent international success of the series "Haus des Geldes" (La Casa de Papel)! Despite all the things that we might think of as "Spanish", the Spanish are simply crazy about it. They can organize in a flash and find solutions to problems in no time. Besides, they are – different from most politicians and employers - the nicest people I know.

Many Germans know Barcelona the best, because that's where you go.  The city is right on the sea and the Sagrada Familia is a destination. But stupid stuff! Besides, the Catalans are annoying with their stupid independence efforts. It should be mentioned that the right wing is a mafia-like organization. Their top boss, Jordi Pujols, used to transport incredible amounts of money by military helicopter to Andorra.

After Tokyo, Madrid has the largest fish market in the world. This seems strange, since Madrid is located in the interior of the country. But it's like this: A considerable percentage of the Spanish fishing haul lands here first, well cooled and is then distributed all over the country. That's why you can buy everything that the sea has to offer in Madrid.  (You also appreciate this in the restaurants ...) 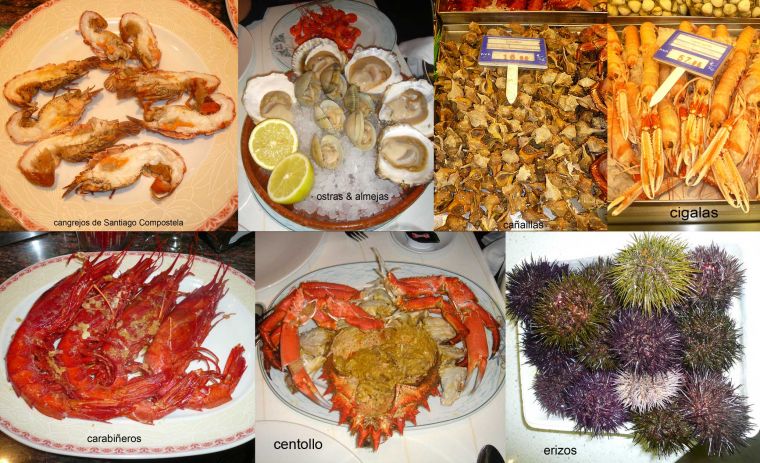 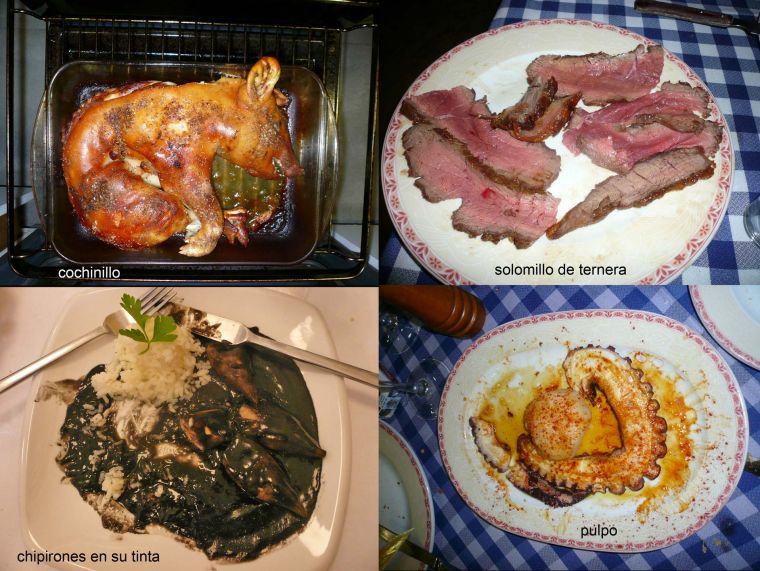 But now back to work and off to L.A.!

So, it takes three and a half hours from Madrid to Hanover, including changing planes in Munich (there are no direct flights to Hanover!), some preparation for the trade show and with Ingo and Martin on the plane to Los Angeles.
Alamo Inn, trade fair and the booth: everything as before. Our distributors stopped by daily, and some nice musicians did the honors. For example Buddy Miller (extremely adored by Martin), John Shanks (producer of Bon Jovi, Van Halen etc.), Carl Carlton (this time together with his son Max Buskoll), Keb Mo and many more. 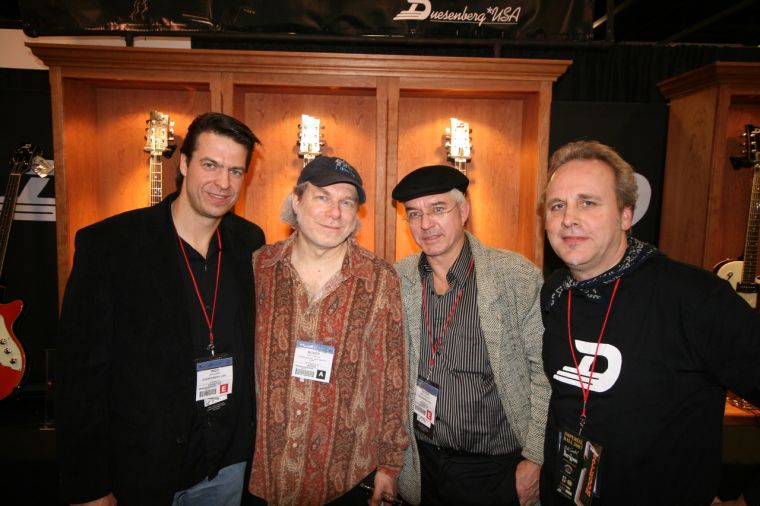 Mostly the usual, but Nathan had rented a "Ballroom" for Saturday night in Fullerton, a huge dance hall with wooden floor on the second floor of a building on the main street, not far from his office. In an adjoining room there was a Hollywood-based gallery: high-priced, limited edition signed prints of paintings by Ron Wood and his great friend Sebastian Krüger.

A certain, well loved Bubba, a Flying V fan and enthusiastic about our Rocket, opened the show. And Dieter was also allowed to play a few Doors-Songs. 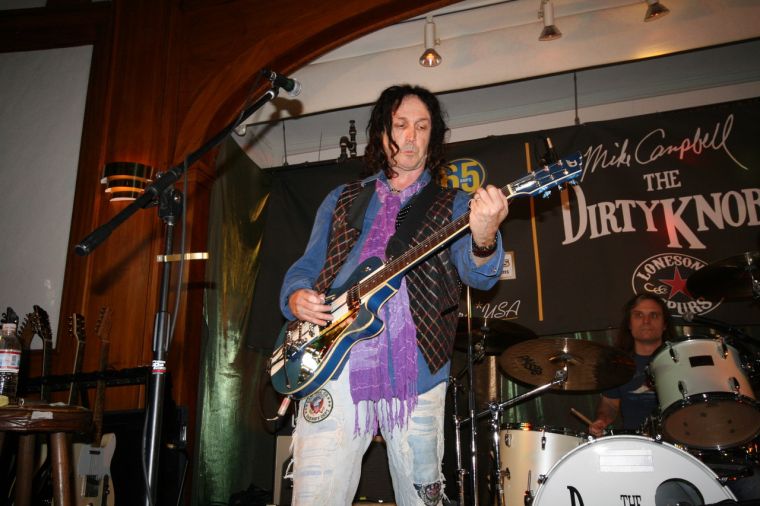 The "Dirty Knobs" are something like Mike's hobby band. They are all top-class musicians with whom he has fun when he is not playing with Tom Petty and singing himself.  They all have other jobs, e.g. Jason, the guitarist, is co-owner of a family business that produces and sells mineral water. He plays with Mike for fun. That's how they get together, the rich! In addition, Peter Stroud (guitarist with Sheryl Crow and fan of our Multi-Bender) and Brian Ray (Paul McCartney Band), who, as already mentioned, has owned Duesenbergs for many years.

And Mike is just an incredible guitarist, eminence grise of the guitar, technically very well versed. They play pieces from the Tom Petty repertoire and other covers. And, yes, he used "our" blue and white star players and the "Aligator-12-String"! As "special guest" Peter Stroud (Sheryl Crow) came on stage - with our Multi-Bender. Something like this can make you proud.

Then: the show dismantled and Wednesday back to Europe. In Munich I immediately changed planes to Madrid - back to Spain - to new developments. At the moment my French woman only had a big table, her existing machinery and a soldering iron. But I got down to work right away.


Shaping, notching and filing a nut perfectly is a considerable job in guitar building. The strings should run as close as possible over the first fret without touching it. A zero fret is absolutely unsuitable for this purpose - as already mentioned before - especially since it also represents another point of friction, which often leads to detuning when tremolo is played. Idea: the nut should not be mounted behind the fretboard, but on top of it. GraphTech was able to have something like this cast from their high-quality plastic. The nut is completely flat, with six notches of optimal depth and two small pins underneath that fit into the Fender-like fingerboard slot. The nut must of course overlap this slot, so I provided six tiny recesses on the front edge in front of the notches, which end practically flush with the front of the slot - so the fit is perfect at this point!

We contacted GraphTech to see if they could make this for us. "No problem!" was the answer. You have to bear in mind that this is an extremely delicate and expensive project, because everything has to fit on the hundredth of a millimeter. The saddle mold is split into a two-piece steel block into which the liquid plastic is then pressed under high pressure. 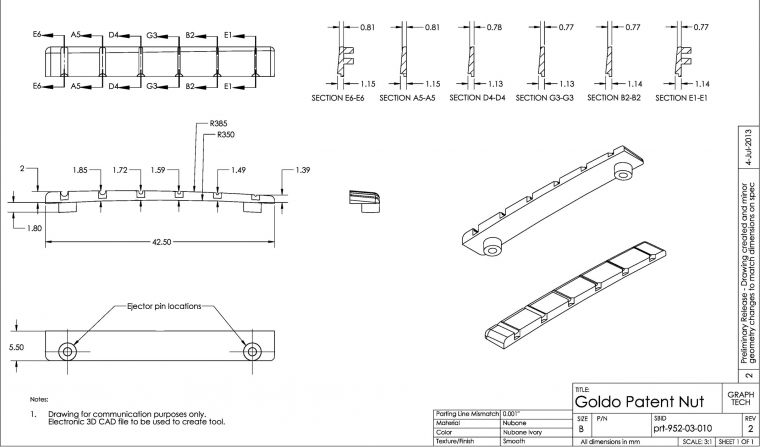 But there was a problem: the dimensions were not correct. The mold had to be reworked several times. Finally, after months, the result was acceptable and we received a huge amount of nuts ... but their color was just too greenish.

Following our complaints; we got new ones in a more creamy color. In principle, everything worked, but our luthiers just couldn't get used to it visually. Besides, problems with the assembly = reworking = frustration = capitulation = money burned = a new candidate for the garage of discarded inventions. I wanted to do my best and save the guys a lot of work, but the project just failed due to technical shortcomings, oh well! 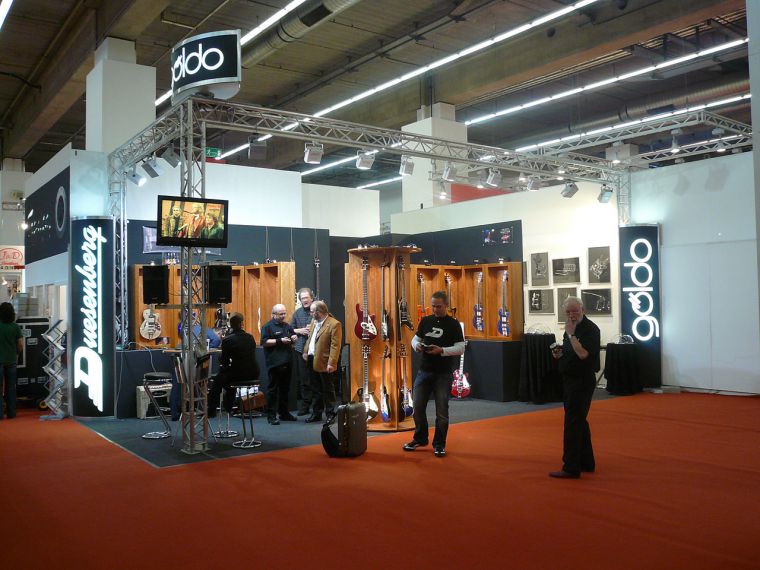 In between again this annoyance. But at least by chance we had a new booth with a very generous space in front of it. Otherwise: the usual.

I owned both an old, red Framus and a Hofner solidbody, each with a "violin sound" or let's call it a "swell pot" on its chrome pickguard. You can use this violin swell effect with a Stratocaster by placing your little finger around the volume pot while striking the note and then letting the sound come. The Framus potentiometer worked the wrong way round for my taste, but I found the idea of the integrated return spring, which brings the potentiometer back into full swing when released, quite fascinating. But the control travel was much too long for that - in the end everything was unsuitable! 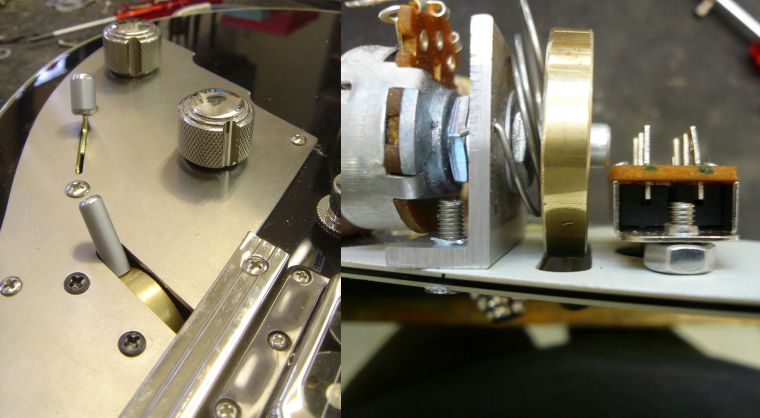 But our Push-Poti was the solution: Switch ON = Volume OFF! But there was still the problem of the control travel. So I asked our Japanese supplier, from whom we have always received these excellent potentiometers, which are far superior to those of the Americans in terms of reliability and operation, whether he could make us a potentiometer with 70° control travel. Yes! Order >> göldo "Speed-Pots"! 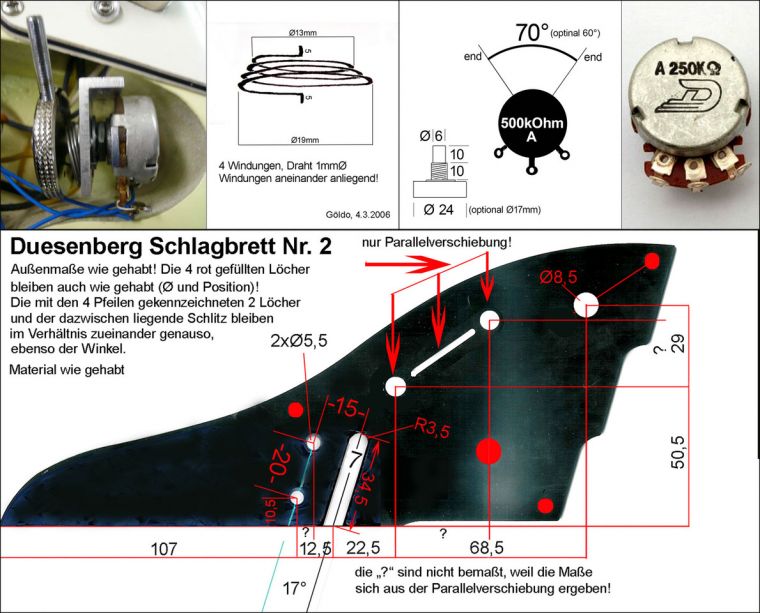 I milled the pickguards myself - I learned this from Chandler! 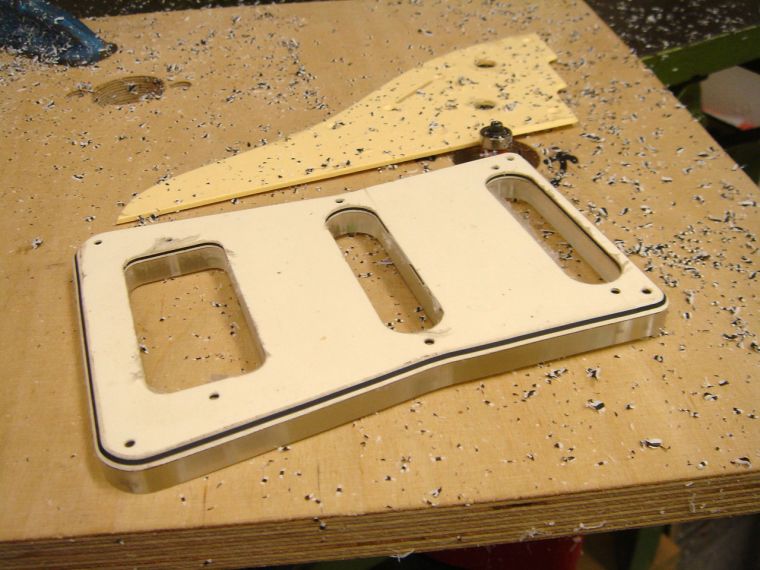 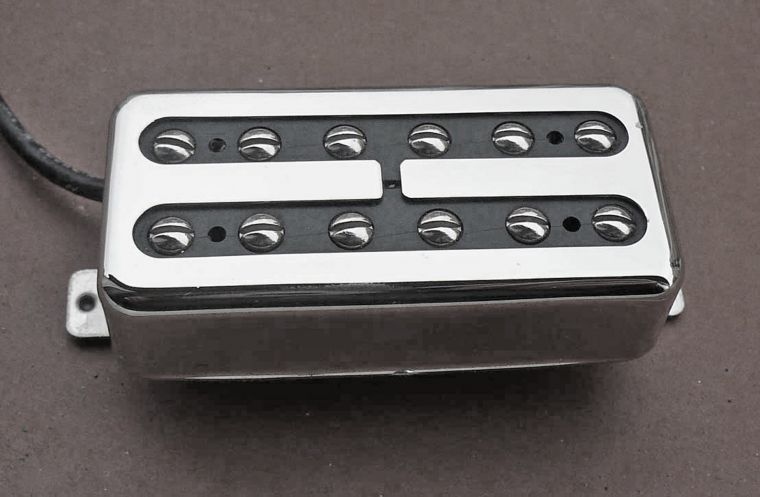 Mini humbucker: An adaptation of the Gretsch design, but much smaller, practically the dimensions of a Hofner pickup. They sound nice and open with low compression, yet look really chic. This was a not a trivial investment for punching and drawing tools. Bottom plate, pickup cap, coil body etc. 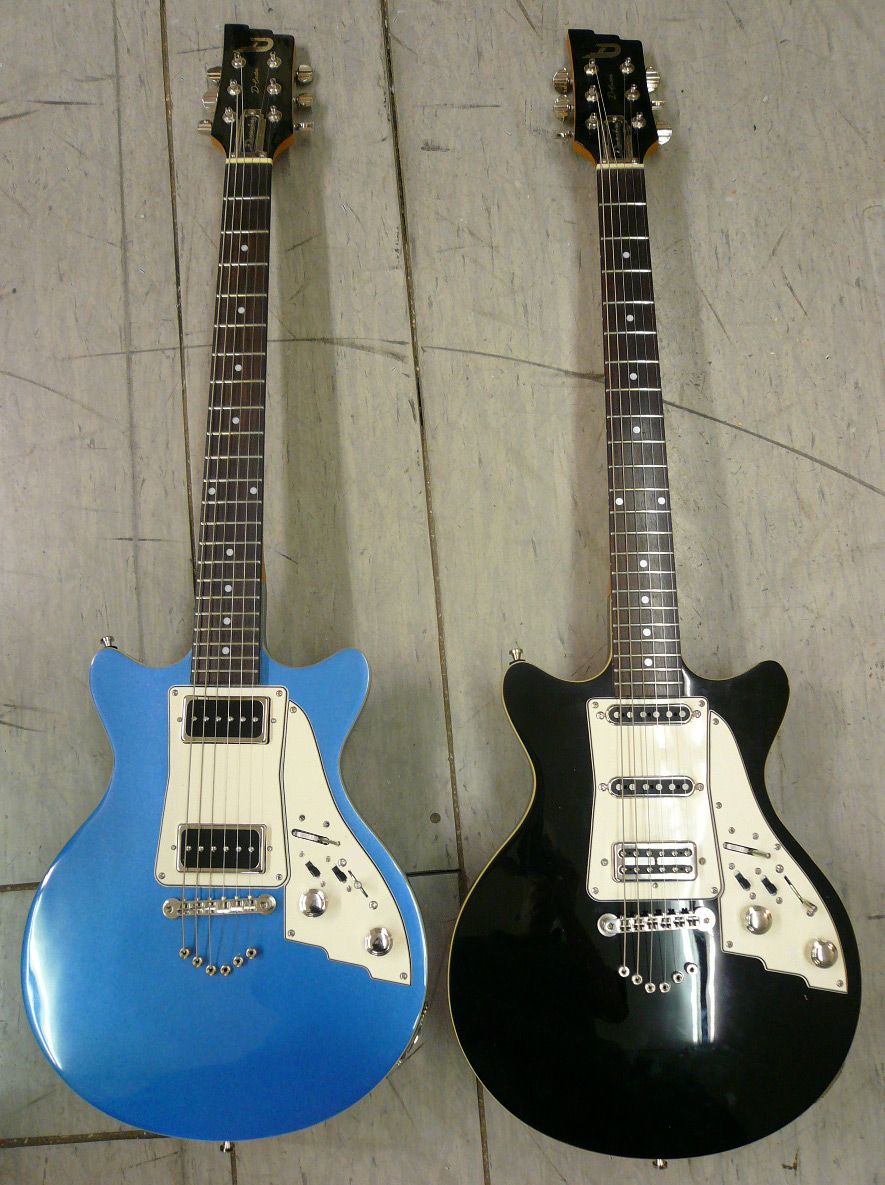 The failure of the V-Caster disappointed me, but I did not give up. A "D-Caster" (Dieter-Caster) had to come. Let's make a double cutaway design with a not too thick body. And this time all pickups in conventional size bodies! And of course THE opportunity to use my "Sweller". There were some development phases, which could also be called "the wandering of the slide switches". 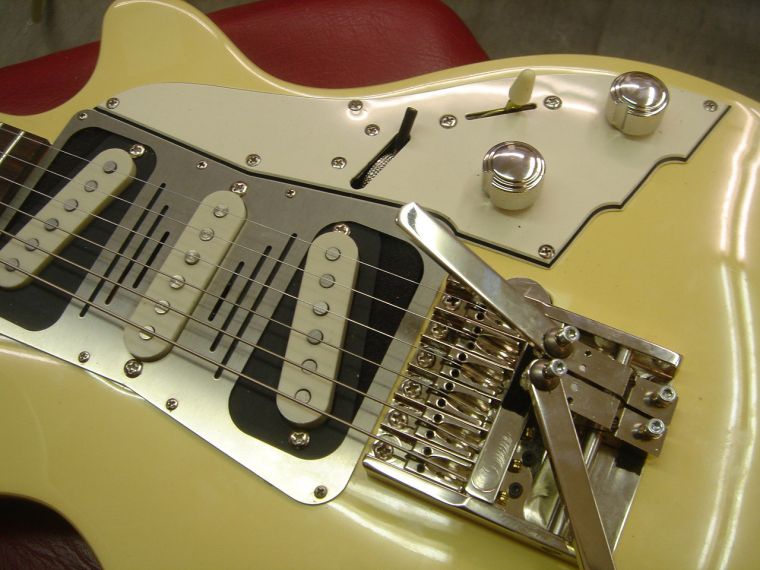 And this because it was possible to switch the swell switch on or off, since the return spring is supposed to cause the potentiometer to be at zero when activated. If you pull the small lever upwards, the volume swells. So give me a small slide switch! Then I had the idea that the 70° speed pot could also work as a tone control for a slight wah-wah effect. So here is another slide switch for this function. Above a version without slide switch. 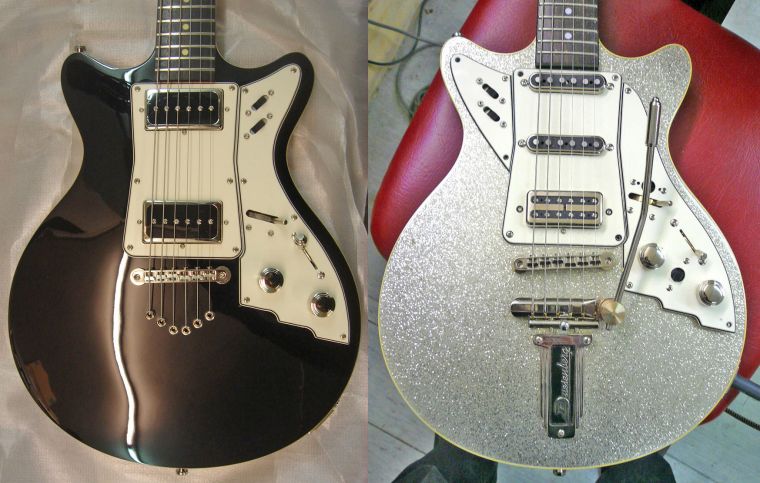 Here we see one of the last two versions that went into series production. We didn't use the leaf spring tremolo on the right with the nice cover. 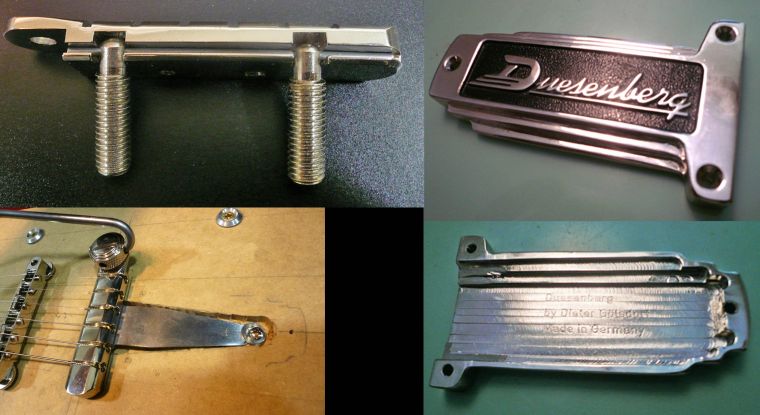 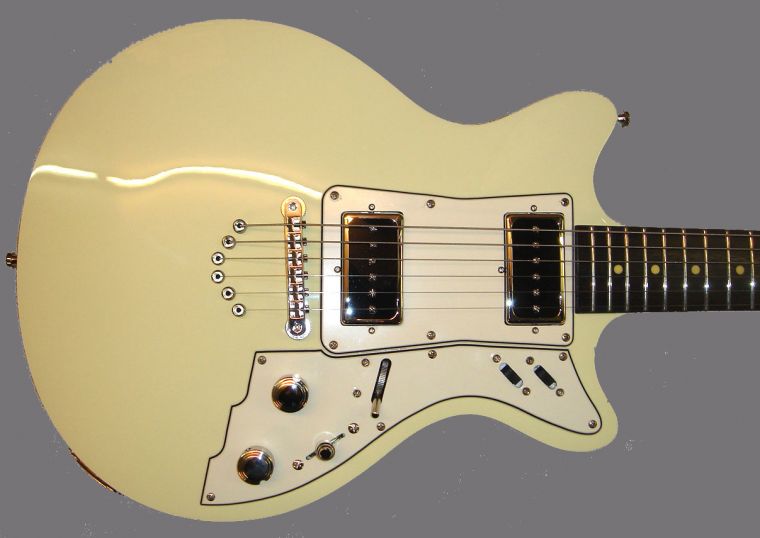 Peter Stroud still plays his multi-bender equipped D-Caster today. But this "Swell-Pot" technique did not have the desired success, because guitarists are unfortunately rarely open to new things. But we soon used these speed pots as "fast tone controls". Because, who needs a tone pot with this conventional, endless control path? Yes, 70° and the highs are trimmed! 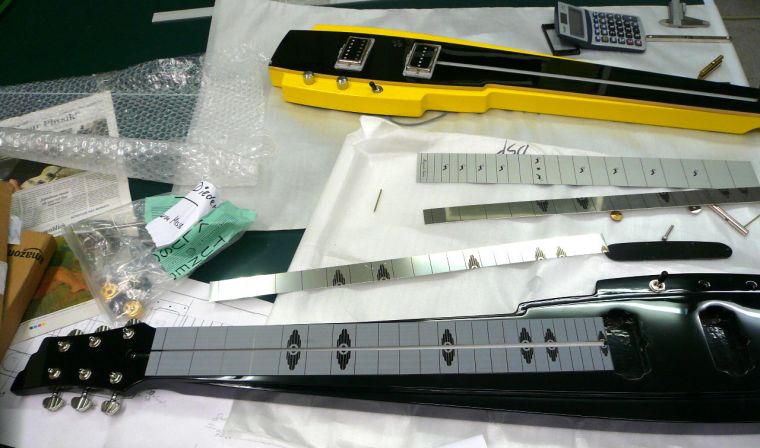 We had the Multi-Bender. And we had Martin. The wily fox finally suggested to develop a lap steel guitar with this technique. I, always flying between Madrid and Hanover, welcomed it enthusiastically and we sat down together. Martin had already prepared a conclusive overall design. 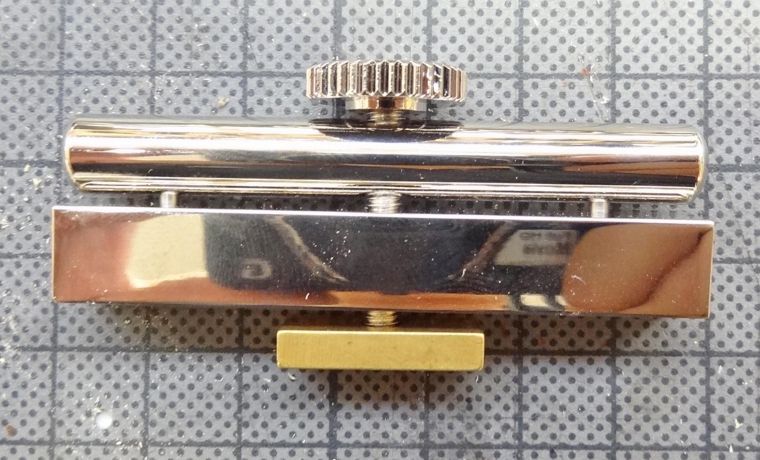 Martin came up with his 15 year old, until then unrealized idea: namely that it would be downright revolutionary to have a movable capo on the fingerboard of a lap steel for different tunings. Martin Huch is obsessive and there is nothing that cannot be put into practice!  But a lap steel has this chunky neck, and to "wrap" something like a traditional capo around it would not be the last word on wisdom. So first a groove was milled into the "fingerboard", two aluminum rails were fixed with screws on both sides, and a capo was constructed, which could be moved in this groove and fixed with a so-called groove stone. All this turned out to be rather unwieldy, so that some time later we had a massive aluminum block milled. Minimum quantity for this material: half a ton = about 840 pieces! At the bottom of the groove we also had to drill attachment holes. All fretboards had to be anodized in black, so that you could engrave fretboard "inlays" into the black surface by laser - additional, considerable costs. We ordered this anyway, fearful that we would never be able to use it up. But in the following years the opposite happened. And it was to take several months of the coming year until it was delivered ... 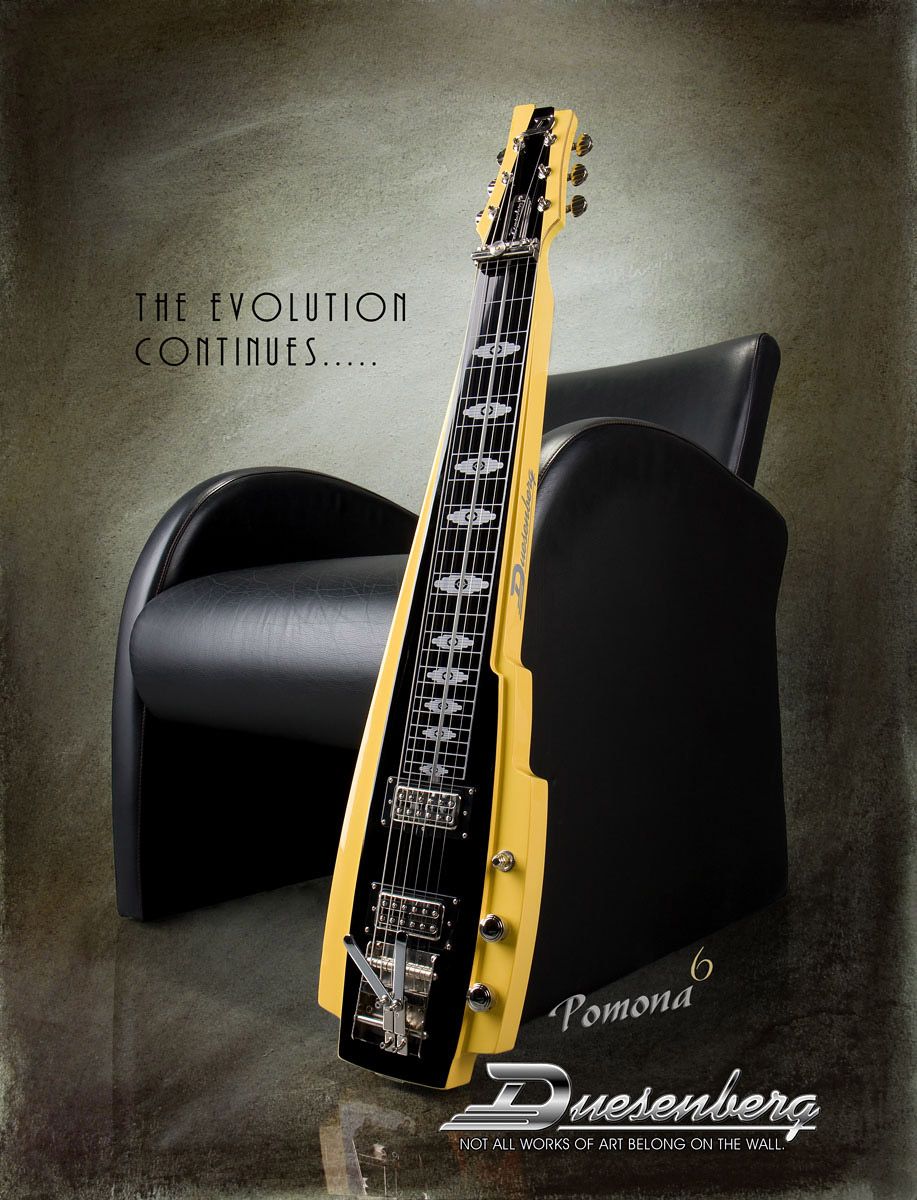 And again to Madrid. Here our two "office" places, framed by French art. Two computers, get up in the morning, coffee, cigarettes and check emails ... 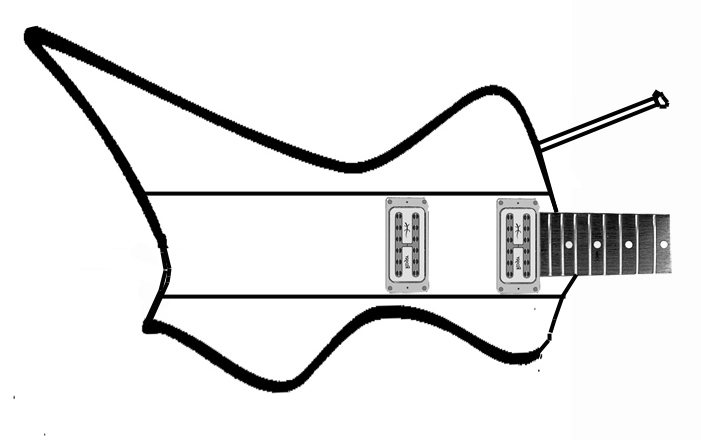