Just about everything was as in previous years.  Nathan had finally mounted our 3-Step-Headstock-Emblems over the guitar showcases. That was a real step forward, especially since our headstock really has recognition value. 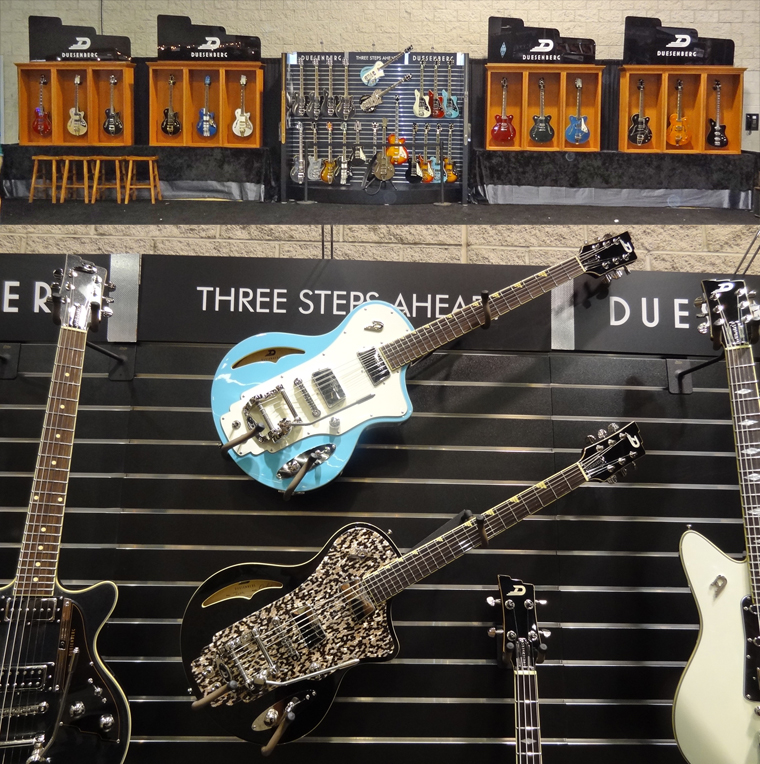 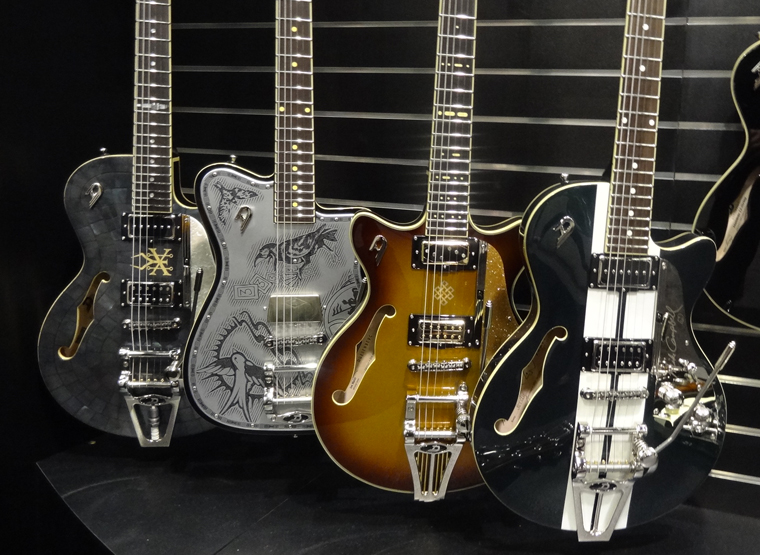 Yes, for the first time we had our own GÖLDO booth 30 meters away from the Duesenberg booth to make our guitar parts accessible to the world.  To the left and right we had two gigantic tremolo models as a visual catch, the "Neutrola" and the Les Trem. Here you can see Hup Keffner, the former agent of EMG and Steinberger visiting.

I had procured a few relatively inexpensive copies of well-known instruments and mounted our most important parts on them for demonstration purposes. On the headstock a göldo emblem, which covered the manufacturer's logo underneath. And in addition a chic trussrod cover with three lasered-through "grooves". 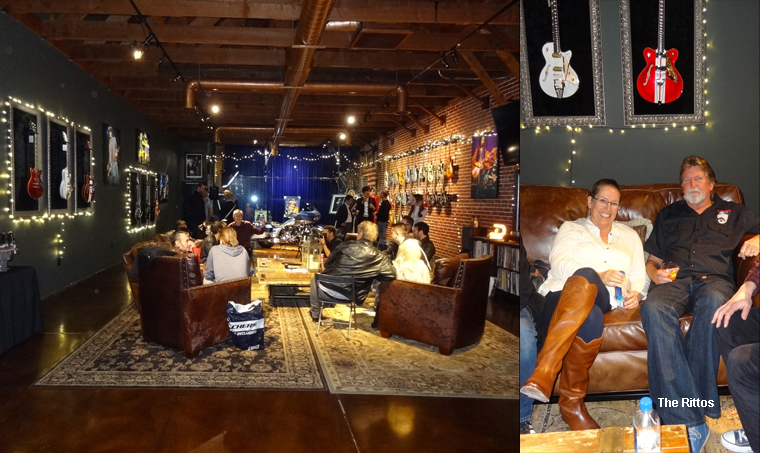 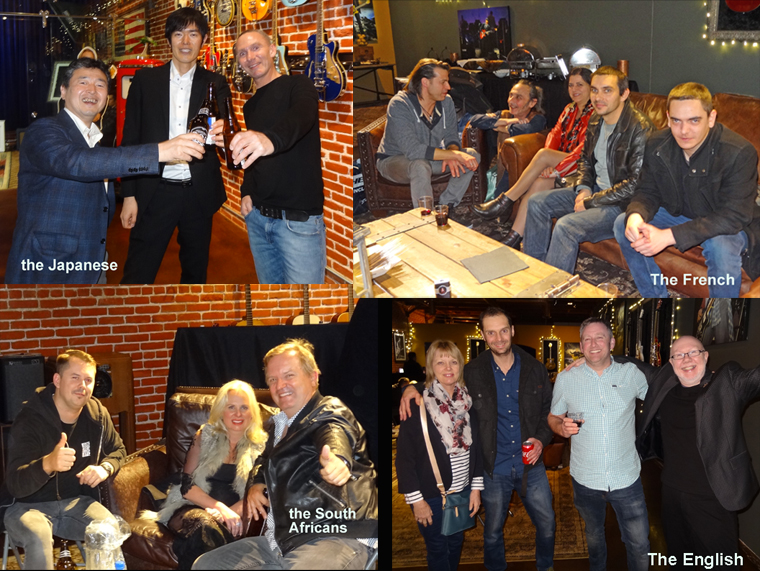 Oh how nice to smoke a joint with Johnny in his dressing room. I was pretty blown away as a non-smoker. In California the dope is legalized and they have breeds with an enormous THC content. Everything was spinning! But then here to the group photo Dieter in Johnny's arm! 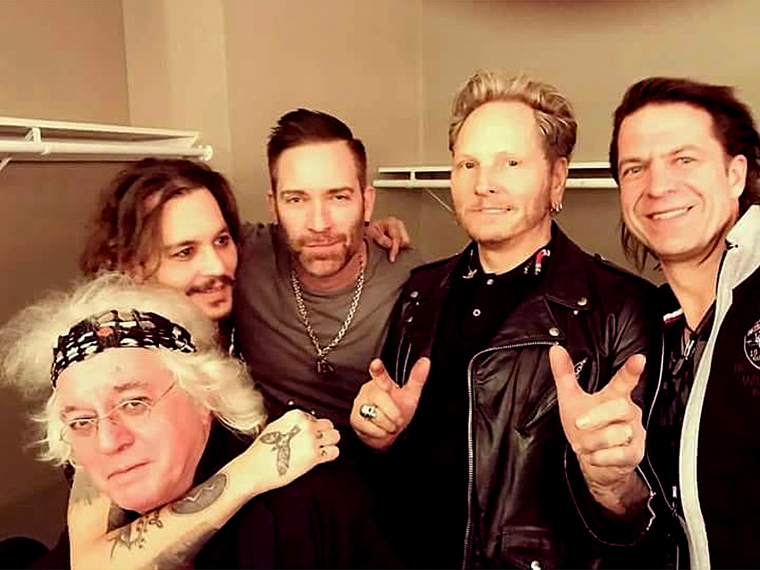 Photo from a NAMM back exit. Far in the back you can see the Disneyland, which I haven't entered until today and never will! 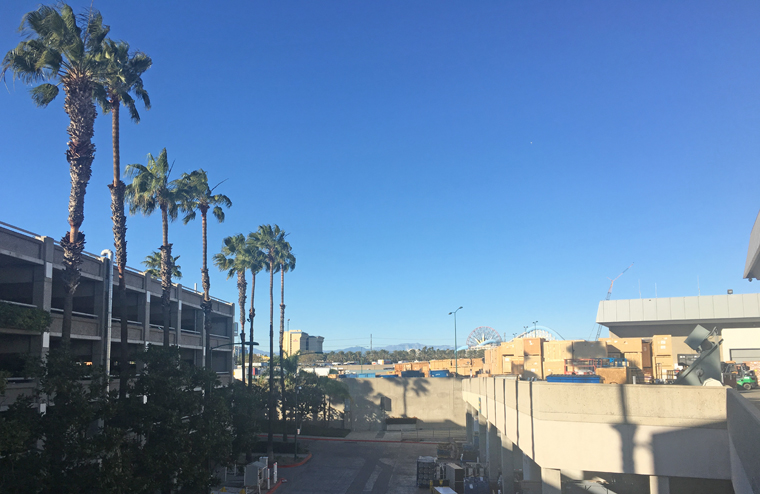 Working title for this short scale, which took a long time to finally go into production.

Here, as always, a lot of contact with the official, Spanish guitarreros. Jairo plays with Calexico, Paco Simon is acknowledged as probably the best blues guitarist in Spain, and Ricardo Marin plays with Raimundo and other greats.

The damned health and the landlords ...

During my annual health check my carotid artery turned out to be narrowed, shit! So I had a stent put in, a surgery that is practically unnoticeable, even though they put a finger-thick tube into your vein from the groin, which looks like the body of a glow-worm. But then everything was fine. To top it off, my landlord told me that he and his six brothers and sisters wanted to sell the building my shop was in to free up the capital. I could stay in it, but with the low rent I had negotiated at the time of the Spanish crisis, it was unlikely to stay that way. The rent wasn't that low, but in Madrid there had been a real estate boom in the years before and it went down afterwards. As I heard at the time, my shop stood empty for several years until I moved in and, as a good tenant, made my monthly payments.

Well, Cádiz was the place to be anyway. Besides, at the end of the previous year, I had put my apartment in Hannover's Südstadt up for sale. I could sell it for twice what I had paid for it. I don't want to mention the selling price here, but by Spanish standards it was enormous, so that I was able to buy an apartment at the Plaza II de Mayo in Madrid's most relaxed district Malasaña (student quarter with many bars etc.). This apartment on the second floor has about 70 square meters and consisted of nine rooms! Walls torn down, everything new, about three quarters of a year of renovation work. 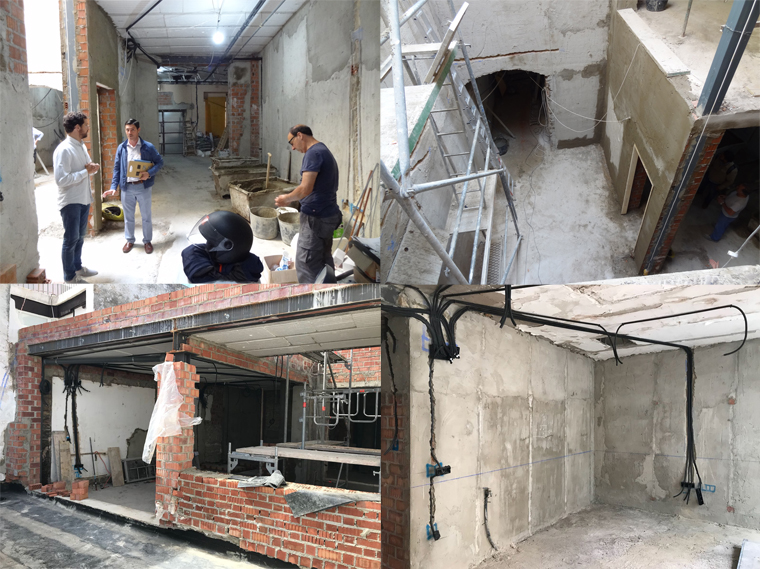 Everything went ahead with the renovation and conversion work, albeit slowly. The entire roof had to be covered, as well as the ceiling of the basement - my future workshop. The wooden beams were rotten and no longer repairable. So they pulled in steel beams in between concrete slabs. Meanwhile, we lived in the Wyoming house in Zahara de los Atunes or in Raimundo's terraced house or in an apartment in Calle Ancha ("Wide Street") in Cádiz, so that we could at least inspect the work now and then.

Cádiz is - I think - the best little town in the world, but it has one negative point: Every two days up to four cruise ships dock here, from which thousands of ugly and fat northern tourists pour into the center, most of them in shorts and flip-flops. They hardly reach the place where we had our house under construction, but it is quite an imposition! And these "Cruceros" are higher than most of the houses here. You look through an alley towards the harbor, and there this monster of a ship rises above everything.

I did not know this band at all. But they seem to be very big in business. So Ingo had dedicated a "Special Edition" to them. 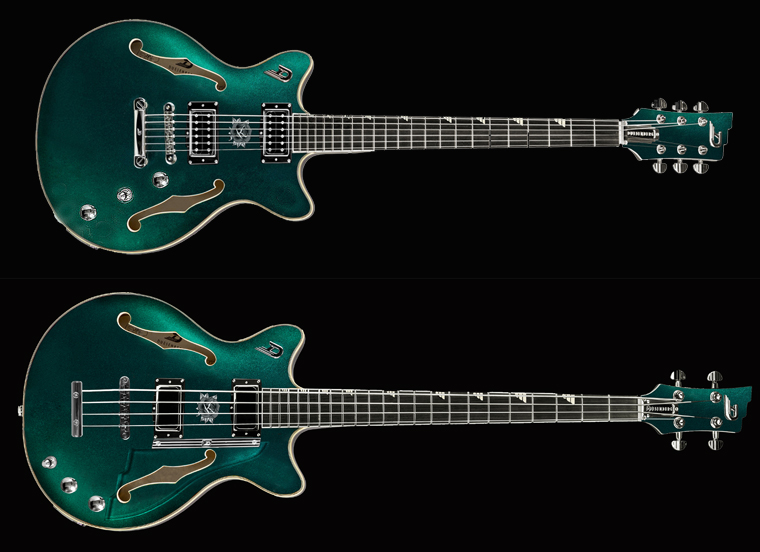 In late fall we moved into the renovated apartment in Malasaña and I rode my electric bike the 15 minutes to Ventas every day to continue my work in my old shop. Madrid is hilly like Rome, and with a little electric help on the bike, you can get around there. I also started to pack up some things for the upcoming move.

For Cádiz, I had planned to place my workshop on the left side of the first floor, with the sound booth on the right for practicing with my band, which was still to be formed. Soon it occurred to me that if we were to spend a small part of the year in Madrid, I would not have a workshop anymore. What to do if a guitar-relevant idea shot into my head that I couldn't realize then? Madrid is great in July and August when everyone goes to the sea. There you have your peace and quiet. And from December to February it's cool and extremely humid in Cadiz, so you're better off staying in the capital during those two months. That was the plan. So I decided to look for a small shop where I would be able to work with smaller equipment. Finally I found this former nail studio in the district of Chamberi in the Calle Medellin. It is about 40 square meters, enough to house machinery and other inventory. My workbench in my office was still there and I ordered it shipped to me in Madrid, along with the stock of material and small tools to I had there.

The Jazzmaster or Jaguar tremolo is, in my opinion, quite useless because it is sluggish and insensitive. So I integrated my recently realized tremolo construction into it while retaining the original base plate dimensions. Listen for yourself! It functions totally smoothly, soft and yet has plenty of travel up and down. And you don't need to mill or drill for the conversion!

Equally unsuitable and it’s better to replace it with a good Tuneamatic bridge. But the distance of the height adjustment screws is different. So I thought of threaded sleeves suitable for most original Jazzmaster®, Jaguar® & Co. to mount Tuneamatic- and other bridges which are on M4 grub screws. Simply either replace the existing sleeves completely with these or insert them into the existing sleeves and mount a good Tuneamatic bridge - the typical problems of a Jazzmaster® bridge are already a thing of the past. The mounting threads in the sleeves are placed eccentrically so that the bridge can be adjusted exactly to the distance of the grub screws by simply turning the threaded sleeves. And as always, it is important that the M4 grub screws do not reach too far into the bridge so that it can move with the tremolo!

As part of my Split King development, I was looking for a way to place our split switch mini toggles within easy reach for splitting without getting them in the way when playing. So they have to be placed lower! For this purpose I fixed them in an oval plate which could be adjusted to any height like with pickup height adjustment screws, so that the switch knobs on top could protrude out of the pickguard as far as desired. "Elevator Switches" was my working title. 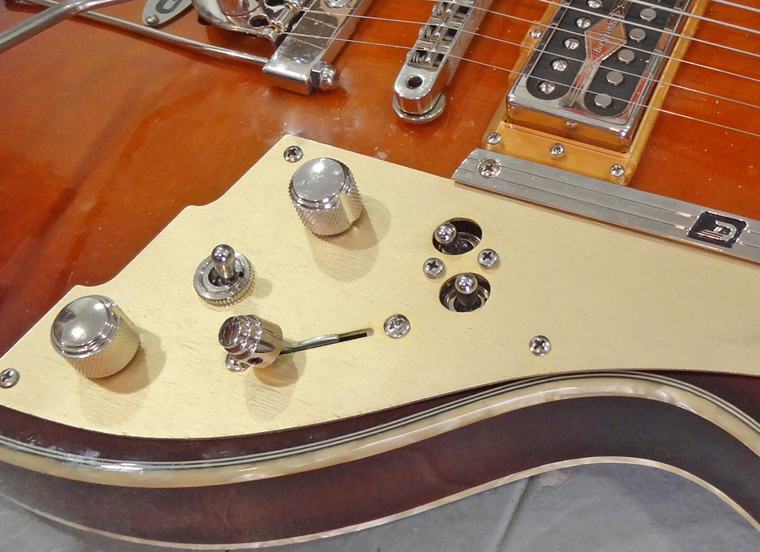 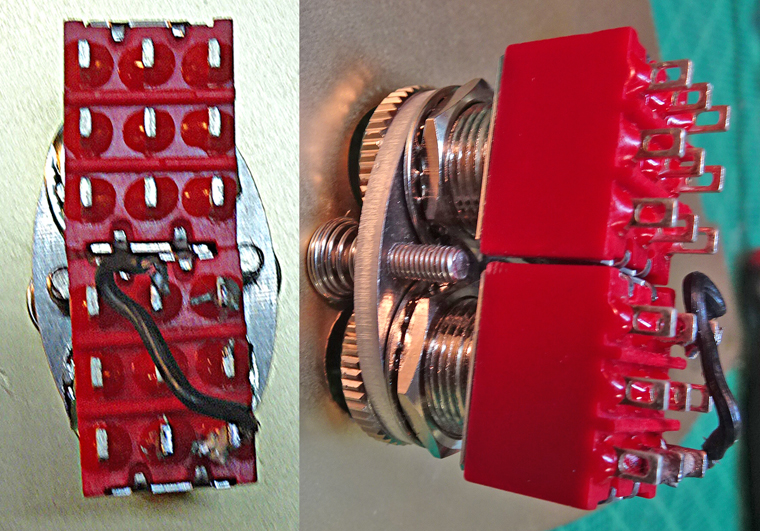 Correct saddle notching is one of the most complex processes in the assembling process. Our PLEK machine has recently been retrofitted with tiny milling cutters to make the saddle notches perfect. During plekking, the instrument is clamped and scanned, which results in not only the perfect fret heights but also the perfect depths of each individual saddle notch. So we had a saddle made that was about 1mm higher from the ground up and then milled off the plek from above, including exact cut-outs of all six notches.

I also wanted to integrate the Split-King-Humbucker into the Paloma. So further experiments ...

Oh, there we had it! göldo pots in the very best quality, made especially for us.

We lived again in the house of Wyoming and for my 66th birthday the Dixies (Dixie and Alma), who had visited us several times before in Madrid, because they were so enthusiastic about this city, and my daughter Jule came to visit us. A wonderful dinner outside in front of the local fish restaurant Jabega. Raimundo and his wife Antonia also joined us. 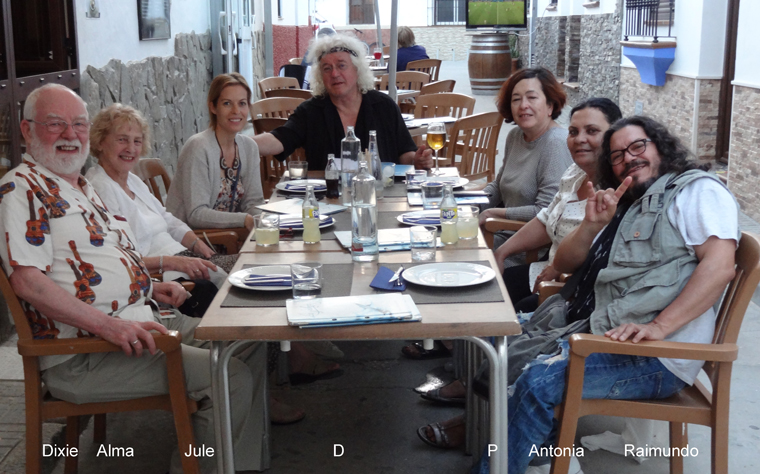 After dessert we went inside, and it turned out that one of the cooks was also a flamenco guitarist. So an excellent Andalusian fiesta was born. Raimundo as a prominent guest also played the guitar and a bunch of people freaked out. The Dixies had never experienced anything like this in their lives and stayed with us - although they were already over 70 years old - until the end late at night. Finally I got a rendition of "Cumpleaños feliz" (Happy Birthday), a totally amazing long night.

Yeah! Elegant and simple in all possible versions. Look out for this raised, three-tiered cap with the hole in the middle for stringing through! 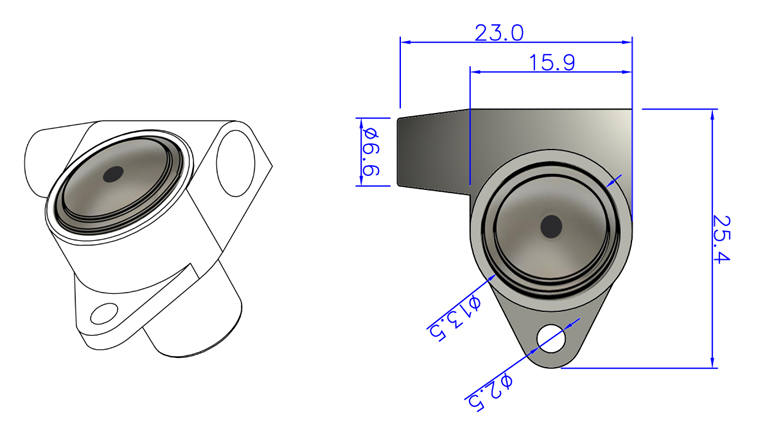 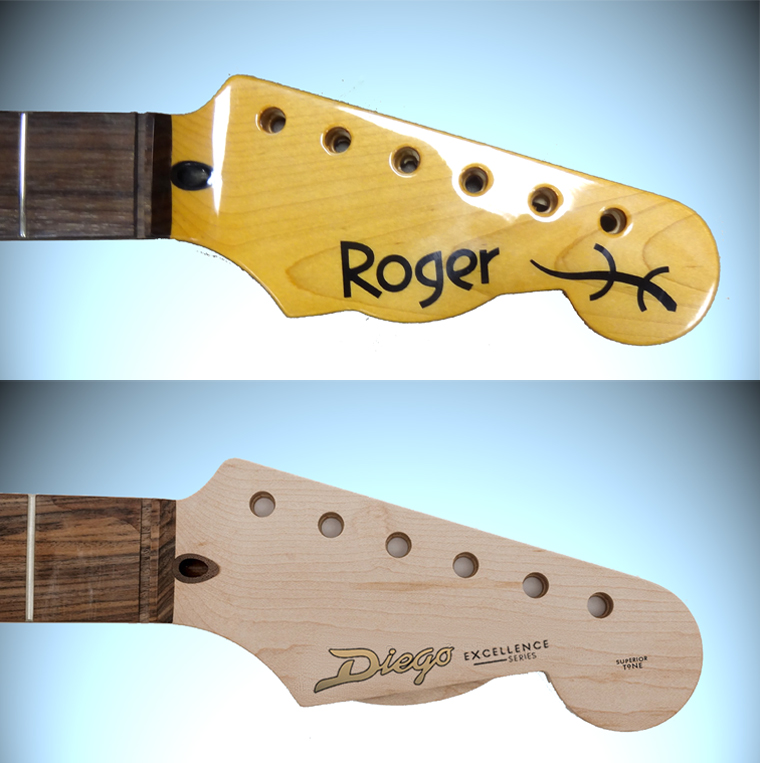 We had recorded the Los Dooros CD In the studio of José Nortes. Great sounds, but the mix was somehow not what I had in mind. So I brought Peter Pichl to Madrid. He was the bass player of our Duesenberg band at that time and had also produced our CD.  Pichl is a master of good sound and mixing.

We remixed everything in three days with José, so I was finally satisfied. By the way, shortly before that, Sergio Ramos (defender for Real Madrid) had sung a soccer anthem at Black Betty Studio. José is also a great guitarist who plays with Miguel Rios and others.