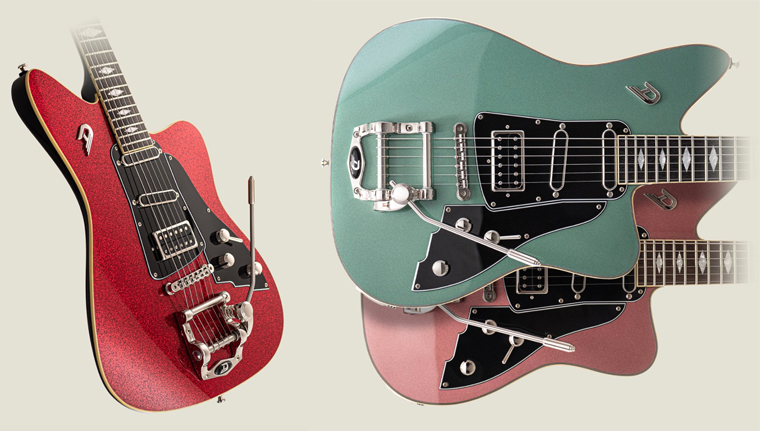 Great success with the "Paloma", which was to become our best selling model this year. 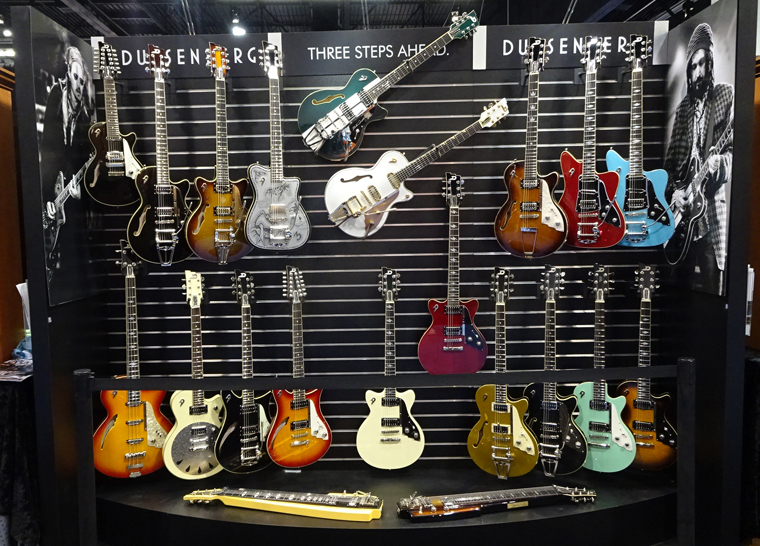 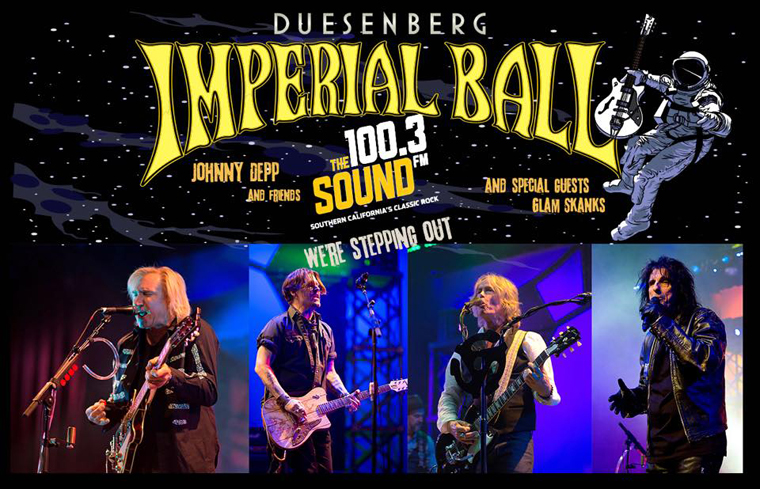 A very hip musician in California with extreme energy. And how beautiful: On his Paloma a sticker "NOT MY PRESIDENT" was emblazoned. 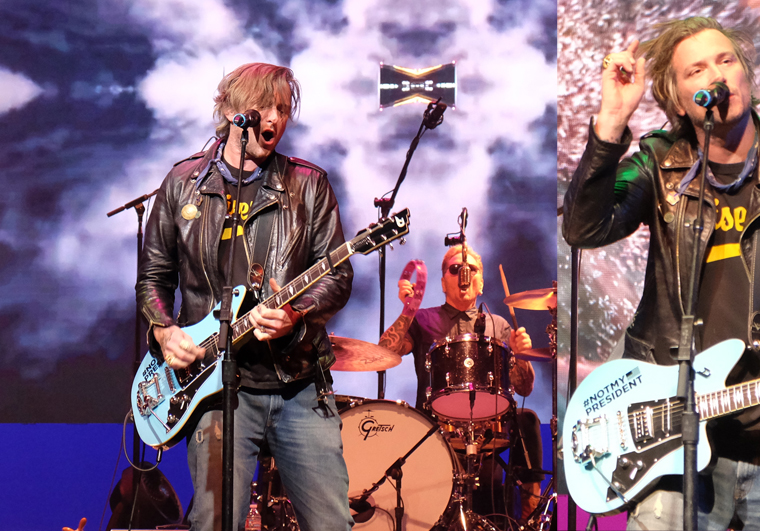 The NAMM visitors got big eyes and ears when they noticed what this guy does on the guitar. Raimundo's real job was to present the classical guitars of a Spanish manufacturer from near Toledo at the fair. 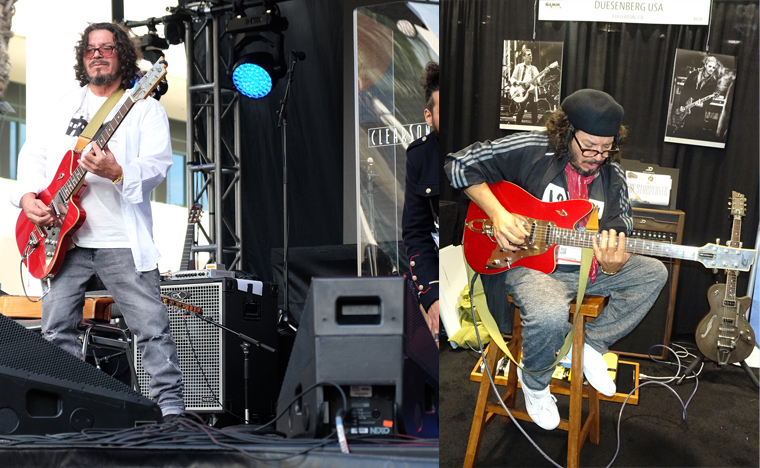 A respectable collection of our guitars in Fullerton. 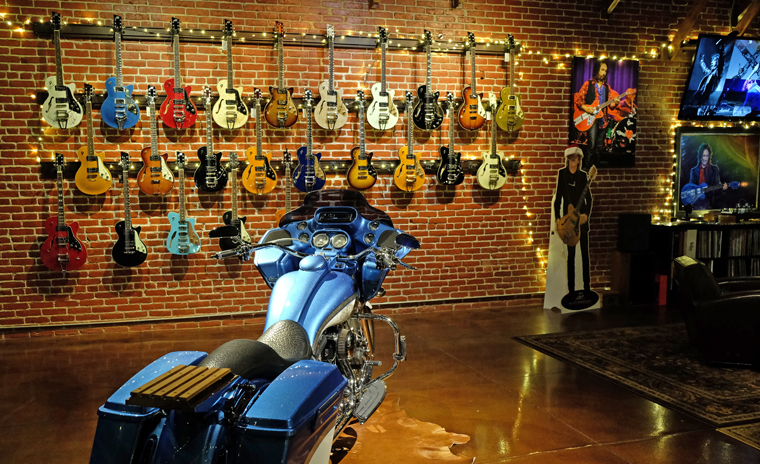 Once again in Heroes: in the middle Jim Crouch, who vectorized Johnny Depps tattoos and is also a good bartender. 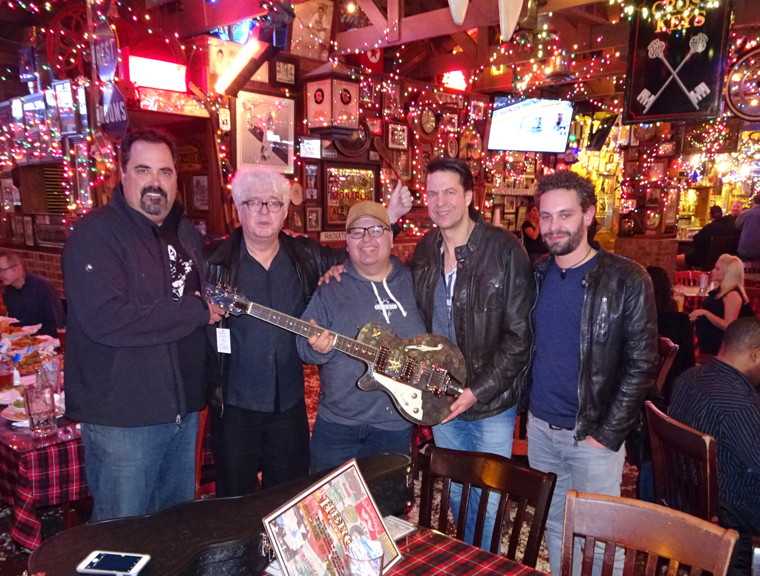 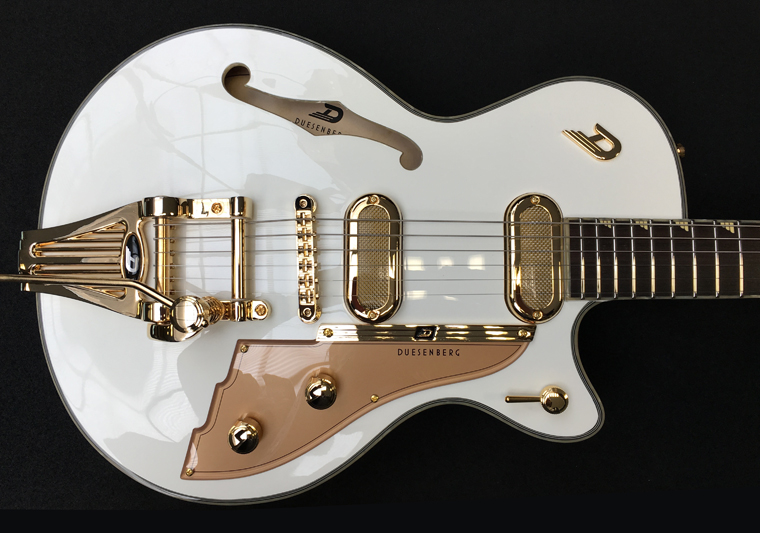 Wow, a jewel through and through: Radiator tremolo, our proven standard pickups in these new housings with a delicate wire mesh over the coils and the selector switch in the cutaway horn. What elegance! 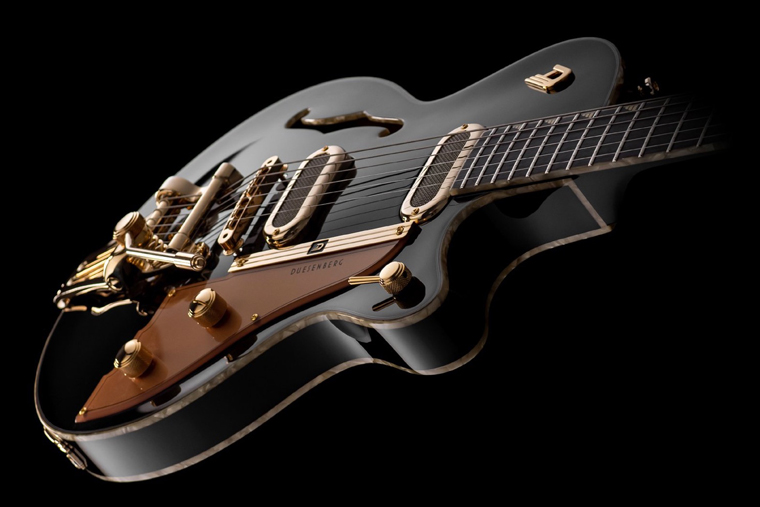 Here finally the slightly Wandré based design, as model name the name of my daughter. For this I developed the Split/King-Humbucker. The pickup housing contains a PAF-like and a Strat-like coil, which I made with a little trick not to hum in humbucker mode despite different winding data. If you switch to single-coil mode, you have a totally authentic Fender sound. In humbucker mode they sound really fat and even a bit more open than a PAF. The Julia also has a "Direct-Output-Switch", which puts the full bridge humbucker sound directly to the socket, passing all controls.

Here is a little soundcheck of the first split/king pickups. Pay attention to the authenticity of the Fender sounds!

One of Ingo’s friends runs a trucking company and had offered to make his semis available as advertising space. No sooner said than done!

This is really a spectacle. We went to Palomas girlfriend Maria José, who has a loft apartment from where you can watch the action very well. Groups from various parts of the city drag their saints on a huge platform through the streets. Among them are about twenty men who lift it up and move it forward. As a heretic, I shot this little video and discussed it directly.

The motor of my Schanbacher & Ebner router was a giant center with a double belt transmission to reach high speeds. But it also made a hell of a noise. So without further ado I ordered a modern Italian router motor with 18,000 rpm and attached it to the machine instead. This machine runs so perfectly that you can even work freehand, without templates. 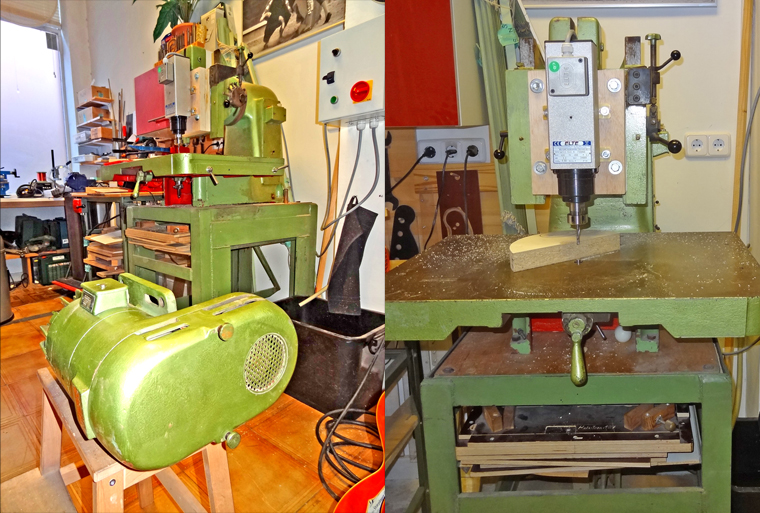 This year we wrapped with new guitar parts.

Wow, to my knowledge the world's first open machine heads with central fixing including screw sleeve for 10mm holes in the head plate. It could hardly be more beautiful!

What to do if you want to equip a guitar, which has the large holes for modern, encapsulated machine heads on the headstock, with vintage tuners, whose shaft measures only 6 to 6.3mm and which needs a hole of about 8mm from the top for the guide sleeves. Years ago we had already developed guide sleeves, which had the same collar on top as KLUSON sleeves, but had a diameter of 10mm on the bottom. However, this was still a shaky matter on the underside of the head plate in terms of centering. So I invented sleeves of 10mm diameter, which were inserted from the back of the headstock to take the Kluson shaft. They still have a small horizontal recess to avoid getting into the enclosure with the tabs that connect the KLUSON-covers with the lower housing.

We also finally had our own DROP-STOP strap holders that could be clicked into our and other end pins. They have a longer and tighter thread than Schaller's, so it was easier to insert them into the guitar strap. 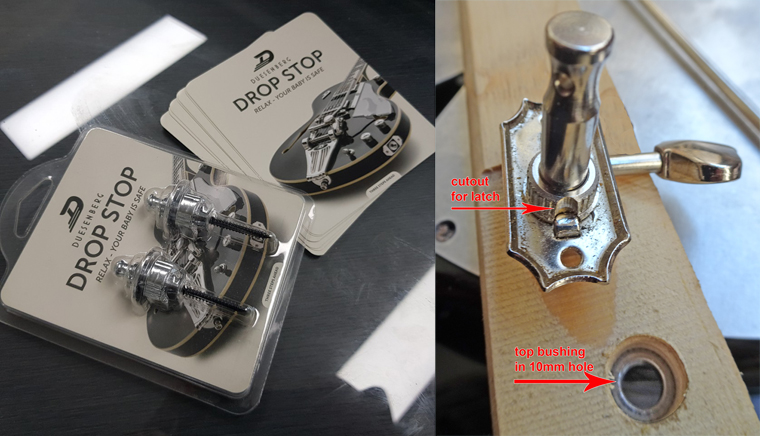 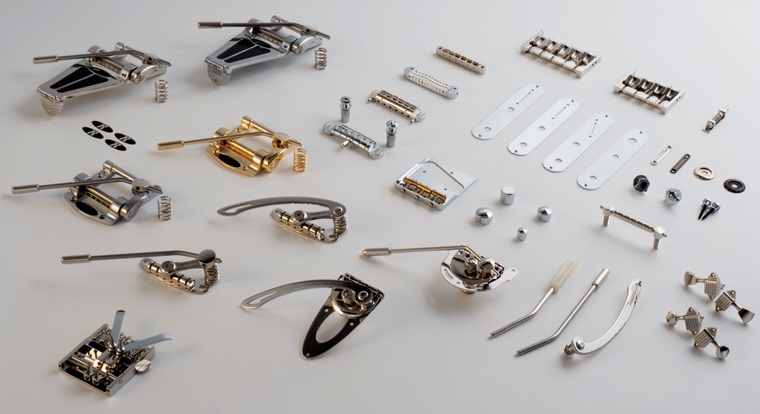 I have always hated mini switches. These tiny things have no place on a guitar. So we had some made that have the same base, but the solid dimensions of a toggle switch with 12mm thread and a thick lever knob on top. And also an ON-OFF switch with one more level, which allows additional functions when switching. 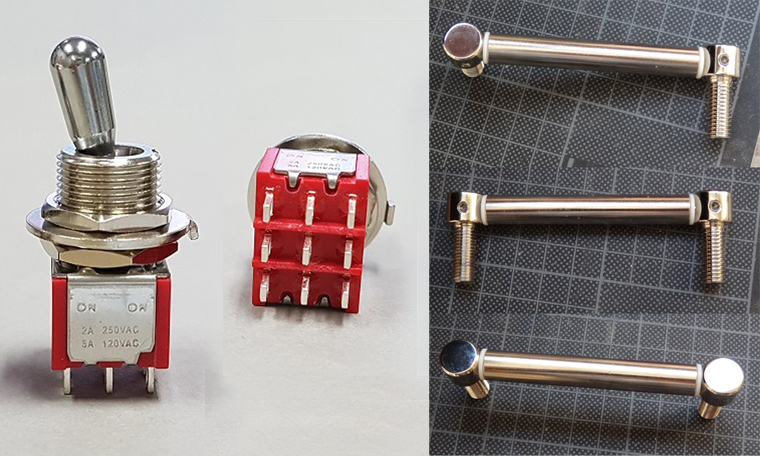 And a low-pressure roller that can be mounted in the stop-tailpiece threads if you want to install a "horse-shoe" style trem system on a Gibson solidbody without having to drill four holes in the ceiling. Larger trem systems with pressure roller also sit too close to the bridge, which can cause problems such as ineffective tremulation and excessive string breakage. The downholder now allows you to mount a trem system without a pressure roller, bringing the strings to the level of the bridge with the correct, adjustable pressure.

Our "Tremola", as well as the Radiator tremolo, have a very Duesenberg specific "corporate design". With the idea in mind of not selling these two separately anymore, we came up with a more neutral design without any three-tieredness. Tremolos that you can confidently offer to other guitar companies and luthiers.

A model which we only launched years later.

Invented, but not yet implemented ...

Our agent at the time, Bernard Ayling, who not only sold our tremolos in the USA, but was also a clever vintage dealer, gave us some interesting information about the "Tune'o'matic Bridge":  Bernard knew from a fairly reliable source to report that the Tune-o-Matic Bridge of the Ted McCarty 1954 - before it was produced and launched - was still different. He is said to have equipped the saddles with very simple, conical coil springs before he invented this rattling spring clip. But the clasp was much cheaper to produce than the six springs, and the saddles could be mounted much faster due to these now upward "filed up" former drillings. It can no longer be verified whether the six screws for octave adjustment also led into the case on the side opposite the screw heads. If so, this construction was still not perfect, because each saddle rests on four points - on the two screw ends and on the two lateral "shoulders". Rocking and rattling pre-programmed! 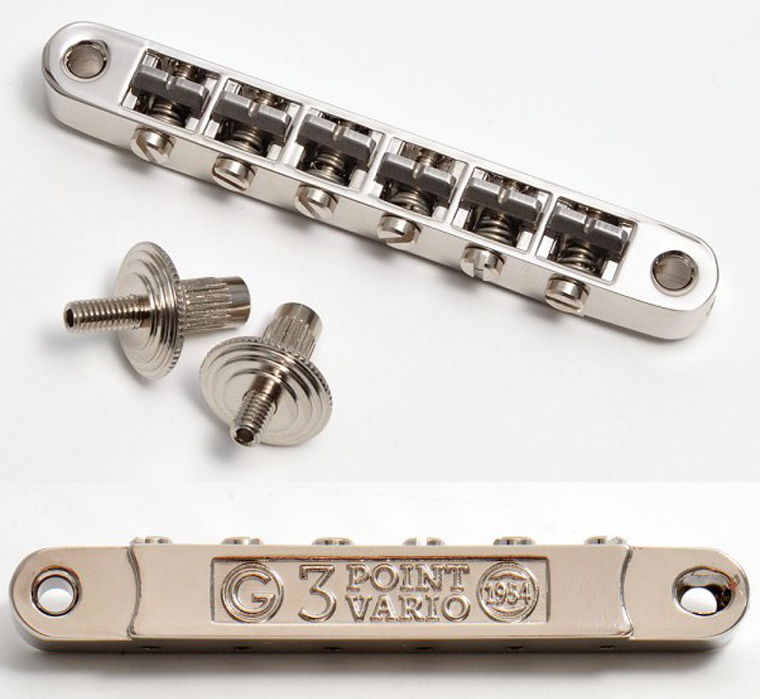 But we put the good part of this old idea into practice and - nobody knows if Ted had it that way - we also made the octave screws just long enough so that they don't reach into the other side of the case- we’d have a winner. This way each saddle rests on only three points - the absolutely safest construction to avoid wobbling and rattling and to allow the strings to produce a tightly articulated, sustain-rich sound.

Another invisible feature: one of the two 4mm holes for the height adjustment threads has a longitudinal hole underneath, so that our Ultra-Vintage bridge adapts to different spacings. And our saddles are made of stainless steel - perfect for the sound and preventing string breakage!

In order to test whether the octave screws could be moved by vibrations, I invented this maltreatment machine. See for yourself!

This was only to be put into practice years later ... 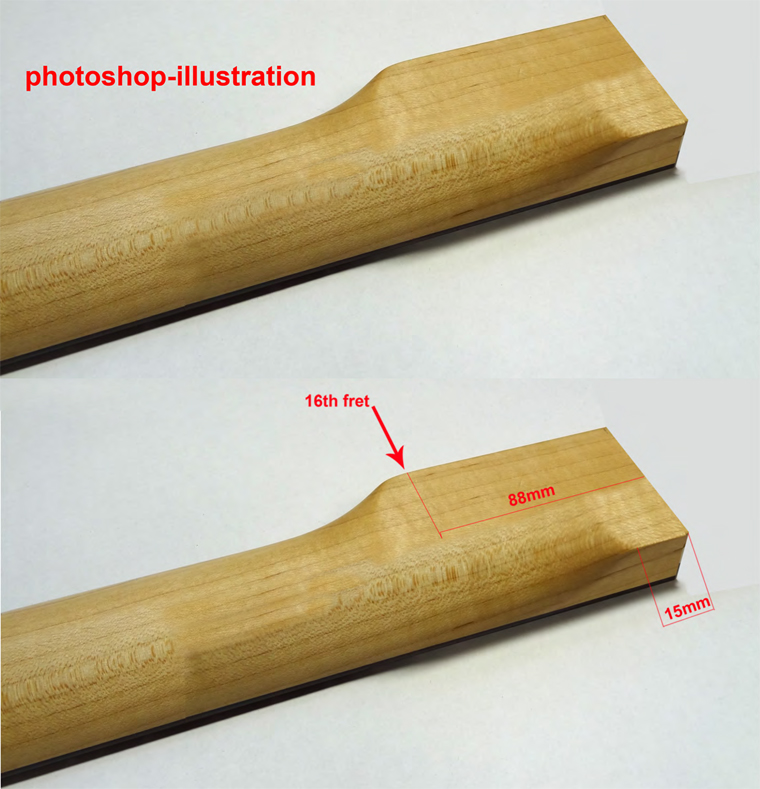 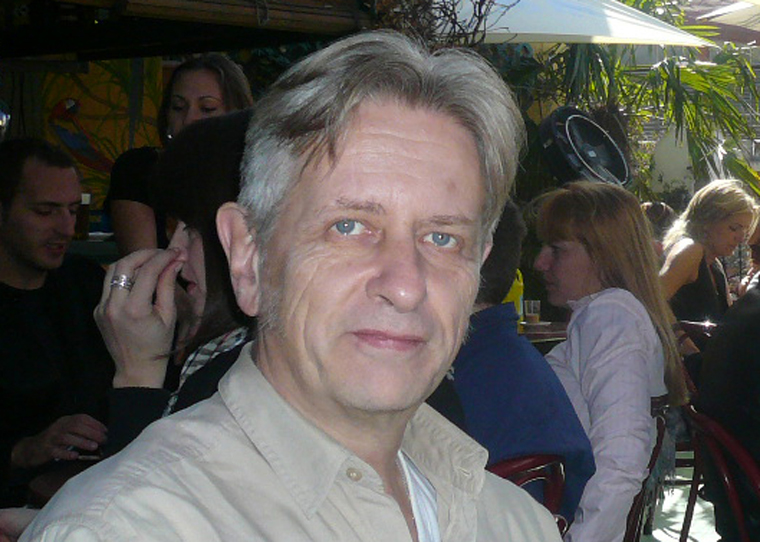 In autums, Heinz Rebellius, who had already worked for us as a freelancer before, joined us as a permanent employee. Heinz took care of customer inquiries and products. A great support for our team!

A Mannheim alternative to the Frankfurt Fair in the Beethoven House there. Heinz was also present at our booth. For my part, I stayed away because - as you will see - I had important things to do in southern Spain. 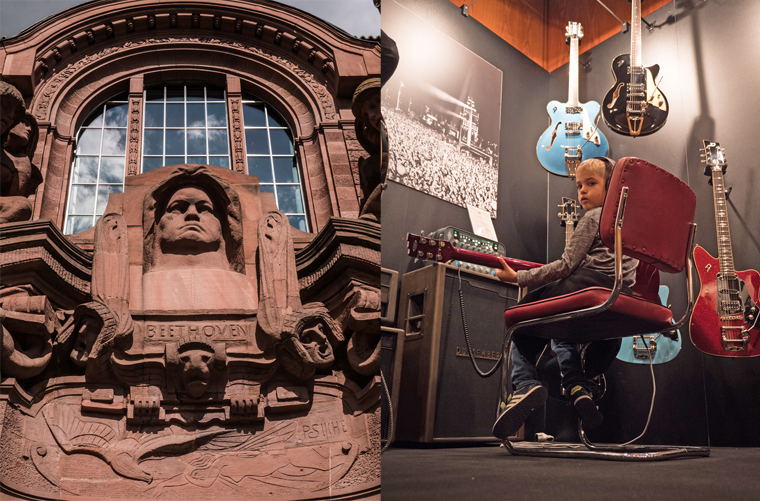 Yes, these two gifted designers on a visit to Madrid. Nice days with them. And there are certain "wall-like" tendencies! 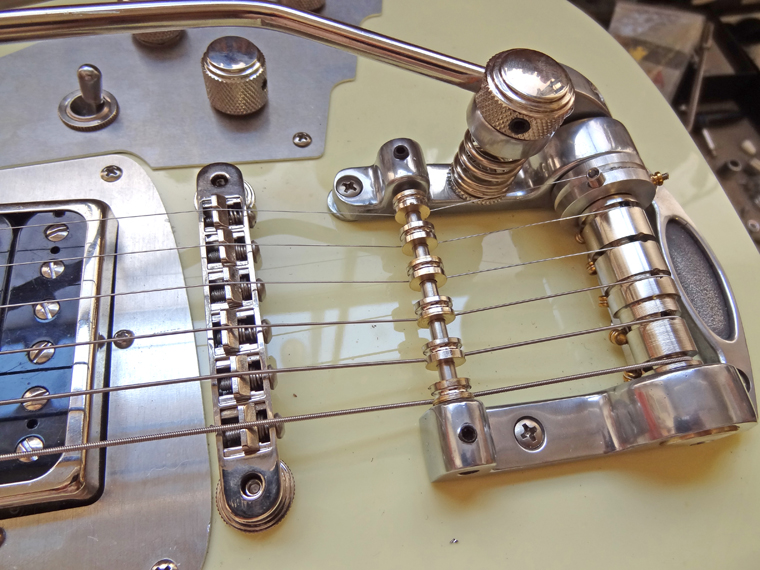 More daring experiments with the Trans Trem. Unfortunately the concrete zero point was missing. But already hot, this effect. Listen for yourself! 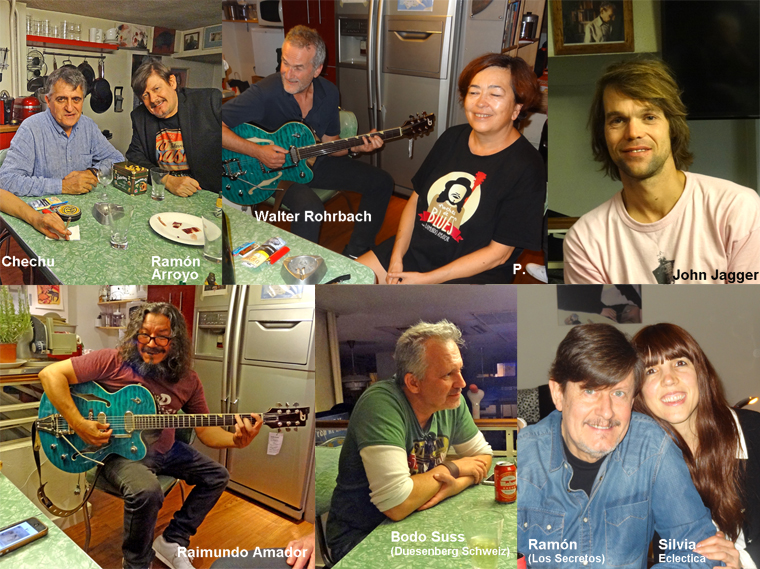 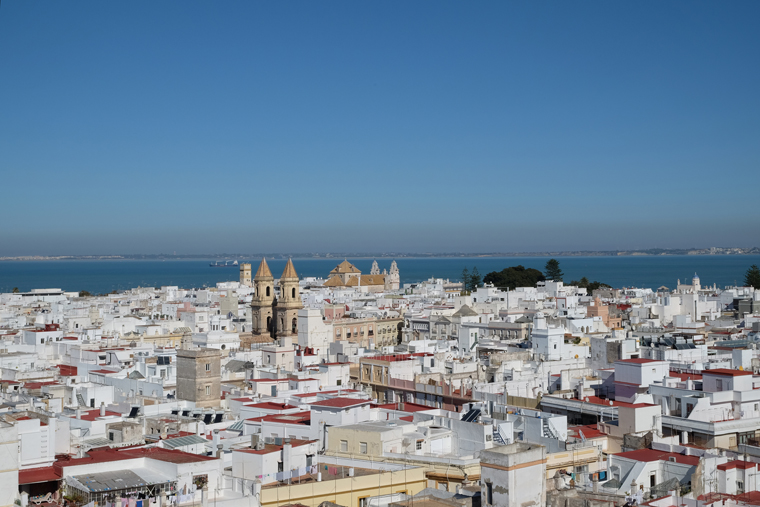 Because of our various stays in the house of the Gran Wyoming "Chechu" in Zahara de las Atunes, we often drove the 80km to Cádiz. This little town is a dream. Small, but totally urban, with a university and a fantastic fish and seafood market. 3000 years old, the oldest city in Europe. A lot of Moorish influence, narrow streets lined with orange trees, beautiful plazas, simply a dream! The third time we decided to visit, we decided to look for a house here! 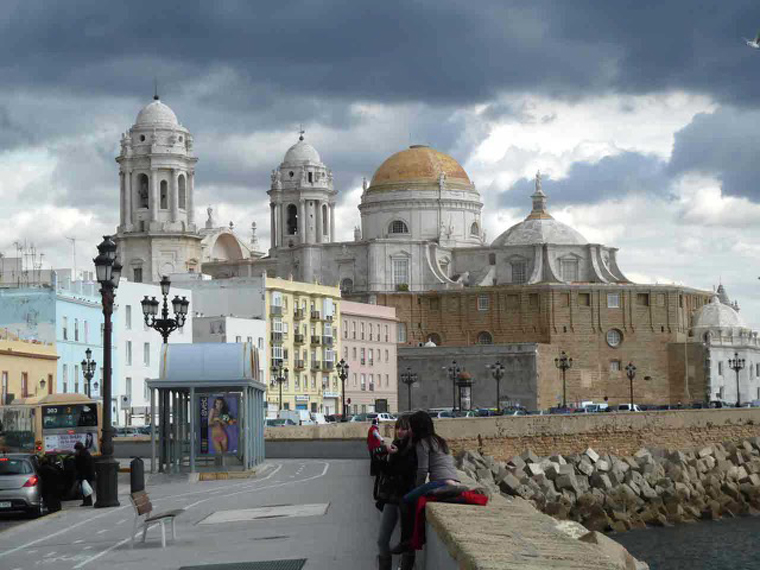 The search took some time, several appointments with real estate agents, visits of useless objects, but eventually we found it. 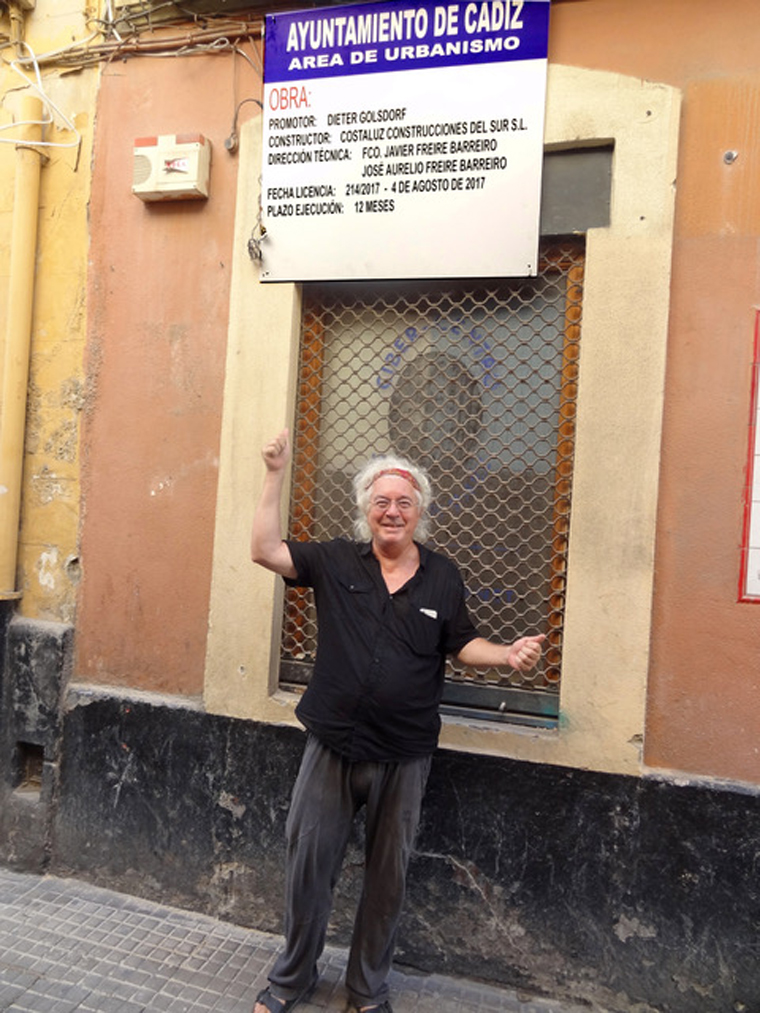 Practically a ruin. The houses here always have a patio (inner courtyard) in the middle, the top of the roof is glazed so that light and air can flow in. The previous owners, who had left this house over ten years ago, had closed this patio on both floors with glass blocks to gain more space. However, all this was threatened by collapse and had already been secured against collapse with steel supports. 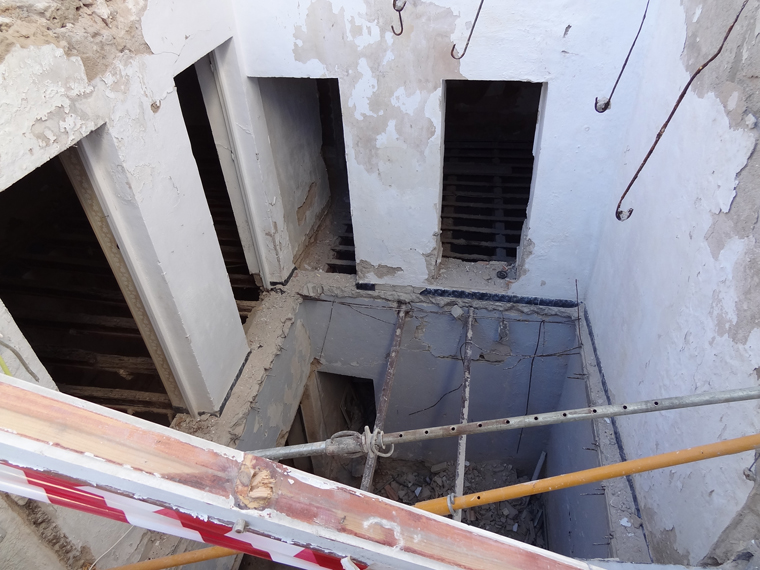 We found the house through the owner, who then carried out the renovation with our design proposals and with the help of an architect. This was a really complex project. First they had to remove the ceiling of the basement because the horizontal beams were totally rotten. You stood there at the bottom like in a church vault. Then the roof was dismantled and rebuilt. Then of course we had to tear down a lot of non-load-bearing walls because we wanted to have a more open look. This was also the case with the dilapidated staircase that led up to the second floor, most of which contained living space and a 20 square meter terrace. 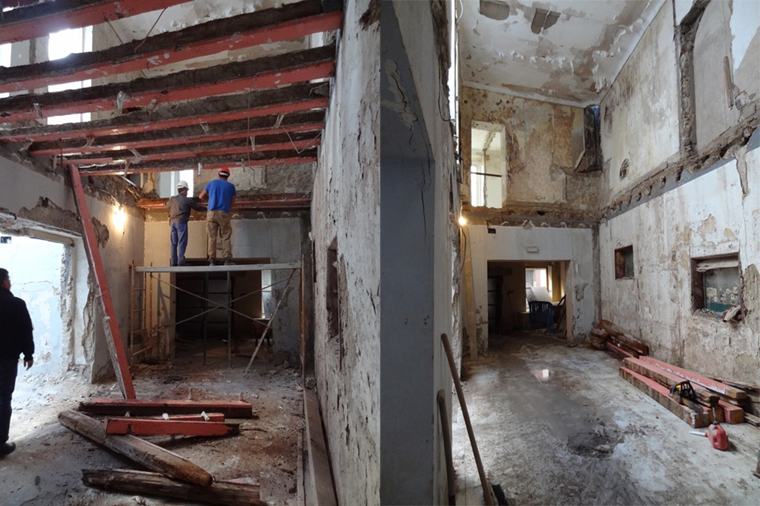 In Madrid we kept our working apartment for the time being and drove to Cádiz (650km) several times to inspect the construction work. The construction work took more than two years. And in 2020, in the days of the Corona virus, this respectable house could fully pay for itself, Cádiz being the Spanish city with the lowest rate of infected people in all of Spain. The sea wind blows the virus away! 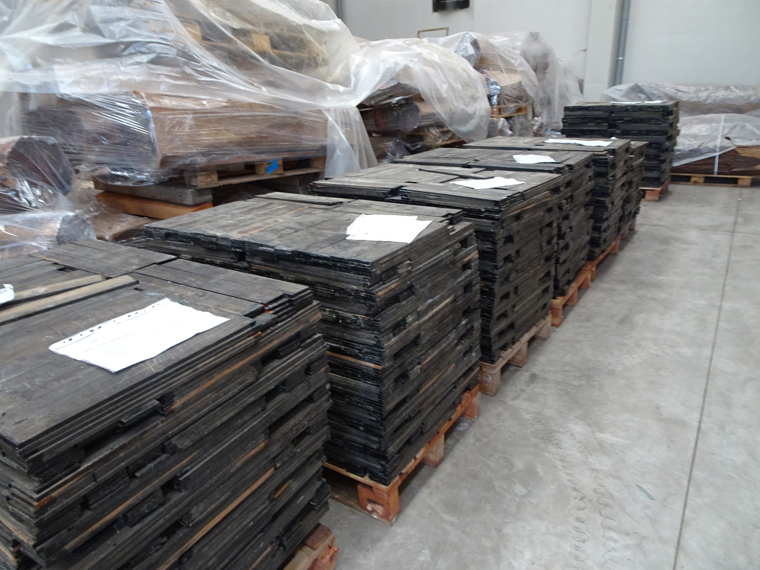 There is this super professional timber company about 25km away from Madrid, which has its own sawmills in Nigeria and India and just in the course of the curious ban on rosewood for the company Fender they shipped pallets of Pao Ferro fingerboards. 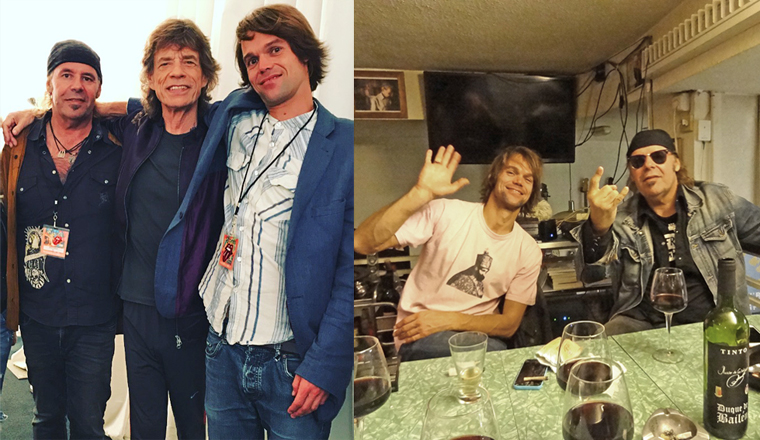 A somewhat strange story. Both have their residence in Ibiza, and Vargas had announced by photo that he would come along with Mick Jagger’s son.  John also sings and plays a little guitar, and Vargas wanted to get an electric guitar for him - free of charge, please.  Of course I let him have it, but we had a nice talk over dinner, and of course I mentioned to John that I knew his father. Then they left - without a guitar. Looking back, Paloma didn’t think that Mick Jagger had son named John. So we googled and found out that John is the son of my old friend Chris Jagger. The "uncle" is the Mick!  Well, the truth is not always taken seriously. 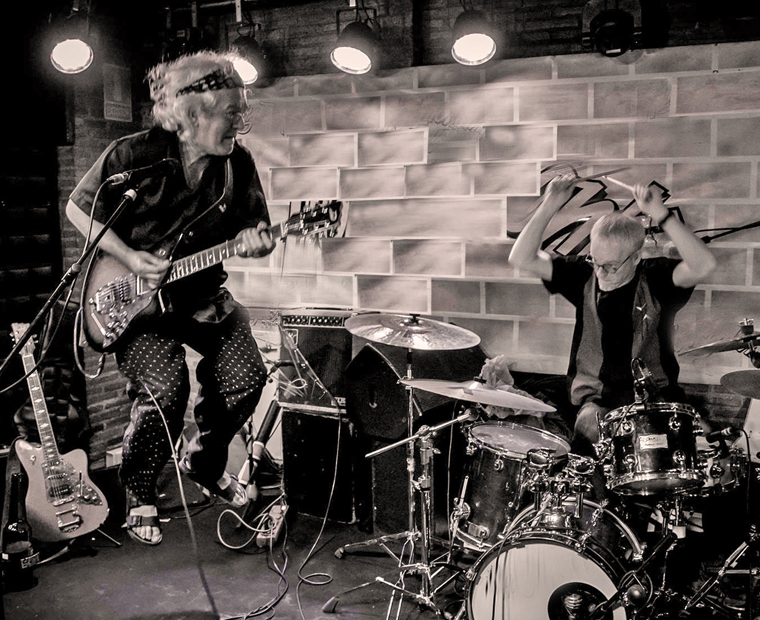 The beer can crusher 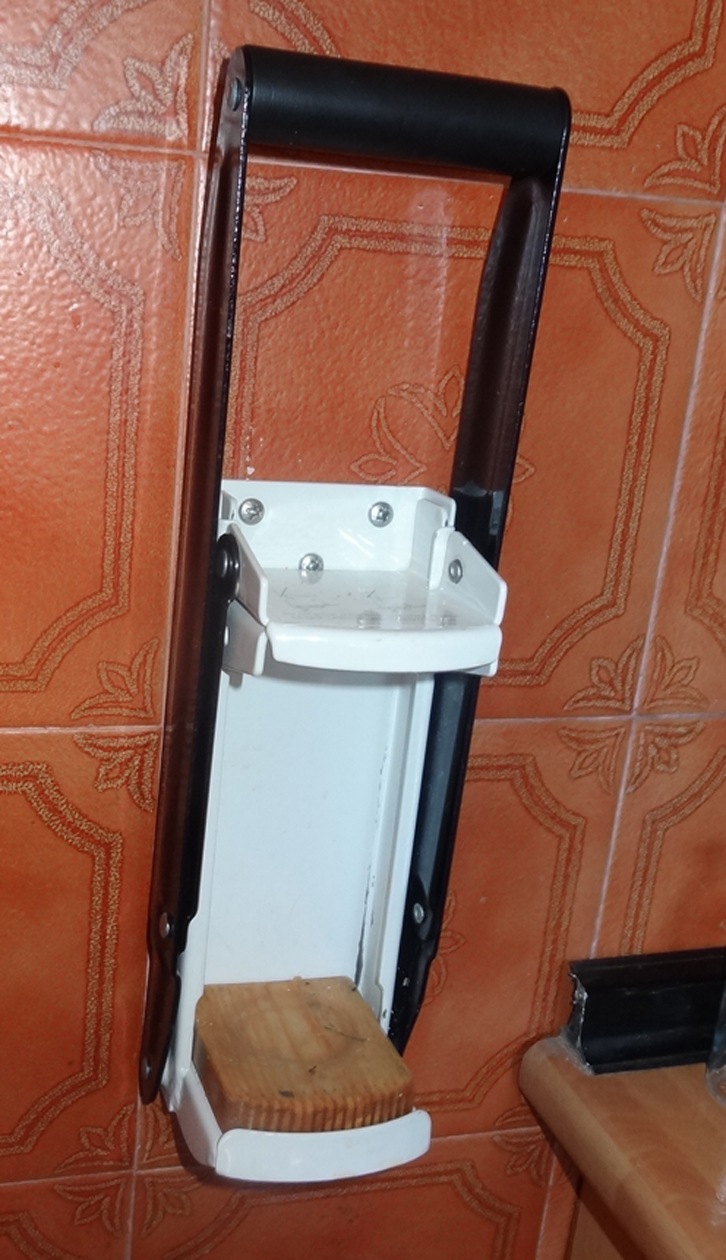 Finally, a nice invention, the way I love it.  A pressing tool that can be used to compress beverage cans so that they take up less space in the recycling waste. If you pull the black lever forward, the white top part goes down and crushes the can. Not recommended in Germany. You can only get a deposit if the cans are intact.