That's it for Los Angeles for now. I flew back with Paloma to Mexico City. Again a lot of anxiety at the L.A.-LAX-Airport. 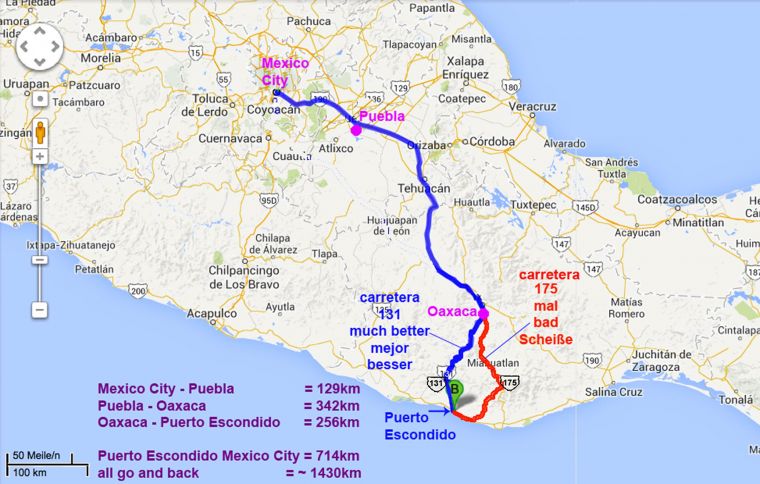 Statement of a Mexico vacationer: "Hmma dude, we made Mexico this time. Dude, this is the best thing you can do in January, February, specifically, make Mexico!"

Mexico is the most Spanish looking country in South America, rather rich and with a lot of ancient culture and also modern industry. But the goods don't seem to be distributed too fairly, so there is poverty and crime in some places. There are also a lot of demonstrations of the indigenous people. But 98% of the crime has nothing to do with the political situation, but rather has to do with the drugs that are smuggled into the United States. And first of all: We did not get robbed. But the traffic in Mexico City is "murderous". That's why public transportation such as the bus and metro is recommended (better than a cab or even a rental car!). Most popular cars: VW bus and Beetle, fabricado en Mexico! But Nissan is the clear market leader.

After a short time you get used to the local currency, tipping structures, differently working navigation systems in the car and even to the adventurous driving style in city traffic, which is a mixture of Spanish and Italian driving.

The Mexican himself is relatively educated, funny, very helpful and doesn't talk shit, like the US-American waiters drooling over the tip.

If you hear uncharming French, it is the Canadians, who by the way enjoy certain privileges in Mexico, while the common Mexican still has to endure incredible harassment when entering Canada. Oh yes, it can also come to punches ... (which is certainly not a purely Mexican phenomenon).

But - for me - the most important thing: food and drink. An unbelievable variety of fruits and vegetables (including the probably most aromatic tomatoes in the world). The Margaritas and Mezcalitas taste great and are very refreshing. Wine is only available in select restaurants. Food in all variations - from very cheap and correct to very, very good (tacos with meat, tomatoes, onions and coriander as a very cheap variation).  But there are also strange foods: small locusts (chapolines) whose taste is only created by the added chili-salt mixture, which is otherwise supposed to be high in protein and healthy), ant eggs - white, soft, expensive, tasteless and of course the worm in the mezcal. The lime is very refreshing almost everywhere! Beer: No Corona, but better Double X (2XX) or Victoria, here you go!  Turtles: Hunting and eating is prohibited. By the way, they only come ashore on protected beaches to lay eggs. Besides, the Mexican has something wonderful in the restaurants, which we don't have, a kind of "mute servant" - very space-saving, about waist-high stands, on which you can put your jacket, bag, scarf or whatever at the table. 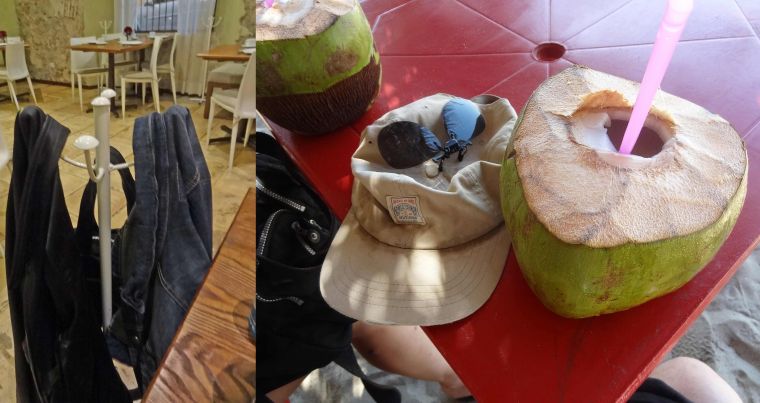 Country and people: The further south you travel, the smaller the people become. At least that is my first impression. I didn't notice any big differences in language, the "Mexican" Spanish is easy to understand. Only the sometimes "astonished" tone of voice would attract the attention of a native Spanish speaker.

From Mexico City we drove south with the rental car, first destination: the city of Puebla with its architecturally beautiful center and lots of bars and restaurants. Then we went on to Oaxaca, with about 250.000 inhabitants rather a small town, but still situated about 1,500 meters above sea level. Again a beautiful "Zócalo" the center of the old town (Plaza De La Constitución). And every now and then guys appearing totally “in character”, as you only know them from Tarantino and Rodríguez movies. 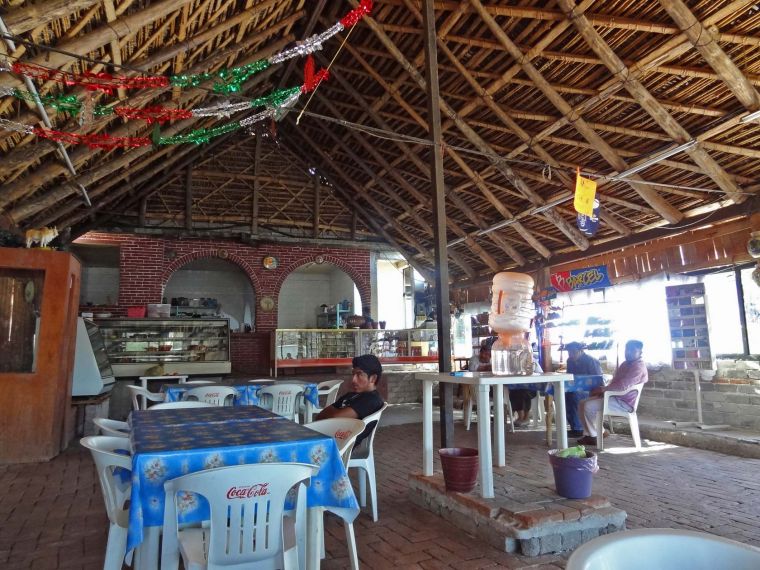 Further south, the roads get worse: you can't get used to these eternal speed bumps ("topes" or "Reductores de Velocidad") on the country roads and village crossings. For a distance of 250 km, you can easily be on the road for seven hours. You can get tired of it, especially since many of these chicanes appear without warning and you brake screaming at the last second, fearing for the shock absorbers and hopefully without hitting the car roof with your skull, rumbling heavily over this nasty stretch. 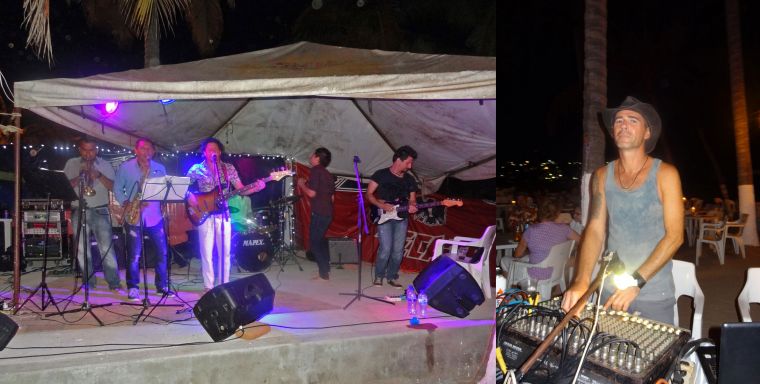 But finally you are rewarded, it becomes tropical: jungle sounds, crazy bird cries and finally the sea. It becomes windy. We are in Puerto Escondido, a hotspot for surfers from all over the world. Incredibly wide, almost completely empty beaches and this pretty village on the Pacific Ocean. Hotter than 30 degrees at noon and around 25 degrees at night. Canadian blues bands and Mexican funk bands are playing. And it’s a small world: At the mixing board stood Paul, a former Duesenberg and Graph Tech employee who was also responsible for the Duesenberg patented saddle.

Adios Mexico, it's time to go home. This year there were no direct flights Madrid-Los Angeles. So in the morning, back to L.A. with Aeromexico. Check out there, pick up the suitcases from the conveyor belt and check in with American Airlines, the self-proclaimed most important airline of the most important state on our planet, for the flights via London to Madrid. At least that's the plan ... Then you have to endure this hysterical security check and then you have to drink a certain amount of alcohol in a bar for the flight. About one hour before departure I go to check the display boards: Flight canceled! So we are shuttled to an AA service center, where four retired idiots are sitting at their counters, three of them on the phone. There are about 20 passengers in the queue. Handling time per person about 30 minutes.  - Then the first of the four AA pensioners left ... and never came back. Then the second one left, whom I had already run after and shouted "he should do his job and get the people out of there!”  When the third one started to leave, I completely freaked out - but without any real success. That was obvious. In front of us in the queue there was a Dutchman who spoke German and signaled me that he was promised a flight home with a stopover in London - but two hours later.

Finally, it was our turn and I insisted on a flight home to Madrid via London. This seemed to work out and we left this terrible place, where, by the way, you were only allowed to have an alcoholic drink in a restricted area. Two terminals back and to Virgin Air. There we looked stunned at our boarding passes: "But there is no more room on this plane!

Close to a heart attack ... The AA person had simply printed out two "blank" boarding passes without a seat number and furthermore had not informed anybody at Virgin! But we were told to wait until 8 pm to be sure. Maybe there was still something available. And so it was and we left Los Angeles with a delay of about four hours. Then another hour delay in London, so that we finally arrived in Madrid at midnight after 34 hours of travel.